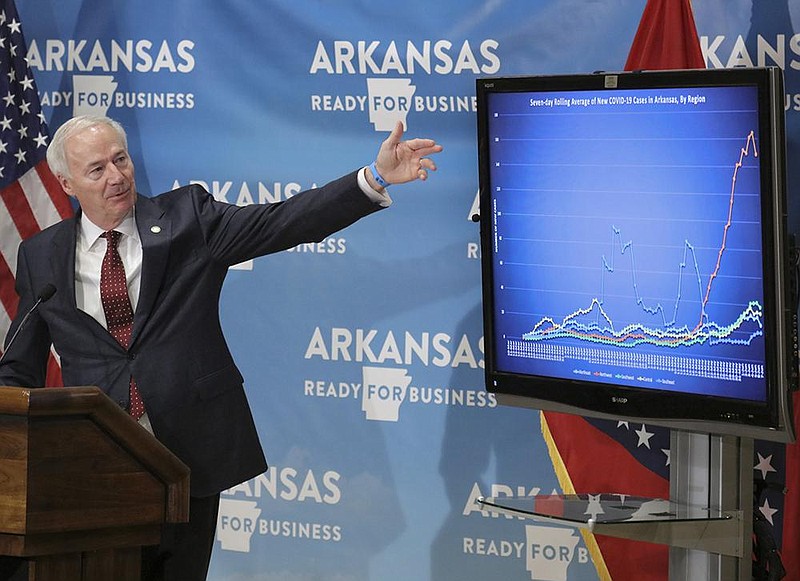 Gov. Asa Hutchinson goes over the latest coronavirus figures on Monday during a briefing at the state Capitol in Little Rock. More photos at arkansasonline.com/69covbrief/. (Arkansas Democrat-Gazette/John Sykes Jr.)

Northwest Arkansas continued to see the bulk of new coronavirus cases reported in the state Monday as health officials declared that hospitalizations had reached a new high.

The state Department of Health recorded 314 new infections over a 24-hour period, Gov. Asa Hutchinson told reporters Monday afternoon, bringing the state's total to 9,740. More than 40% of the day's increase occurred in Washington County, where an additional 86 cases were reported, and in Benton County, with 41 more cases, he said.

No other county in the state recorded more than 20 new cases, the governor said.

For almost two weeks, daily increases in the number of coronavirus cases have been measured in triple digits. According to statistics provided by the Health Department, the current number of active cases (2,955) and hospitalizations (171) in Arkansas were the highest since the virus was first detected in the state March 11.

[Video not showing up above? Click here to watch » https://www.youtube.com/watch?v=I0eK7YO5Y6s]

State Health Secretary Nate Smith said he was concerned about the new highs in covid-19 hospitalizations -- including 26 new patients recorded Monday -- though he said it was a "lagging indicator" reflective of overall case increases.

"Because we have had such an increase in the number of cases, it's not that surprising that hospitalizations would come next," Smith said. "I won't be surprised if we have additional deaths, unfortunately."

Arkansas recorded one death from covid-19 Monday, bringing the total to 155.

Despite the surge in cases localized to Northwest Arkansas, Hutchinson said he was not planning to abandon his statewide approach to rescinding virus-related restrictions in favor of a regional approach, though he conceded that doing so may become an option.

"I've been very firm in trying to keep the state moving forward together as a state and not divide us up to regions," Hutchinson said.

He later added, "We might stay exactly where we are or we might make adjustments, depending on what the data shows."

Hospitals both in the Northwest Arkansas region and statewide remained below capacity Monday, Smith said, while noting that the Health Department could help facilitate transfers of patients if needed.

"We're not in danger of exceeding our capacity, but we'll be checking with the hospitals that have received patients just to make sure that no individual hospital is being overtaxed," Smith said.

Two of the largest hospitals in the region, Mercy Hospital in Rogers and Washington Regional Medical Center in Fayetteville, said last week that they had recently added bed space to help care for patients with covid-19, the disease caused by the coronavirus.

Northwest Health, which operates five hospitals in the area, also said in a statement that it was "not currently at or near capacity."

Statewide, Smith said hospitals have beds and ventilators available to care for the current caseload. There were 46 covid patients on ventilators Monday, he said, an increase of 11 over the previous 24 hours.

Hutchinson said the state has more than 8,000 hospital beds available. However, fewer than 600 of those are intensive-care beds, according to a 2018 analysis by The Associated Press.

NO CASES LINKED TO PROTESTS

While none of the new covid-19 cases has been linked to protests over police misconduct that have sprung up in communities around the state, Smith encouraged testing of anyone who fears they are at risk of having the virus.

"Contact tracing is more challenging in a setting where people may be in a crowd or with a lot of people they don't know," Smith said. "We will do our best with that if we start to see cases that are associated with protests."

Hutchinson added that contact tracing is still being done on the hundreds of new cases identified over the weekend, though he commended both the protesters and Arkansans overall for continuing to heed the state's advice regarding precautions against the virus.

"If you look at today in face coverings, wearing masks, being socially disciplined out there and distancing, it is more predominant today than it was 30 days ago," Hutchinson said.

Regarding the protests, he added, "People said, 'We're gonna get out and this is important,' but they had masks on, and they tried to protect themselves and others."

The Greenwood Police Department in Sebastian County is recommending that anyone who came in contact with its officers last week be tested for covid-19 after one of them tested positive for the virus.

Greenwood Police Chief Will Dawson said Monday that the department quarantined three officers due to possible exposure to covid-19 on June 2. The other two tested negative Monday.

Three more police officers were added to quarantine Monday, Dawson said. They are in the process of being tested.

In Crawford County, an update posted on the Van Buren School District Facebook page Monday stated that the state Health Department had notified school district officials of a confirmed covid-19 case in one of its students. Health Department officials will notify any students or staff who may be considered close contacts. The district will not share any personal information to protect the privacy of students and staff.