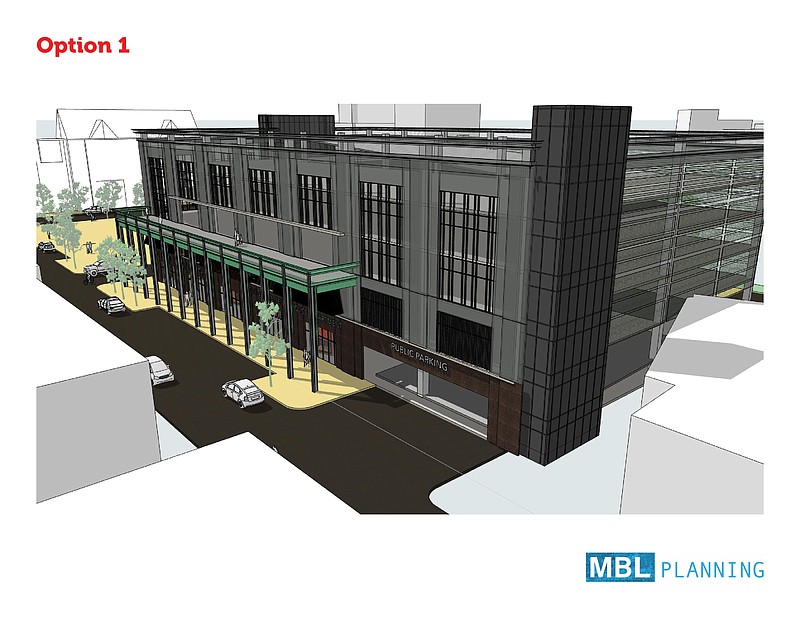 A concept of the new planned parking deck in downtown Fayetteville is shown along West Avenue. (Courtesy Photo/MBL Planning)

FAYETTEVILLE -- The City Council got a clearer picture Tuesday of what the arts corridor may look like.

Council members viewed concepts of the parking deck and Fay Jones woods aspects of the project, along with drawings of a planned liner building on Dickson Street. A flyover video of the entire corridor with concepts and placeholder buildings also was shown and posted to the city's website Tuesday.

The council didn't see concepts for a planned hotel and mixed-use building on the north side of Dickson Street, south of the parking deck, or concepts for another planned liner building on the southern end of the civic space, near West Avenue and Spring Street. Concepts for the civic space that will replace the parking lot at the southwest corner of Dickson Street and West Avenue have been posted to the city's website since late 2018.

The new layout has an outdoor public space between the depot and freight buildings. The hotel would take up the majority of the southeast corner of the depot parking lot. The five-story, 350-space parking deck, with space for retail and a police substation, would take up the northeast corner of the lot. The parking deck building also would be built in a way to allow two more stories in the future. An access way for cars would separate the two buildings.

The council was asked to choose between the two concepts and provide any feedback. Hoffman, who also serves on the Planning Commission, said basic ideas such as replacing the 290 parking spaces at the Walton Arts Center lot, lining West Avenue with retail facing the street on the first floor and connecting to the Razorback Greenway so far have driven the design.

"I think we can, and should, try to find more nuance in the program," he said. "I think that will always make a proposal like this better."

Construction of the deck is scheduled to start at the end of this year. 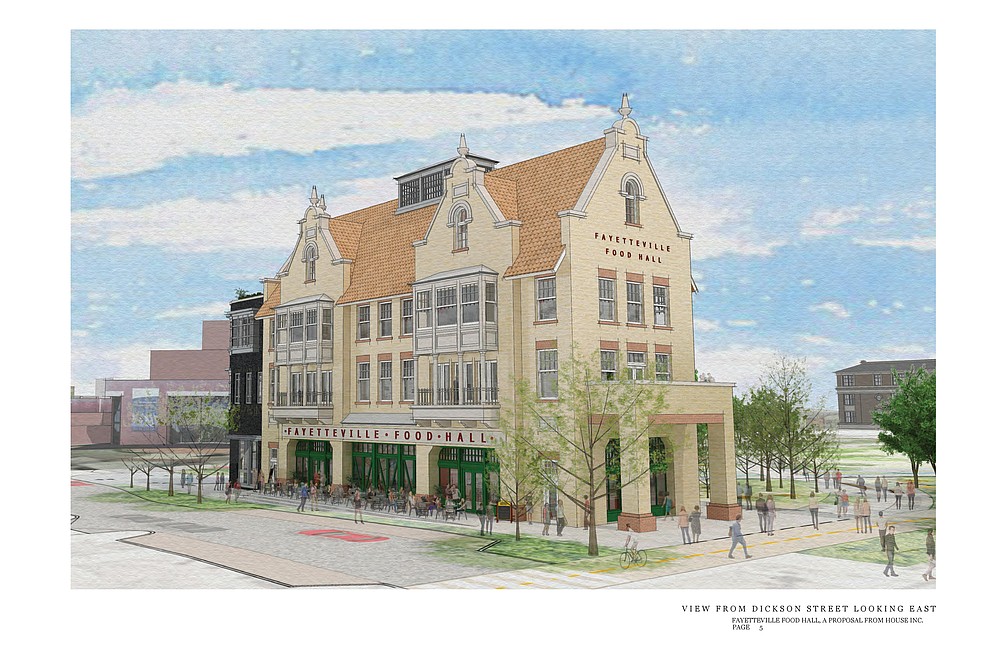 Rob Sharp, an architect representing Houses Inc., who also serves on the Planning Commission, showed the council concepts for the Fayetteville Food Hall. The four-story building would line Dickson Street at the northern edge of the civic plaza. A rooftop terrace would overlook the plaza.

Sharp said the idea was to have open spaces for people to come in and out on the first floor and provide culinary entrepreneurs options.

"Instead of having to come up with a restaurant and install a hood and buy everything, the food hall sort of sets all that in place," he said.

The second, third and fourth floors would be leased, most likely for commercial or office space, Sharp said. The exterior design pays homage to the depot and freight buildings, he said.

The boardwalk, pedestrian and seating areas at the Fay Jones woods will take influence from their namesake, the prominent Arkansas architect, said Zu Ponca with Nelson Byrd Woltz landscape architects. Work to remove invasive species and litter has already begun. Electricity lines along West Avenue will be buried to allow the tree canopy to flourish, she said.

A groundbreaking to turn the Fay Jones woods into a nature attraction is planned for next month, said Peter Nierengarten, the city's environmental director. The city also will ask local artists to design imagery for the construction fencing around the perimeter of the project, he said.

The entire project was made possible through a $31 million bond issue voters approved in April 2019.