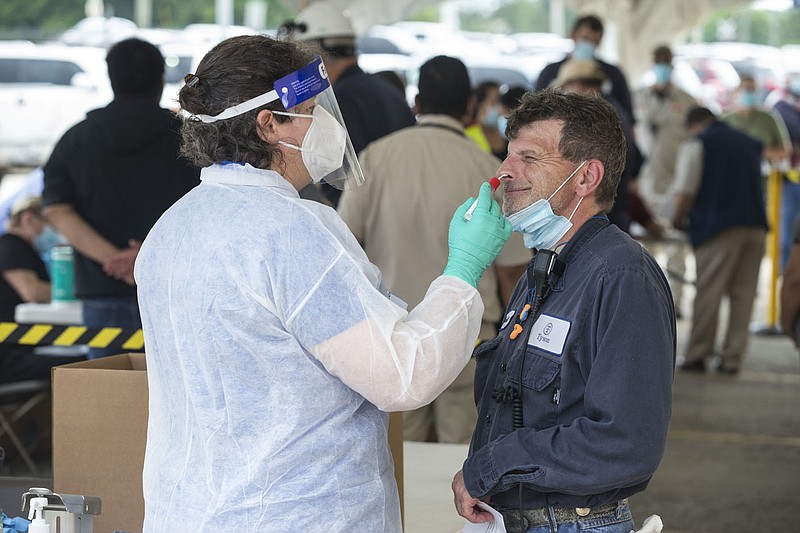 ROGERS -- Public officials and members of the media toured a Tyson Foods plant Tuesday morning shortly before it planned to test employees for covid-19.

The company has taken measures to help prevent the spread of covid-19 such as providing face masks and shields, installing barriers between workers, screening employees upon entry and staggering breaks to keep break rooms at half capacity, said Matt Evans, complex manager at the Chick'n Quick plant on West Olrich Street.

The plant also added three hospital-grade air filter systems to keep the air clean and dividers at tables in the break rooms.

The plant already had some sanitation efforts in place before the pandemic, such as hand sanitizer stations and smocks to be worn over clothing, Evans said.

The plant employs 917 workers, according to Derek Burleson, Tyson spokesman . The plant is about 260,000 square feet and operates two shifts, Evans said. 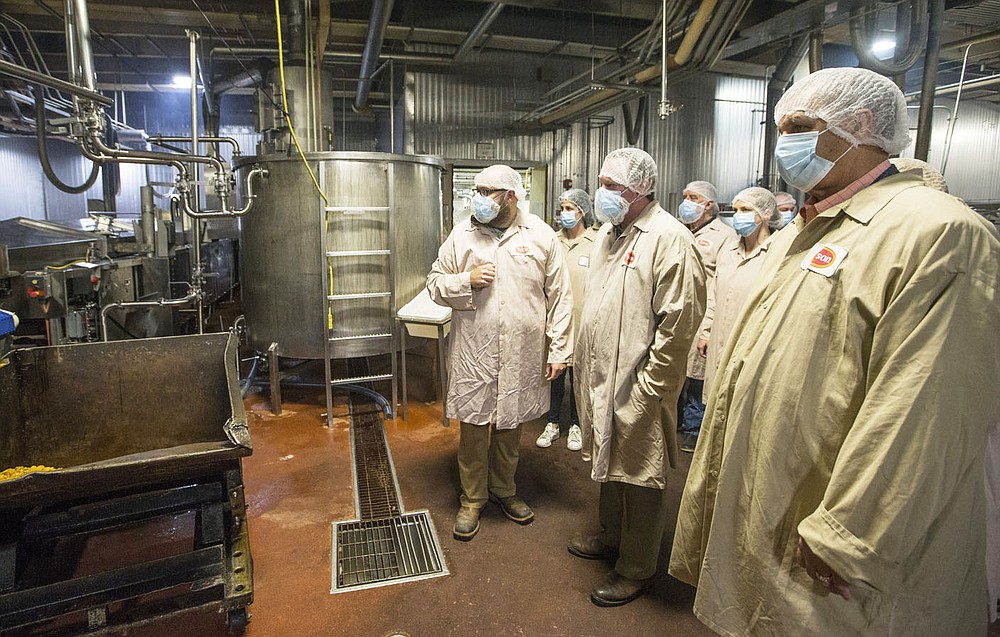 Northwest Arkansas is home to several poultry plants, and workers rights and immigrant rights groups have criticized the state's and companies' lack of protections for workers. Ozark Mountain Poultry, operated by George's Inc., has had the most covid-19 cases of any poultry business in the state. Its Rogers plant had 181 cases, with 76 recovered, as of Monday, according to the state Health Department.

The Chick'n Quick plant had 22 covid-19 cases, with five recovered, as of Friday, according to the Health Department.

Tyson staff guided officials through the plant's three main processing sections -- where raw meat is marinated and cut, where product is packaged and where it is packed for shipment.

Hines said it was phenomenal to see the company has implemented the changes, although it isn't mandated to do so.

"As an industry, these processes are going to become the new normal," Hines said.

Tyson has said it will test all employees who work at its plants in Benton and Washington counties, both of which have seen a spike in covid-19 cases, particularly in the Hispanic community.

Tyson employees who test positive for covid-19 will receive at least 10 days of paid time off, regardless of whether they have symptoms, Evans said. Employees must be free of symptoms for at least 72 hours before returning to work.

About 4,600 Tyson employees in Northwest Arkansas will be tested, according to Burleson. The tests are free for employees, and results of how many test positive will be made public.

[Don't see the gallery above? Click here to view the photos: http://nwamedia.photoshelter.com/gallery/Covid-19-measures-at-Tyson-Foods/G0000YsCxRQiMcTA/C00008TNt1KNcsTU]

Benton and Washington counties each had about 1,000 covid-19 cases as of around 3 p.m. Tuesday.