Fauci says virus is 'worst nightmare,' and isn't over yet

WHO walks back statement that asymptomatic transmission rare by Compiled by Democrat-Gazette Staff From Wire Reports | June 10, 2020 at 7:34 a.m. 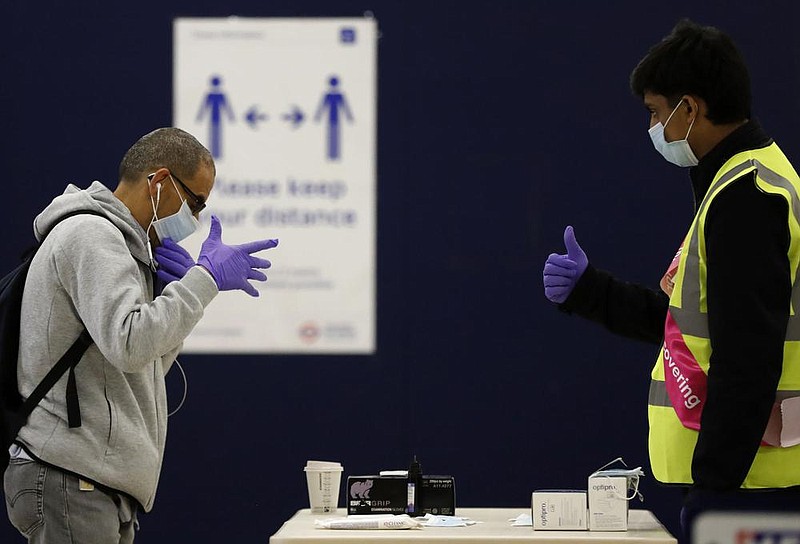 In a wide-ranging talk to biotech executives, Dr. Anthony Fauci delivered a grim assessment of the devastation wrought around the world by the coronavirus and said "it isn't over yet."

[Video not showing up above? Click here to watch » https://www.youtube.com/watch?v=tIRKj7ddlr8]

Meanwhile, the World Health Organization moved Tuesday to clarify its position on whether people without symptoms are spreading the coronavirus, saying much remains unknown about asymptomatic transmission.

Covid-19 is the disease that Fauci always said would be his "worst nightmare" -- a new, highly contagious and deadly respiratory infection.

"In a period of four months, it has devastated the whole world," Fauci, director of the National Institute of Allergy and Infectious Diseases, said Tuesday during a conference held by the Biotechnology Innovation Organization.

His discussion with a moderator was conducted remotely and recorded for presentation to conference participants. Although he had known that an outbreak like this could occur, one aspect has surprised him, he said, and that is "how rapidly it just took over the planet."

An efficiently transmitted disease can spread worldwide in six months or a year, but "this took about a month," Fauci said. He attributed the rapid spread to the contagiousness of the virus and to extensive world travel by infected people.

Vaccines are widely regarded as the best hope of stopping or at least slowing the pandemic, and Fauci said he was "almost certain" that more than one would be successful. Several are already being tested in people, and at least one is expected to move into large, Phase 3 trials in July.

But much is still unknown about the disease and how it attacks the body, research that Fauci described as "a work in progress."

He said he had spent much of his career studying HIV and that the disease it causes is "really simple compared to what's going on with covid-19."

The differences, he said, include covid's broad range of severity, from no symptoms at all to critical illness and death, with lung damage, intense immune responses and clotting disorders that have caused strokes even in young people, as well as a separate inflammatory syndrome causing severe illness in some children.

"Oh my goodness," Fauci said. "Where is it going to end? We're still at the beginning of really understanding."

Another looming question, he said, is whether survivors who were seriously ill will fully recover.

He described the pandemic as "shining a very bright light on something we've known for a very long time" -- the health disparities and the harder effect of many illnesses on minority groups, particularly black people.

The coronavirus has been a "double whammy" for black people, he said, first because they are more likely to be exposed to the disease by way of their employment in jobs that cannot be done remotely. Second, they are more vulnerable to severe illness from the coronavirus because they have higher rates of underlying conditions like diabetes, high blood pressure, obesity and chronic lung disease.

Given the disparities, he said, it is essential to focus more resources to control of the coronavirus in the areas with high-density black populations. But the longer-term solution will take decades, he said, to address the socioeconomic and dietary factors that contribute to so many of the health problems in racial and ethnic groups that have been most affected by the virus.

Meanwhile, a comment by a WHO official Monday calling asymptomatic transmissions "very rare," touched off a scientific debate over the unresolved question and attracted widespread criticism of the organization.

Less than 24 hours later, the WHO convened a special news conference to walk back its comments, stressing that much remains unknown. But the comment Monday had already spread widely and appeared to bolster arguments that people do not need to wear masks or maintain social-distancing precautions.

Calling the controversy "a misunderstanding," Maria Van Kerkhove, head of the WHO's emerging disease and zoonosis unit, said that during the news conference Monday, she was trying to respond to a journalist's question when she said asymptomatic transmission was "very rare."

"I wasn't stating a policy of WHO or anything like that," she said. "We do know that some people who are asymptomatic, or some people who do not have symptoms, can transmit the virus on."

While asymptomatic transmission does occur, no one knows for sure how frequently it happens. Studies and models have suggested that many of those infected never show symptoms. And it remains an open question whether they are a large force driving transmission. Some countries using contact tracing to work backward from confirmed cases have not found many instances of asymptomatic spread, WHO officials noted.

At the same time, WHO officials acknowledged Tuesday that some modeling studies have suggested as much as 41% of transmission may be attributed to asymptomatic people.

On Tuesday, Centers for Disease Control and Prevention spokesman Scott Pauley said it remains essential that people wear masks. "We know some people without symptoms may be able to spread the virus. That is why measures like cloth face coverings in public are so important."

Meanwhile, a study published Tuesday by the CDC on an outbreak aboard the USS Theodore Roosevelt that infected 1,100 crew members provided scientists with a critical test case into the asymptomatic and close-quarters spread of the virus among a relatively healthy and young population.

The CDC study of 382 young adult service members aboard in April found that 1 in 5 who tested positive reported no symptoms, while those who took preventive measures, such as face coverings and social distancing, reduced their risk of contracting the coronavirus.

As many countries gingerly start lifting their lockdown measures, experts worry that a further surge of the coronavirus in underdeveloped regions with shaky health systems could undermine efforts to halt the pandemic, and they say more realistic options are needed.

"Politicians may be desperate to get their economies going again, but that could be at the expense of having huge numbers of people die," said Dr. Bharat Pankhania, an infectious diseases expert at the University of Exeter in Britain.

"Doing that is extremely worrying because then you will build up a highly resentful and angry population, and it's unknown how they will react," Pankhania said.

The British government Tuesday ditched plans to have all primary-school children in England return to the classroom before the summer vacation after schools voiced worries about their ability to meet coronavirus social-distancing requirements.

In Brazil, Johns Hopkins University numbers showed Brazil had recorded more than 37,000 coronavirus deaths as of Tuesday, the third-highest in the world, just ahead of Italy. There were more than 707,000 cases, putting it second behind the U.S.

The Brazilian Supreme Court justice ordered the government of President Jair Bolsonaro to resume publication of full covid-19 data, including the cumulative death toll, after allegations that the government was trying to hide the severity of the pandemic in Latin America's biggest country.

The government complied with the decision Tuesday afternoon.

In Mexico, President Andres Manuel Lopez Obrador urged the country to stay calm after officials last week reported escalating fatalities that rivaled those in Brazil or the U.S.

South Africa's cases are "rising fast," according to President Cyril Ramaphosa. More than half of its approximately 52,000 confirmed cases have been recorded in the past two weeks, prompting concerns that Africa's most developed economy could see a steep rise in infections shortly after restrictions are relaxed.

After refusing to close mosques and opening up the country even as medical experts pleaded for stricter measures, Pakistan's caseload topped 108,000 Tuesday, with 2,172 deaths.

"The strategy has its roots in China, in the desire to eliminate the disease, but that clearly went out the window a couple of months ago," said Mark Woolhouse, a professor of infectious disease epidemiology at the University of Edinburgh.

"Many countries are now deciding that the cure could turn out to be worse than the disease," he said. Woolhouse suggested that countries unable to lock down their populations could focus instead on targeted interventions to protect those most at risk, such as people over 60 or those with underlying medical conditions.

Meanwhile, the U.N. secretary-general is calling for immediate action to avoid a "global food emergency," saying more than 820 million people are hungry, about 144 million children under the age of 5 have stunted growth, and the covid-19 pandemic is making things worse.

Secretary-General Antonio Guterres said there is more than enough food to feed the world's 7.8 billion people, but "our food systems are failing." 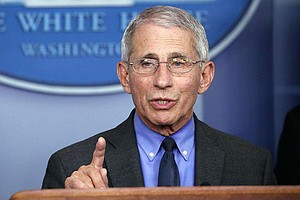 Photo by AP
FILE - In this April 7, 2020, file photo, Dr. Anthony Fauci, director of the National Institute of Allergy and Infectious Diseases, speaks about the coronavirus in Washington. With New York City at the epicenter of the coronavirus outbreak in the U.S. and its native-born among those offering crucial information to the nation in televised briefings, the New York accent has stepped up to the mic. Fauci's science-based way of explaining the crisis at White House briefings has attracted untold numbers of fans, and New York Gov. Andrew Cuomo's news conferences have become must-see TV. (AP Photo/Alex Brandon, File)
ADVERTISEMENT