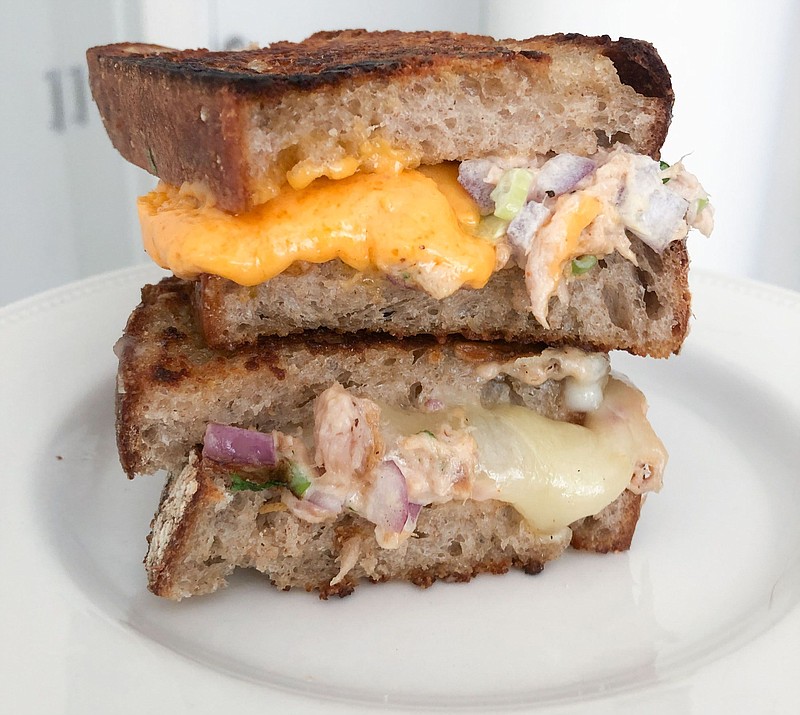 Tuna melt two ways: With cheddar and with pepper jack, which the author preferred. (Bloomberg/Kate Krader)

American home kitchens are in an unprecedented moment, where the most pedestrian supermarket staples can be as valuable as finicky homemade products. A household's most prized possessions can include a jar of sourdough starter just as easily as a can of Chef Boyardee Spaghettios.

Which makes this the perfect time to celebrate the tuna melt, one of the most supermarket-driven of sandwiches. It's made from canned tuna, mayonnaise, and sliced cheese from the dairy aisle-not dependent on decent produce, like, say, a BLT. What makes it shine now is the increasing availability of high-quality tinned fish.

The dish has been having a bit of a moment since March 1. According to a Reddit spokesperson, there's been an increase of over 30% in mentions of tuna melts across the platform, which includes an 18.7 million-member food community, compared with the same time period in 2019. Canned tuna references were also up more than 60% across Reddit.

Coincidentally, the sandwich is a highlight of the new The Tinned Fish Cookbook: Easy-to-Make Meals From Ocean to Plate by Bart van Olphen (The Experiment; $19). Van Olphen was once a chef at the 2-Michelin-star restaurant Lucas Carton in Paris. He's gone on to become a passionate sustainable seafood advocate: He advises British food star Jamie Oliver on the subject and has written cookbooks in both English and his native Dutch. In his 2010 award-winning Fish Tales, he chronicles stories and recipes from sustainable fisheries around the world.

His new book includes 45 recipes for different kinds of canned and tinned seafood, from anchovies and sardines to less conventional options such as mackerel. "Tinned seafood is considered secondary to fresh. But people should think of it as a way of preserving that's a technique that's so popular now and leaves you with a fantastic product," says van Olphen. He, of course, advises buying sustainably harvested tinned fish, especially for tuna, which is heavily overfished. Pole- and line-caught is especially good.

Van Olphen has a soft spot for the tuna melt, which combines creamy tuna salad with melty cheese within the crunchiness of fried bread. He notes you can substitute your favorite cheese for cheddar and even use a thick layer of salty grated parmesan. But it's hard to argue with a cheese that melts all over the tuna salad as it toasts in the skillet. (He also says you can switch out the canned fish in the sandwich, but who would want to do that?)

The former chef in van Olphen hacks the classic by making a homemade ketchup to serve as a dipping sauce for the tuna melt. It's a good, tangy, sweet tomato mix. But if you love a ketchup in a bottle, use that. Whether you want to go the extra step of making homemade sourdough bread for the sandwich is up to you.

The following recipe is adapted from The Tinned Fish Cookbook.

Hot sauce, such as Tabasco

4 slices cheese such as sharp cheddar or pepper jack

In a medium bowl mix the tuna, red onion, green onion, parsley, mayonnaise, and a few dashes of hot sauce. Season with salt and pepper.

Butter each slice of bread on one side. Divide the tuna mixture on the unbuttered side of 2 bread slices and top with the cheddar and then the other 2 bread slices, buttered sides up. Warm a griddle or cast-iron skillet over moderate heat and fry the sandwiches, carefully turning once, until the bread is crusty and the cheese is melted, about 3 minutes per side. Serve hot with ketchup.

In a medium saucepan, heat the olive oil. Add the garlic and red onion and cook over moderately high heat, stirring, until softened but not browned, about 5 minutes. Add the tomatoes, tomato puree, sugar, and vinegar and cook over low heat, breaking up the tomatoes, until thick, about 8 minutes. Let cool, then transfer to a small blender and puree. Season the ketchup with salt and pepper, and more brown sugar, if desired.