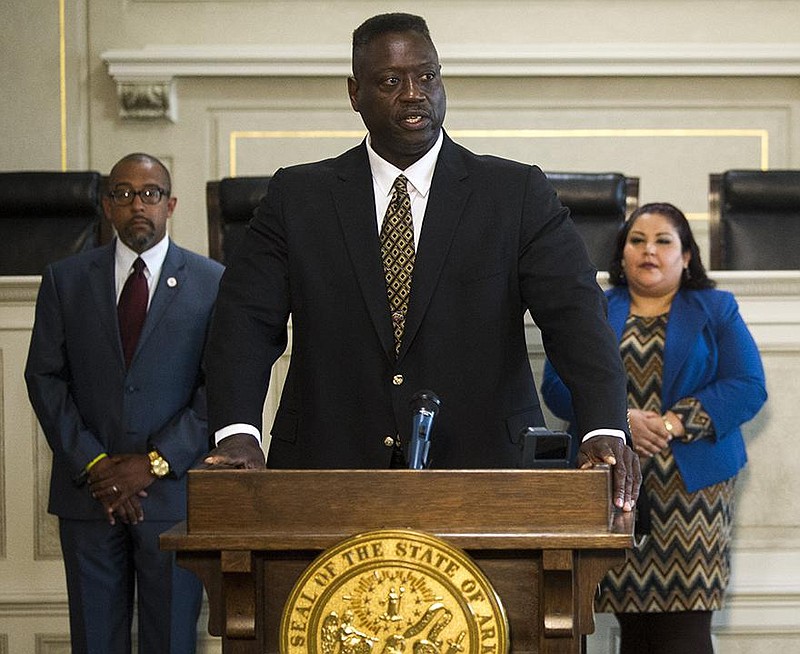 Gov. Asa Hutchinson assembled a new task force on Tuesday that will review Arkansas' standards for police training and operations, community policing and the disciplinary process for officers who violate protocol.

The commitment by the governor -- a former federal prosecutor who self-identified Tuesday as "law enforcement" -- to review police tactics was put forth after nationwide protests over police brutality and misconduct have persisted for two weeks after the death of George Floyd under the knee of a Minneapolis police officer.

The protests have sprung up in cities large and small across Arkansas, and have prompted calls by protesters and sympathetic politicians to overhaul police budgets and the use of force.

"I recognized what they are asking for ought to be done," Hutchinson said.

During protests at the state Capitol last week, organizers cited their upcoming talks with the governor to urge calm and adherence to a city-imposed curfew. Others chided the organizers, saying that their demands would not be met with serious consideration from the governor.

Ryan Davis, a former legislative candidate from Little Rock who has established a bail fund for arrested protesters, said he was optimistic despite what he called the "limitations of a task force."

"I hope the results of this are attention paid to some of the actionable items," he said.

The governor set broad parameters for the task force, and addressed a few specifics that he said would be within its purview, including use of chokeholds by police.

The chairman of the new task force, Fred Weatherspoon, deputy director of the Arkansas Law Enforcement Training Academy, said that choking maneuvers are not a part of current police training in Arkansas, though the governor added that there is no law prohibiting chokeholds. He said the task force would examine whether such a prohibition is necessary.

Campbell, from Little Rock, praised Hutchinson's outreach to protesters, saying that he had spoken to the governor three times in the past week. He said he talked to Hutchinson about his concerns about the militarization of police forces and the need for officers to develop familiar relationships with the communities they police.

"The black population of Arkansas has been really quiet for years in terms of how they feel about legislative change," Campbell said. "So I want to kind of mobilize people and get them out and get them aware."

While the governor said he expected the task force to examine actions that can be undertaken by both his office and the Legislature, he dismissed calls to "defund" the police that have been made by some protesters and proliferated on social media.

Ryan Davis, who said that calls to defund police have been misinterpreted by politicians on both the right and the left, nonetheless said he was not "dismayed" by the governor's position, noting that it is the same position on the idea taken by presumptive Democratic presidential nominee Joe Biden.

While a news release from the governor's office stated that the task force's full roster was incomplete, other members named Tuesday included Department of Public Safety Secretary Jami Cook; Sheriffs' Association Director Scott Bradley; Urban League of Arkansas CEO Scott Hamilton; and Rosa Velazquez of the advocacy group Arkansas United, as well as the mayors of Pine Bluff and Blytheville.

The governor said the task force will turn over its report at the end of the year and conclude its work.