Arkansas to move to Phase 2 of reopening Monday, governor says; new cases at 288 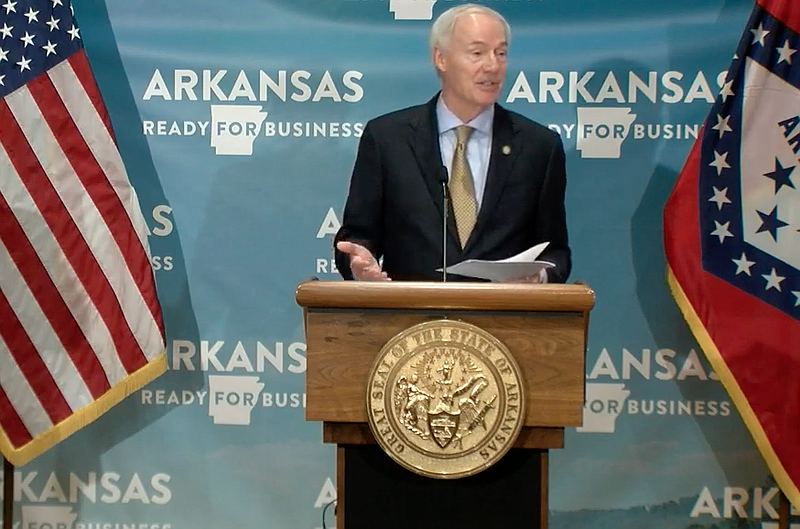 Gov. Asa Hutchinson speaks to reporters in Little Rock on Wednesday in this still taken from video provided by the governor's office.

Arkansas will move to Phase 2 of reopening Monday, Gov. Asa Hutchinson announced Wednesday, easing restrictions on restaurants and other businesses in the state.

The decision came as the number of active cases and the number of hospitalizations, the figure Hutchinson has long said is the best indicator of the outbreak’s severity, each hit an all-time high.

He said the total number of active cases is 3,087, including 138 in nursing homes, 199 in correctional facilities and 2,750 in the general population.

Smith said 181 people were hospitalized, including 49 on ventilators. Four more Arkansans also died of the virus, bringing the toll to 165.

Specific changes in restrictions under Phase 2 will be outlined in a directive from the Department of Health later this week, Hutchinson said, before going into effect Monday.

Many of the elements of Phase 2 as described in the White House’s “Opening Up America Again” plan have already been implemented in Arkansas, Hutchinson said, including allowing nonessential travel and youth activities.

Moving to Phase 2 will mainly change capacity restrictions in the state, Hutchinson said, with restaurants and other businesses that had been limited to one-third capacity allowed to move to two-thirds capacity.

Hutchinson said although cases are up overall in Arkansas, the criteria to move to the next phase were made with the assumption states would have curves like Louisiana or New York, with cases going high then steadily decreasing in a more traditional curve. He said Arkansas’ outbreak has been different, staying relatively low in its cases numbers but with more frequent rises and falls.

He added states do not see the criteria set out to move to each phase as “sacrosanct” and continued to attribute the growth in cases largely to increased testing. However, state data shows the positivity rate has not consistently dropped as testing increased throughout May and June.

The total number of coronavirus cases reported in Arkansas remained at 10,080 Wednesday morning, according to a state website. The death toll remained at 161.

Hutchinson said he will make an announcement Wednesday about "whether and when" the state will begin its second phase of easing restrictions that were designed to slow the spread of the coronavirus.

He declined to say whether that approach will include lifting restrictions on some regions before others.

[Video not showing up above? Click here to view » https://www.youtube.com/watch?v=H-1pSNiLOSo]