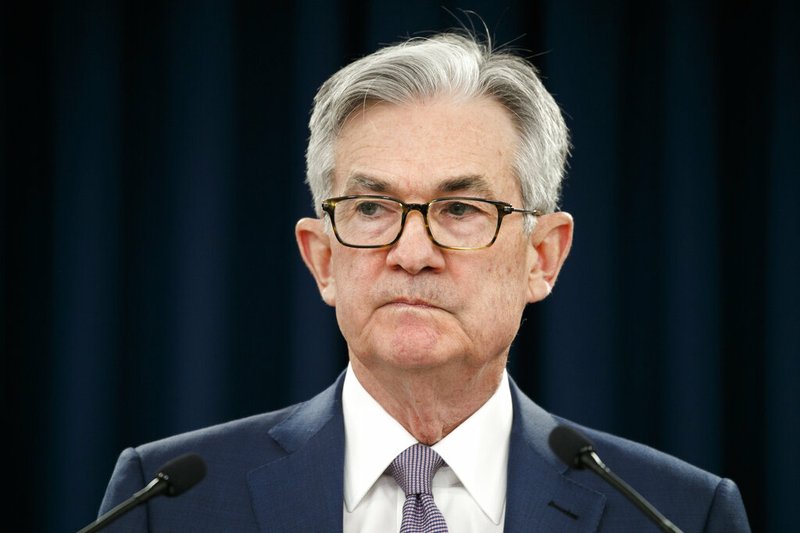 WASHINGTON -- The Federal Reserve said Wednesday that it would leave interest rates near zero for the foreseeable future as the central bank projected high unemployment for several years and a long slog back from the pandemic-induced recession.

In their first economic projections this year, Fed officials indicated that they expect the unemployment rate to end 2020 at 9.3% and remain elevated for some time, coming in at 5.5% in 2022. That would be well above the level they expect to prevail over the longer run in a healthy economy and far above the historically low jobless rates that preceded the virus.

"Many millions have lost their jobs," Fed Chairman Jerome Powell said at a news conference after the Fed's two-day policy meeting, adding the extent of the downturn and pace of the recovery remain "extraordinarily uncertain."

Powell said the Fed will do "whatever we can, and for as long as it takes" to support the recovery and "limit lasting damage" to the economy.

That includes keeping rates near rock-bottom for the foreseeable future, Powell said, noting there would likely be no rate increase through at least 2022.

At the same time, the Fed said it will keep buying about $120 billion in Treasury and mortgage bonds each month to hold low longer-term borrowing rates to try to spur spending and growth.

[Video not showing up above? Click here to watch » https://www.youtube.com/watch?v=vZjHHas9F64]

"It is clear that the Fed does not anticipate a V-shaped economic recovery and is positioned to move forcefully to support the economy," said Joe Brusuelas, chief economist at RSM, referring to an economy that snaps back as quickly as it shrank.

The Fed is projecting a particularly sharp economic hit this year, with officials expecting economic output to contract by 6.5% at the end of this year compared with the final quarter of 2019, before rebounding by 5% in 2021.

The new forecasts predict a far slower path back to economic strength than the Trump administration -- and perhaps the stock market -- seems to expect as the economy climbs out of a virus-spurred downturn. The Fed skipped its quarterly economic summary in March as the pandemic gripped the United States, sowing uncertainty as business activity came to a near standstill.

"The ongoing public health crisis will weigh heavily on economic activity, employment and inflation in the near term, and poses considerable risks to the economic outlook over the medium term," the Fed said in the post-meeting statement that accompanied the data outlook.

The last time the Fed released projections was in December, when officials expected 2020 unemployment to close out at 3.5% with 1.9% inflation and 2% growth.

The coronavirus upended that outlook. Unemployment rocketed to 14.7% in April before easing to 13.3% in May, according to the Department of Labor. Economic activity dropped so sharply as states issued stay-at-home orders in March and April that the National Bureau of Economic Research announced this week that the United States entered a recession after the economy peaked in February.

The central bank's release came hours after the Organization for Economic Cooperation and Development put out a report warning that the world economy faces the most severe downturn in a century and could experience a halting rebound.

"Extraordinary policies will be needed to walk the tightrope towards recovery," said Laurence Boone, the organization's chief economist.

The Fed's caution and the Organization for Economic Cooperation and Development's pessimism contrasts with the more optimistic tone Treasury Secretary Steven Mnuchin took while testifying before senators on Wednesday. He said in prepared remarks that the economy was "well-positioned for a strong, phased reopening of our country," though he noted during the testimony itself that some sectors had sustained "significant damage."

And those messages are very different from the one coming from President Donald Trump, who has been celebrating as stock indexes rally. "Nasdaq hits all-time high. Tremendous progress being made, way ahead of schedule. USA!" he wrote earlier Wednesday on Twitter.

Powell has emerged as a voice of economic caution since the pandemic took hold. He has warned that both monetary and fiscal policy must stand ready to do more to make sure the pandemic does not permanently scar the economy, and he has been clear that the Fed does not mistake its early successes in calming markets and reinvigorating lending as giving an all-clear signal.

"While the economic response has been both timely and appropriately large, it may not be the final chapter, given that the path ahead is both highly uncertain and subject to significant downside risk," Powell said May 13.

The central bank has taken extraordinary steps already to support the U.S. economy. The Fed cut interest rates to near zero in a series of back-to-back meetings in March. It has been snapping up government-backed bonds to keep markets functioning normally, and has rolled out a series of emergency credit programs aimed at ensuring that businesses and state and local governments can borrow money.

Information for this article was contributed by Jeanna Smialek of The New York Times and by Christopher Rugaber and Martin Crutsinger of The Associated Press.