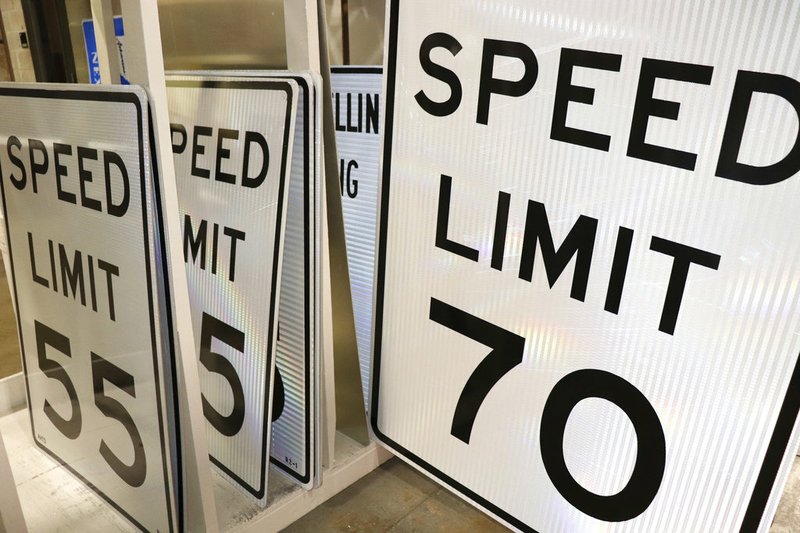 In this photo taken Aug. 1, 2017, a 70 mph speed limit sign sits near others in a storage area at an Arkansas Department of Transportation depot in Little Rock.

A reluctant Arkansas Highway Commission on Wednesday approved study recommendations paving the way to increase the speed on rural interstates to 75 mph as soon as next month.

The move also will boost the speed limits on some urban interstates and some rural four-lane highways to 65 mph. They are now set at 60 mph.

The study was mandated by Act 784 of 2019, which set the new speed limits, subject to support by an engineering and traffic safety investigation, which also said evidence showed fatal crashes would increase, at least initially, as a result of raising the speed limits.

The speed limits will remain 55 mph on other rural highways, based on the study recommendations that also left room for the commission to lower speed limits if additional studies justified it.

"This study looked across the state and used industry standards on how to set speed limits," Lorie Tudor, Transportation Department director, told the commission. "It's the first step. We are going to recommend to the commission that we continually monitor these roadways -- if you adopt the study today and the speed limits are raised -- we will put into place continual monitoring to make sure the routes stay safe for the motorists."

Some commissioners were leery of increasing the speed limits but were comforted somewhat about provisions in the law to roll them back where evidence warrants such moves.

"I think we all have some reservations and concerns for safety," said commissioner Alec Farmer of Jonesboro. "If you drive faster, you increase the risk of accident or injury. The key thing is the report justifies that speed limits can be raised, and we have the ability to continue to monitor it. If we do see spikes in accidents and fatalities on specific routes, we have the ability to go in and remedy that."

"Although I understand where we are today and why we are here, I am concerned about parts of the report, specifically the prediction we will have increased fatalities," he said. "I want everybody to understand that. That causes me concern, and I appreciate the director indicating we will be watching that. It's very important that we maintain some level of oversight. If we see areas of great concern ... we will be able to address that."

"What gets the headlines and the attention is raising the speed limit from 70 to 75," Taldo said. "I just think it's important to make that point if we move forward on this that it's not just the speed limit, but there's lots of other conditions that go along with it in the study itself."

Arkansas joins 18 other states that have interstate speeds of at least 75 mph. Six of those states have maximum speeds of 80 mph. One -- Texas -- has a maximum speed of 85 mph. That speed is limited to a 41-mile section of Texas 130 that opened in 2012, according to the Insurance Institute for Highway Safety.

The department's study cited a literature review that found that increasing speed limits also increased the fatality risk in crashes.

According to a 2016 study by the institute, for example, "a 5 mph increase in the maximum state speed limit was associated with an 8 percent increase in fatality rates on Interstates and freeways and a 4 percent increase on other roads," the department study said. "This increase in risk has been so great that it has now largely offset the beneficial effects of some other traffic safety strategies."

But a review of crashes from 1994 to 2015 shows a "declining trend for fatal and serious injury crash rates since 2000, even given the steady increase in the vehicle miles traveled over this period," according to the department study. "It could be argued that technology has played a more significant role in the fluctuation of the rates than the posted speed limit.

"For example, continued improvements in vehicle safety design, airbags, better tires, and the more recent development of collision avoidance systems, have contributed to the declines, whereas the significant rise in the use of smartphones and texting has contributed to the increase."

Another department study from 1996 forecast a "short-term increase in fatal crash and fatality rates." But it also "correctly predicted" that those rates would fall over time to rates lower than before the speed limits were raised.

"It is logical to assume that this same trend would apply if the decision to increase speed limits is once again made," the study said.

The study found that the increased speeds on selected sections of interstates and other highways were feasible based on the Federal Highway Administration standard of 85th percentile speeds used to select speed limits.

The 85th percentile is the speed at which 85% of motorists are at or below and which the federal agency has found is "one of the best indicators of a safe and reasonable speed."

The Insurance Institute for Highway Safety takes exception to the 85th percentile standard.

The state Transportation Department study found that the 85th percentile speed on rural interstates was 71 mph in 2016. The average speed was 52 mph.

The 85th percentile speed on urban interstates was 59 mph. On rural multilane highways, it was 67 mph, according to the study.

The different 85th percentile speeds found on rural two-lane highways made it too difficult to establish a uniform higher speed, according to the study, which looked at such routes in two department districts.

Tudor assured the commission that the department would monitor crash and fatality rates on the sections of the interstates and rural multilane highways on which speed limits were raised. 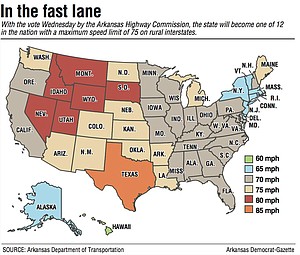 A map showing the maximum speed limits in each state.
ADVERTISEMENT