This image released by IFC Films shows Rob Brydon, right, and Steve Coogan in a scene from "The Trip to Greece." (Andy Hall/IFC Films via AP)

Believe it or not, a lot of new films have been released since movie theaters were shuttered by the covid-19 pandemic -- and a lot of good films.

They have arrived by streaming service, cable television, on-demand, drive-in and even Instagram. But the movies have kept coming. Here are 10 favorites of AP Film Writers Jake Coyle and Lindsey Bahr:

• Driveways: A gracefully understated film about about next-door neighbors -- one an 8-year-old boy (Lucas Jaye), the other a retired Korean veteran (Brian Dennehy, in one of his last performances) -- who become unlikely friends, Andrew Ahn's exquisitely gentle little movie has felt blessedly nourishing this spring. The tale might be sentimental, but Ahn's touch is true, and the performances of the three leads (including Hong Chau, as the boy's mother) are all tenderly human. The beautiful final shot is achingly sweet. (Available for digital rental.) -- Coyle

• Never Rarely Sometimes Always: Eliza Hittman's film will break your heart, and you'll be glad it did. This quiet, sharp and deeply felt drama about a teenage girl in rural Pennsylvania who must travel to New York to get an abortion is the kind of film that burrows deep into your being and stays with you long after. Newcomers Sidney Flanigan and Talia Ryder capture the unease of simply existing in their teenage girl bodies when the world sees them only as objects to be possessed and controlled. (Available for digital rental) -- Bahr

• New York, New York: Spike Lee has an ambitious Vietnam War veteran film, Da 5 Bloods, coming to Netflix, but he's already made possibly the most indelible and moving film of the pandemic. Set to Frank Sinatra, the three-minute short film simply and straightforwardly captures lockdown in Lee's home city. A galvanizing tribute to New York when it needed it most. -- Coyle

• The Half of It: This Netflix sleeper is smarter than your average Cyrano-inspired high school dramedy. From writer-director Alice Wu (Saving Face) in her first film in 15 years, the film follows a whip-smart Chinese-American student Ellie (played by the wonderful Leah Lewis) who reluctantly helps a romantically challenged football player woo the beautiful and soulful Aster (the girl of both of their dreams). It's an original gem that didn't get half the buzz it would have had the Tribeca Film Festival not been canceled because of the pandemic. -- Bahr

• The Vast of Night: Andrew Patterson's stunning directorial debut (streaming on Amazon) is a low-budget sci-fi thriller set in a small town in 1950s New Mexico. With sound and shadow it summons a fully realized vision of mid-century paranoia with more contemporary filmmaking flare, including a memorable long-take prowl through town. Rarely do new directorial talents announce themselves this clearly. -- Coyle

• How to Build a Girl: A portrait of a writer as a young, talented and messy woman, How to Build a Girl, based on Caitlin Moran's semi-autobiographical novel, is the fanciful, empowering and funny opposite side of the Never Rarely Sometimes Always coin, in which a teenage girl (a delightful Beanie Feldstein) from a downtrodden U.K. town invents a larger-than-life persona to help get a foot in the door in the male-dominated world of music writing. (Available for digital rental) -- Bahr

• Crip Camp: A Disability Revolution: The decades-long struggle for the equity of people with disabilities is the central and most important part of Nicole Newnham and Jim LeBrecht's Netflix documentary. But for a film that tells a vital and under-told history, it's also uncommonly loving, celebratory and spirited. In Crip Camp we see a social movement fueled by the passion of remarkable individuals. -- Coyle

• The Trip to Greece: There is a poignant melancholy to this film It's partly because it might just be the last time Steve Coogan and Rob Brydon take their semi-fictionalized versions of themselves out for an impression-soaked spin around a picturesque locale. But it's also a beautiful reminder of everything that we're missing, and the little and big luxuries that we can't even afford to dream about right now: Travel, food, wine, friends. (Available for digital rental.) -- Bahr

• Bad Education: This true-life suburban crime drama, which premiered last fall at the Toronto International Film Festival, might very well have been destined for Oscar buzz. Instead, it went straight to HBO and very likely the Emmys, should they happen. In Cory Finley's film, a Long Island school district becomes enmeshed in an embezzlement scandal that has its prim superintendent (Hugh Jackman) and assistant superintendent (Allison Janney) fighting for their jobs. Jackman and Janney, both, make grand bamboozlers. -- Coyle

• Shirley: Josephine Decker's prickly, unnerving film, about the reclusive author Shirley Jackson, is set a '50s Vermont college town but also takes place in the gothic realm of one of Jackson's own stories. Decker's fourth film, executive produced by Martin Scorsese, has a knack for making perspective a plaything and blurring the lines between art and reality. In Shirley (available for digital rental), the filmmaking craft is nearly as good as Elisabeth Moss' ferocious performance as Jackson. -- Coyle

This image released by Amazon Studios shows Jake Horowitz and Sierra McCormick, right, in a scene from "The Vast of Night." The film is currently streaming on Amazon Prime. (Amazon Studios via AP) 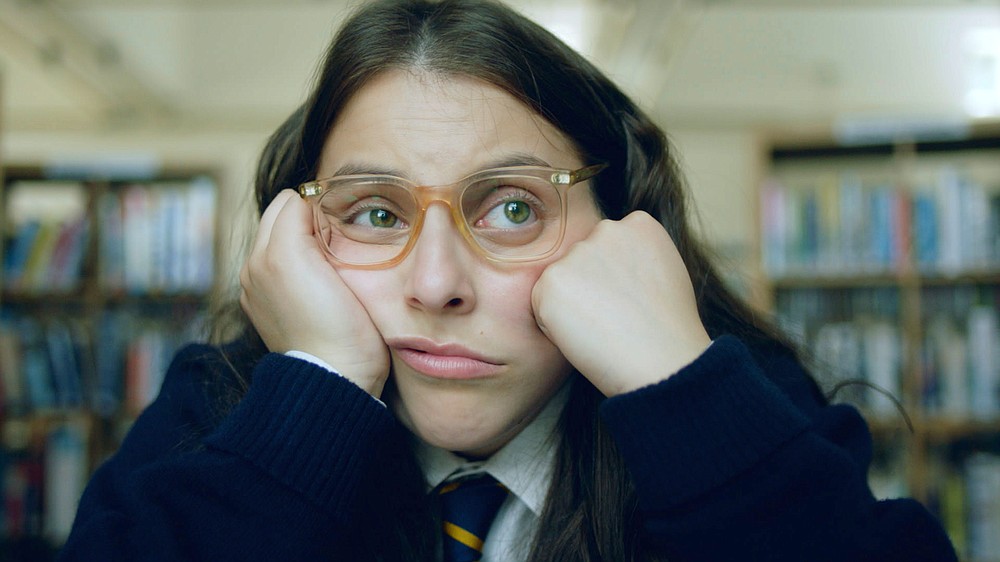 This image released by IFC Films shows Beanie Feldstein in a scene from the comedy "How to Build a Girl." (IFC Films via AP) 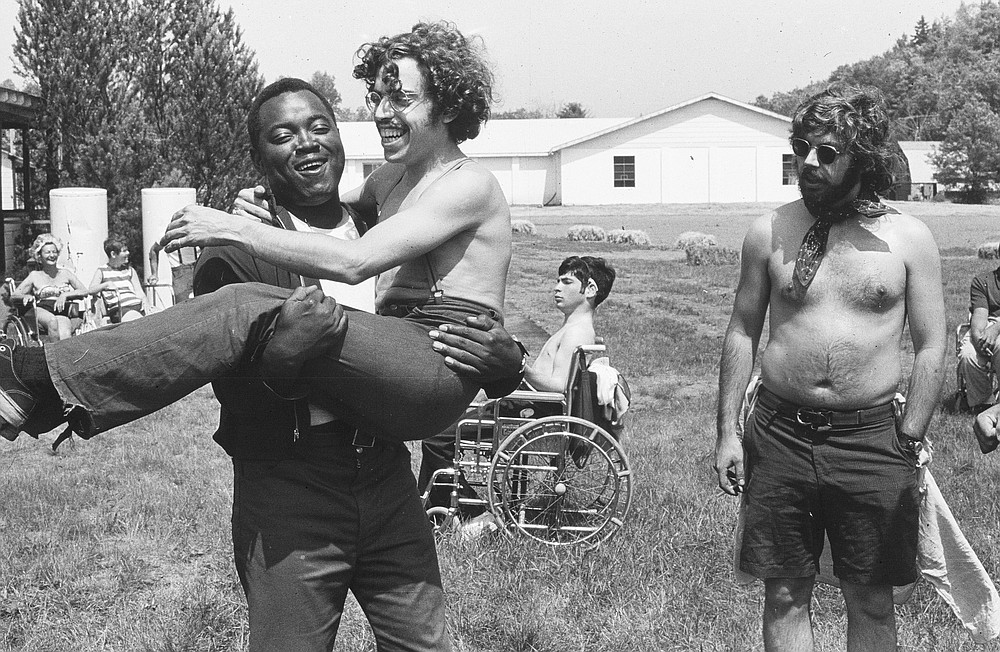 This image released by Netflix shows a scene from "Crip Camp: A Disability Revolution." The documentary is available for streaming on Netflix. (Steve Honisgbaum/Netflix via AP)

This image released by HBO shows Hugh Jackman, left, and Ray Romano in a scene from "Bad Education." (HBO via AP) 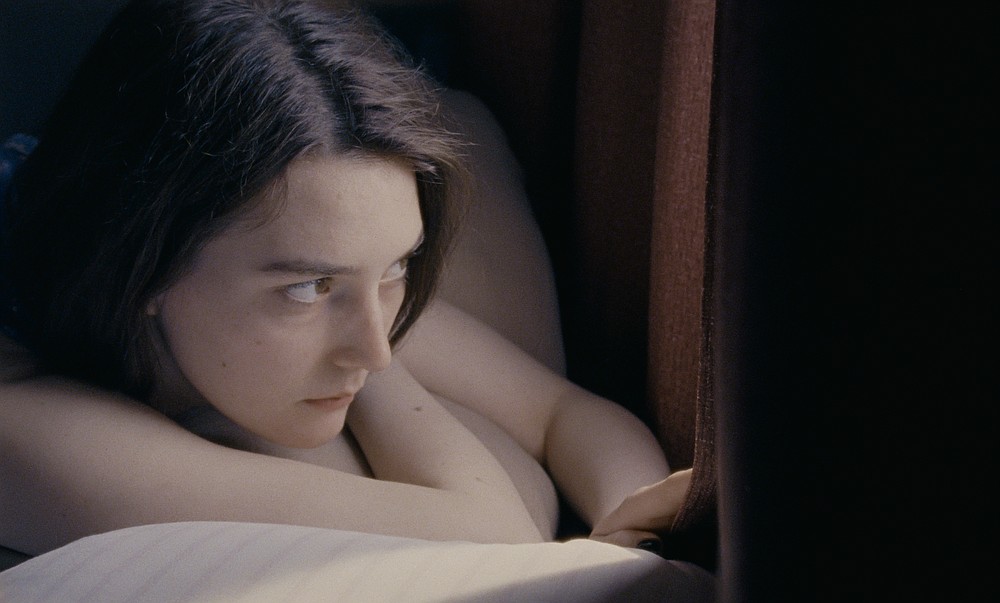