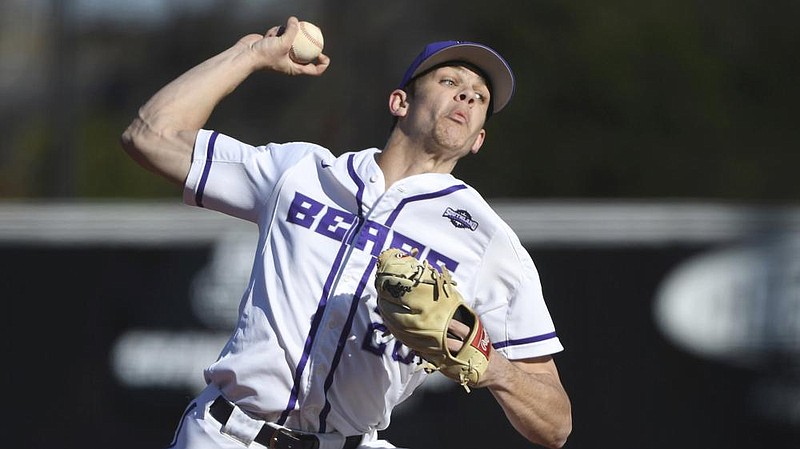 University of Central Arkansas right-handed pitcher Gavin Stone was drafted No. 159 overall in the fi fth round by the Los Angeles Dodgers on Thursday. (AP/Michael Woods)

It took until the second-to-last pick in a shortened draft, but University of Central Arkansas junior right-handed pitcher Gavin Stone found his major league home on Thursday night.

Stone was taken by the Los Angeles Dodgers in the fifth round with the 159th overall pick, the penultimate selection in this year's draft after it was trimmed from its normal 40 rounds to just five due to the effects of the coronavirus pandemic.

The approximate pick value for Stone was $327,200, according to MLB.com.

"It's a huge sigh of relief just because we've been waiting for three months, two months now, waiting on the draft, and for the season to get cut short, me not be able to go out there and get more stats, get more wins and prove myself a little bit better was hard," Stone told the Arkansas Democrat-Gazette late Thursday night. "These past two months have been stressful. That's an understatement. But draft day's here and it happens, so I'm super thankful."

As he watched the end of the draft Thursday night at his family's home in the Jonesboro area with some 20 family members and friends, Stone said he thought he was going to be selected a few picks before the 159th, and he admittedly was nervous as the five-round draft neared its end with 160 total selections.

Then, as the clock approached 10 p.m., the Dodgers finally called with good news.

Stone said the Dodgers were the first MLB team to have contact with him starting this past fall.

What intrigues him about the organization he's heading into?

It's the fourth year in a row that UCA has had at least one player taken in the MLB Draft.

Stone, 6-1, 175 pounds, made history during a shortened 2020 season when he pitched UCA's third no-hitter in program history. That came on March 6 in Conway in the Bears' 2-0 victory over Southeastern Louisiana. Stone tallied a career-high 13 strikeouts and had one walk. That performance helped him earn pitcher of the week honors in the Southland Conference.

Stone, a native of Lake City, was a two-time all state pick while playing at Riverside High School.