Dutch firm to buy Grubhub to expand into U.S. market 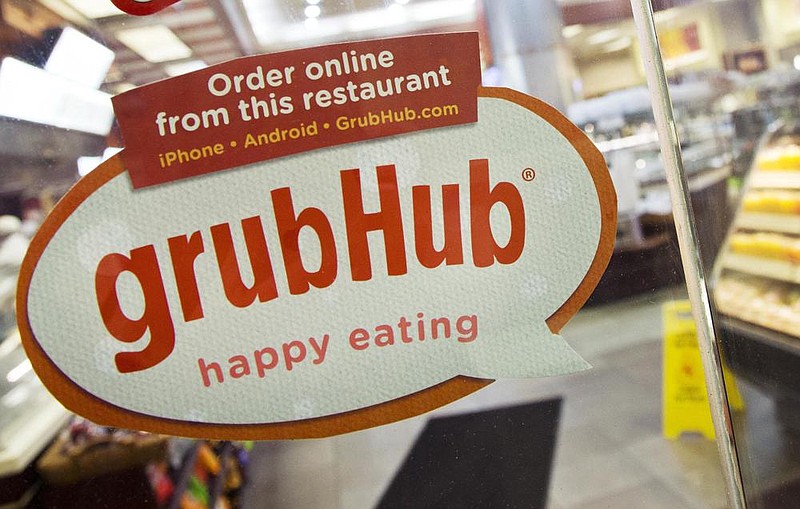 A sign with the old Grubhub logo is displayed on the door to a New York restaurant in this file photo. Just Eat Takeaway.com N.V. has agreed to acquire U.S.-based Grubhub Inc. in an all-stock deal. (AP)

Europe's Just Eat Takeaway N.V. has agreed to acquire Chicago-based Grubhub Inc. for $7.3 billion, in a deal that creates one of the world's largest meal-delivery companies as the coronavirus pandemic drives a surge in orders.

Amsterdam's Just Eat Takeaway said that it will pay $75.15 per share for Grubhub in an all-stock deal.

The deal sidelines Uber Technologies Inc., which had been in acquisition talks with Grubhub for months. Political pressure raised questions about whether U.S. regulators would approve such a deal. The two companies had nearly aligned on a price but remained at odds over other issues, including terms of a breakup fee for Grubhub if the deal couldn't be completed, people familiar with the matter said last month.

Grubhub will start up Just Eat Takeaway in the U.S. market, broadening the Dutch company's already-global reach that includes Australia, Brazil and Canada, in addition to its home base in Europe. Jitse Groen, the Dutch billionaire who created Just Eat Takeaway in 2000 in his university dorm room, has been looking to expand aggressively over the past year. Less than two months ago, Takeaway received antitrust clearance from the U.K. for its $8 billion acquisition of Just Eat.

Matt Maloney, Grubhub's chief executive officer, helped start the company in 2004. He met Groen a few years later, and they describe each other as kindred spirits. "We have the same company on different continents," Maloney said Wednesday. "There's this mutual cosmic alignment."

In 2013, Maloney led a merger of Grubhub and Seamless to create what was then a dominant food-delivery website. But the company has fallen far since then. DoorDash Inc., the current leader in the U.S., and Uber have eaten up market share, leaving Grubhub with 23% as of the end of April, according to market research firm Second Measure.

Food delivery was one of the few parts of the economy to benefit from the spread of the coronavirus this year, thanks to people spending more time at home. Grubhub's stock is up 39% since the World Health Organization declared a pandemic in March, though it's still trading at less than half its peak in 2018.

Profit margins are tight or nonexistent in food delivery because of stiff competition to sign the most popular restaurants and add customers. Gross food sales for Grubhub rose 8% to $1.6 billion in the first quarter, and the company reported a net loss of about $33 million. Uber's gross bookings for food delivery increased 52% to $4.68 billion in the same period, but the division's loss also rose.

Analysts have long said the unprofitable model in food delivery is unsustainable and expected consolidation. Grubhub's largest shareholder, Caledonia Investments, expressed support for the sale. "This was timed really well with Grubhub at a depressed price," said Will Vicars, co-chief investment officer at the Sydney-based firm, which also owns shares in the the Dutch firm. "It gives Just Eat Takeaway another important profit pool, and they have showed they can win against Uber in markets like Germany and the Netherlands."

For Uber, losing the deal is a blow to the company's plan to increase revenue and eventually turn a profit from food delivery. That strategy was especially urgent with the pandemic lifting food delivery while decimating Uber's main business of ride hailing. The company has cut jobs and side businesses as a result. It was relying on deals to achieve a top position in the markets where it operates.

In an emailed statement, a spokesman for Uber said the company believes the industry needs consolidation but that it's not interested in "doing any deal, at any price, with any player."

Just Eat Takeaway said Maloney will join the board and run the North America business. "Matt and I are the two remaining food delivery veterans in the sector, having started our respective businesses at the turn of the century, albeit on two different continents," Groen said in a statement. "Both of us have a firm belief that only businesses with high-quality and profitable growth will sustain in our sector."

Separately, Yum Brands Inc. on Thursday sued Grubhub over the cancellation of a five-year deal to deliver food from KFC and Taco Bell restaurants, saying the termination of the agreement will lead to customers having to pay more for food from those franchises.

Yum agreed to buy a $200 million stake in Grubhub in February 2018 as part of a partnership that included online ordering for pickup and delivery from KFC and Taco Bell in the U.S. But Grubhub suddenly declared the deal invalid in early June, citing interactions between Yum, Uber Eats and PostMates, according to the lawsuit, which was filed in state court in New York.

"Grubhub's improper efforts to rid itself of a deal it no longer wanted and to line its pockets will cause enormous harm to consumers at a time when they can least afford it," Yum said in the complaint. "Many consumers remain reluctant to leave home or to eat in restaurants in the midst of a global pandemic. Grubhub's brazen action will result in an increase of nearly 40% in the fees consumers pay."

Grubhub didn't immediately respond to an e-mail seeking comment on the suit.