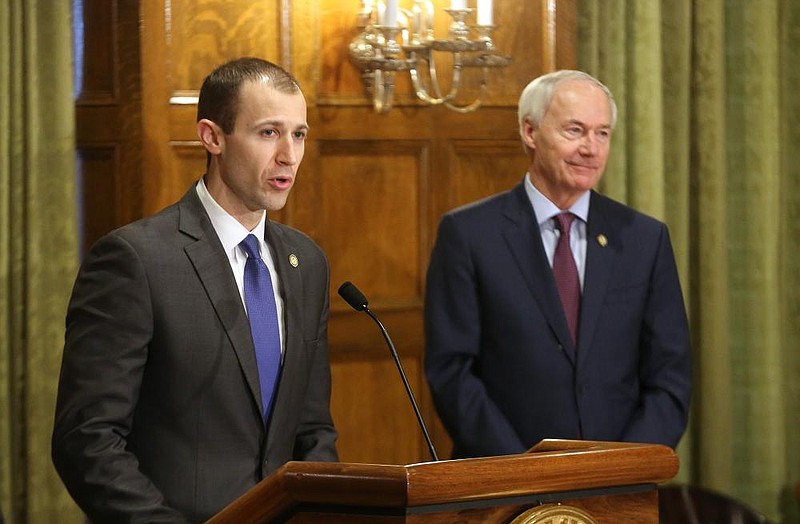 For the fifth-consecutive year, the executive director of the Arkansas Economic Development Commission received a performance-based bonus of more than $50,000 in private funds from an affiliated nonprofit foundation.

Preston also serves as secretary of the state Department of Commerce under the Republican governor's consolidation of 42 executive branch agencies into 15, effective last July 1.

Gus Vratsinas of Little Rock, the foundation chairman, said Thursday that Preston was paid a $54,000 bonus about a week ago and will be paid another $810 upon approval of the foundation's board next week.

In a letter dated Thursday to Vratsinas, Hutchinson said he conducted his annual performance review of Preston and recommended the "full bonus" of $54,810 based on Preston's current base salary of $182,700 in fiscal 2020.

Preston is eligible for a performance-based bonus of up to 30% of his base salary under a memorandum of understanding between the foundation and Preston, Hutchinson noted in his letter to Vratsinas.

The state pays $153,000 of Preston's annual salary and the foundation pays the rest of the base salary, according to state and foundation officials.

Preston's state-paid salary won't increase in fiscal 2021, which starts July 1, because the governor has delayed deciding whether to grant merit raises for executive branch employees until this fall.

"He does a stellar job," Vratsinas said of Preston on Thursday in an interview.

He said the fruits of Preston's labor include his work with the commission's team, the city of Little Rock, Pulaski County, Port of Little Rock and others to recruit an Amazon building project to the port.

Preston drew criticism this spring from state lawmakers over the premature rollout of the Arkansas Ready for Business program without legislative approval for spending authority for the grant program, and over the implementation of the Pandemic Unemployment Assistance program.

Last month, Preston also drew criticism from several lawmakers for not showing up to testify before two legislative committees to discuss the Pandemic Unemployment Assistance website, which has been under FBI investigation because applicants' information was accessible to outsiders.

But Hutchinson has said he directed Preston not to attend the meeting and that Preston would respond to questions from lawmakers at a subsequent meeting of the Legislative Council, which Preston did.

Preston told the council that "an ongoing grand jury subpoena" would not allow him to share information about a data security incident in the state's online portal for people seeking the unemployment assistance.

Asked Preston's bonus in light of these flaps, Hutchinson said Thursday in a written statement that "when Mike Preston was recruited to lead our economic development efforts in Arkansas I asked the Arkansas Economic Development Foundation to use foundation funds raised from the private sector to supplement the salary and a bonus each year.

"The bonus structure is part of the original package promised to bring Mike to Arkansas," the governor said. "The bonus does not include any taxpayer dollars or state funds.

"In terms of the justification for the bonus, it is included in the letter to the foundation which recites one of our best years in creating jobs."

In his letter Thursday, Hutchinson said the commission under Preston's leadership during the past year "won 191 competitive projects resulting in signed incentive agreements, which yielded 6,551 new jobs with a $25.53 proposed average hourly wage, and a capital investment of $1.3 billion.

"These competitive projects represent a new payroll in the state of $347,873,822 and yield a positive cost benefit analysis on the tax dollars spent," the governor wrote.

"Since 2015, the total number of competitive projects won is now over 486 bringing in more than $9.8 billion in new capital investment and 23,800 new jobs," Hutchinson said.

In March, Shandong Sun Paper dropped its plan to build a $1.8 billion paper plant in Clark County that was projected to add 350 employees and provide 3,000 additional jobs in supporting industries.

"The current situation related to the coronavirus outbreak and continued political friction and economic instability make it impossible for us to proceed with the project within the timelines set forth in the environmental permit," the company said. At that time, Preston said that "it's a big disappointment for everyone involved."

As part of what the governor described as a partial list of the accomplishments of the Arkansas Economic Development Commission under Preston's leadership during the last year, Hutchinson said Preston led three international business recruitment trips to Europe, Asia, including India, and the United Arab Emirates.

"Included in the integrations was a streamlined approach for shared services resulting in cost savings and efficiencies, identification and hiring of a Commerce Executive team within existing resources, and the development and implementation of a new unified vision and mission for the entire department," the governor wrote in his letter to Vratsinas.

In an echo of his previous letters to Vratsinas about Preston, Hutchinson wrote that "throughout Secretary Preston's tenure, I have been impressed with his professionalism, determination, focus, energy and character.

"He has poured himself into Arkansas and has gone the extra mile every day to assure that our state is an economic engine for growth and increased opportunities for Arkansans," he said.

Preston has been executive director of the Economic Development Commission since April 2015.

He previously was vice president of community affairs for Enterprise Florida Inc., a public-private partnership between business and government leaders.

Preston is one of the highest profile department heads under Hutchinson. He has been eligible for the bonus from the foundation after each year of employment with the commission.

A number of states, particularly in the South, maintain employment contracts with their state economic development directors that include additional private funds in the director's overall salary, state officials have said.

The Arkansas Economic Development Foundation helps the state be competitive in compensating the executive director, just like the Razorback Foundation has helped compensate coaches at the University of Arkansas, Fayetteville, Vratsinas has said.