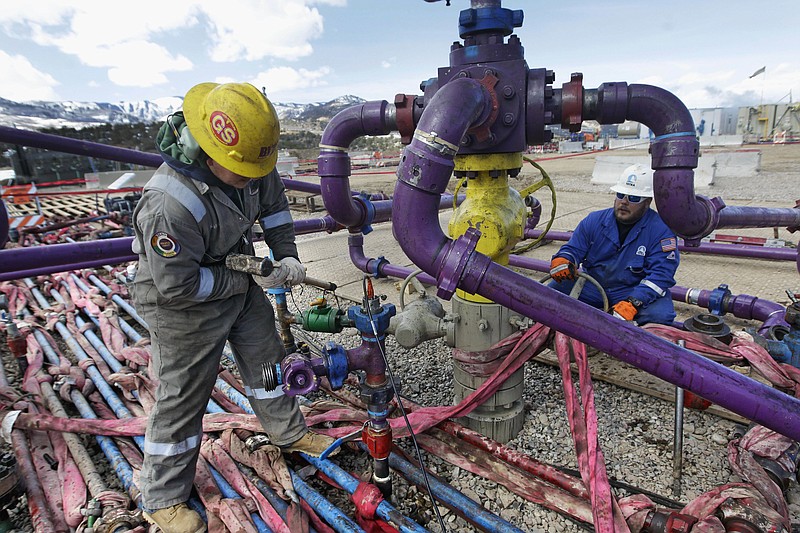 Workers tend to a well head during a hydraulic fracturing operation outside Rifle, western Colorado, in this March 29, 2013, file photo. (AP / Brennan Linsley )

BILLINGS, Mont. -- The Trump administration has awarded energy companies hundreds of breaks on payments for oil and gas extraction from U.S. lands and the Gulf of Mexico during the coronavirus pandemic, according to a government database and federal officials.

The temporary breaks on royalty and rental payments are intended to help companies with workforce problems or other issues after government-imposed shutdowns due to the pandemic caused fuel demand to plummet worldwide.

Critics argue the breaks on government fees are unnecessary industry handouts that in some cases are benefiting companies with histories of environmental violations or past failures to pay royalties.

Prices for oil have rebounded in recent weeks, topping $39 a barrel for West Texas crude on Wednesday after dropping below $13 in late April. Industry representatives say a full recovery is still far off.

The administration has now approved at least 117 applications for royalty reductions on U.S. lands in three Western states, according to Department of Interior data analyzed by The Associated Press.

In the Gulf of Mexico, five companies were deemed eligible for royalty relief and 12 applications from those companies have been granted, according to Karla Marshall with the Interior Department's Bureau of Safety and Environmental Enforcement. The agency refused to provide details on the sizes of the leases, when the breaks were granted and the names of the companies involved.

The AP reported in late May that the Trump administration had begun approving royalty relief requested by energy companies. The value of the breaks will depend on how much oil and gas the companies extract.

Companies typically pay the government 12.5% royalty payments on revenue from oil or gas extracted from public lands. The administration has cut that rate, in some cases to as low as 0.5%, on leases in Utah, Wyoming and Colorado.

Current crude prices and company operating costs are used to determine how much royalty rates should be reduced, said Chris Tollefson, a spokesman for Interior's Bureau of Land Management.

"Any applications we receive are reviewed by career experts in BLM's State Offices following long-standing procedures and its laws and regulations," Tollefson said, adding that the relief will be temporary.

Oil and gas royalty fees nationwide totaled almost $3 billion last year. Half the money is distributed back to the states where the oil and gas was extracted.

Among the companies receiving a royalty break was Fort Worth-based Finley Resources, on a 5,700-acre energy lease in Utah, according to government records. In fiscal 2014, federal officials responsible for enforcing royalty requirements collected $81,952 in penalties from the company for failing to submit production reports for multiple leases from 2010 to 2012.

The company did not immediately respond to a telephone message seeking comment.

Jayson O'Neill with the Western Values Project, an advocacy group critical of the administration, said the case showed Interior Department officials were allowing "royalty dodgers" to benefit from the relief program at the expense of local and state governments dependent on natural resource revenues.

"It seems to us, after oil quickly rebounded to nearly $40 a barrel, the oil corporations are taking advantage of an opportunity not to pay their fair share of the development of our natural resources," he said.

An American Petroleum Institute spokesman said the industry group has not been involved in the individual relief requests from companies.

"While energy markets appear to be stabilizing and demand continues to improve, full recovery from this global pandemic will not happen overnight and many industries remain impacted. We are no different, and challenges remain in the weeks and months ahead," said petroleum institute Vice President Lem Smith. 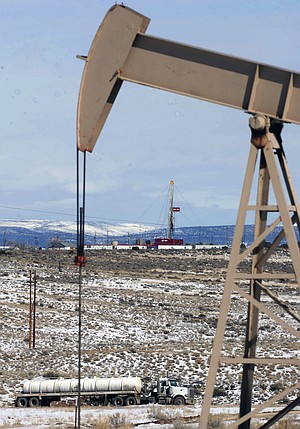 FILE - This Feb. 21, 2012, file photo, shows equipment in the oil fields of the Uintah Basin, southeast of Vernal, Utah. The Trump administration has started giving energy companies temporary breaks on royalties they must pay for oil and gas extracted from federal lands because of the coronavirus pandemic, government data shows. Royalty rate cuts so far have been authorized for at least 76 energy leases in Utah. (Trent Nelson/The Salt Lake Tribune via AP, File)
ADVERTISEMENT