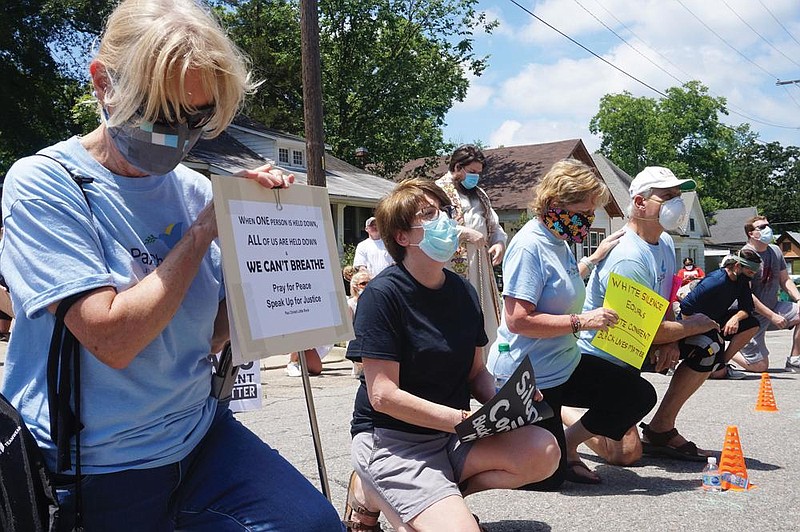 Area faith leaders and religious groups who have joined with members of the community for protests in response to the death of George Floyd say demonstrations are just the beginning of a longer road to police reform and the dismantling of systemic racism.

His death, recorded on cellphones and circulated on news outlets and social media platforms, has resulted in demonstrations -- peaceful and otherwise -- that have gained international attention as the United States sees its third consecutive weekend of activism today.

"When we saw this video of George Floyd, it was a clarion call to faith traditions to respond, because this was suffering that cannot be denied," said Malik Saafir, a philosophy professor at Philander Smith College in Little Rock.

Saafir, who is black, is an interfaith organizer and helped put together the Take a Knee rally held June 6. The rally began at the steps of Little Rock's Theressa Hoover United Methodist Church at the corner of 13th and Cedar streets and made its way toward the city's 12th Street station.

More than a dozen other groups, including the Indivisible Little Rock and Central Arkansas; the Islam-affiliated Interfaith Center; Baptist, Episcopal and Catholic entities.

"It's a sad time, but also [there's] lots of good opportunities to work toward a new future for our nation," said Sophia Said, executive director of the Interfaith Center and chairwoman of the Madina Institute. "We have to be the agents of change; we ourselves have to be the change that we want to see in the community."

Said noted that the Madina Institute helped organize the Take a Knee rally in support of the Black Lives Matter movement. Blacks comprise a portion of the Muslim community, with 20% of U.S. Muslims being black, according to a 2017 survey by Pew Research Center.

Dr. Sherry Simon, the founding director of the Catholic peace and social-justice organization Pax Christi, took part in that rally along with her husband, George. The two were among the white allies who knelt in front of the police station, which was in cooperation with the peaceful protest.

Their bodies acted as a symbolic layer of protection, she said, "in front of people of color"; and together the group chanted in reference to them, "Thank you for your service; please protect them."

"This change isn't going to come about peacefully unless we have white allies to push for the changes," Sherry Simon said.

"George Floyd was suffering, and it led to his death, and we don't want to see any other suffering happen to human beings on this scale, and in this way, without intervening, and without letting people know that our communities are here to support them as they grieve the loss of life ... to police brutality."

Baha'is Jennifer Reimer and her husband, Dan, took part in a peaceful interfaith event held at a commemorative garden in Little Rock. Representatives of Christian, Baha'i, Islam and Jewish faith communities were either present or spoke at the gathering. The four faith traditions, while differentiated by some beliefs, reflected the core tenet of oneness among all.

"All of them stood in solidarity as far as [being] against the [police] brutality, but also in solidarity for the unity of mankind, that we're all equal in God's eyes," Jennifer Reimer said.

"We try to bring people together," said Reimer, who is a board member of Interfaith Arkansas. "This prayer vigil that we had was to honor George Floyd and to bring the religious community to a space where we could work in unity toward ending the pain and ending this kind of aberrant behavior, but without protesting the police."

Part of addressing systemic racism for long-term change includes education, according to Said, and learning to address concerns such as implicit biases begins at home.

The institute has put together a series of workshops called "Race in Islam," the first of which was held June 6. The institute's advisory council, youth coordinators, teachers and other leaders from the mosque learn about race from a Muslim perspective from a black scholar born and raised Muslim in the United States.

Since the protests began, cities across the nation are reviewing police protocols and some have banned chokeholds. In Little Rock, Mayor Frank Scott Jr. and Police Chief Keith Humphrey announced Monday that, along with policy updates in the works in the Little Rock Police Department, an independent-review committee for the department has been organized.

For the Simons and others involved with Pax Christi, the recent protests are part of a larger effort that supports pro-life efforts that include quality of life "from the cradle to the grave" in conjunction with various "peace partners," George Simon said.

"We don't necessarily endorse every position that every other group that we network with takes, but we're always looking for that common ground where we can support one another and help heal all these divisions," he said.

The Muslim community will continue to join rallies and peaceful protests each weekend to show support for "our African-American brothers and sisters," Said noted, and the workshops for mosque leadership will continue.

Saafir said protests are only one form of advocacy in the community. Other efforts will include meetings with "stakeholders in criminal justice reform" in the state, to which Saafir and others will bring a faith-based perspective to the table. He and other interfaith groups are meeting to discuss the role of faith communities in future conversations on such reform, such as accountability and raising awareness.

Another facet of action in the works is having faith leaders present at rallies and protests, Saafir said, in a new initiative for Arkansas called Chaplains for Justice. The goal is to present a training program in the form of a webinar for clergy and lay church members to take part in during July to become a form of a first responder for people "who are in many ways sounding the alarm for injustices."

"We're here for the bigger conversation that needs to happen around criminal justice reform in Arkansas," Saafir said. 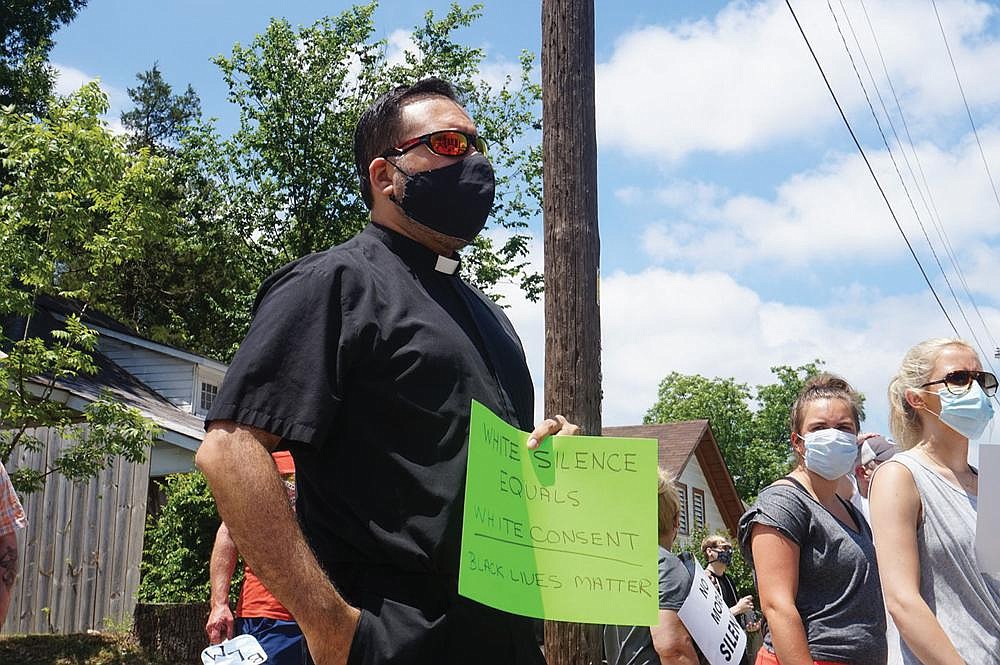 Father Rubén Quinteros, pastor of Immaculate Heart of Mary Church in North Little Rock (Marche), holds a sign at “Take a Knee — A Rally for Justice” on June 6 at Theressa Hoover United Methodist Church in Little Rock. (Special to the Democrat-Gazette/Aprille Hanson via Arkansas Catholic)
ADVERTISEMENT