Risk up on Arkansas poultry lines 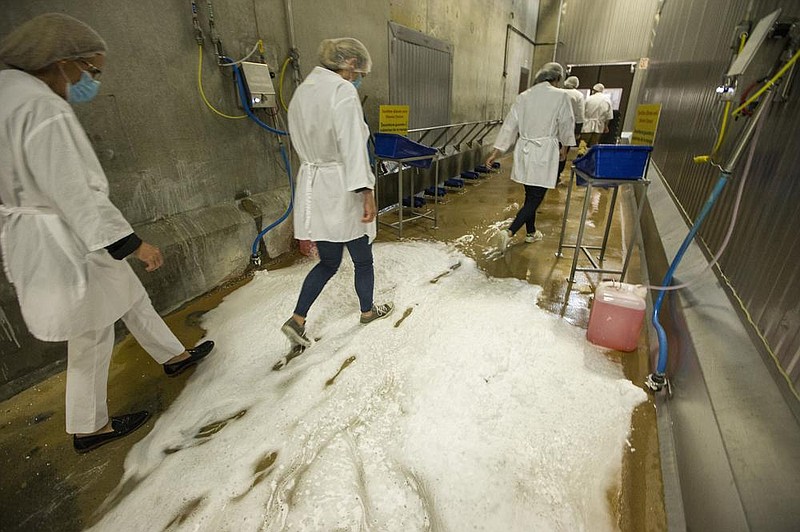 During a tour of the Tyson Foods Chick-N-Quick plant in Rogers on Tuesday, guests walk through disinfecting foam at the entrance to the “stack off” packaging area. Tyson says it has implemented measures to curb the rise in coronavirus cases at its plants in Benton and Washington counties. (NWA Democrat-Gazette/Ben Goff)

The number of poultry workers infected with the coronavirus is on the rise in Arkansas.

As cases climb, Tyson Foods and other chicken processors are testing or screening workers for symptoms. Meanwhile, workers on the production lines have health concerns and advocates for workers are planning protests.

There are 682 active cases among poultry workers and 671 workers have recovered from a coronavirus infection, according to a report Friday. Of the active cases, data shows more than 50% are in Hispanic workers and more than 70% are in Northwest Arkansas.

Tyson, the nation's largest meat and poultry processor, said it implemented precautionary measures to curb the rise of cases in the region by testing plant workers in Benton and Washington counties. Of the 1,102 workers at its Berry Street plant in Springdale, the company on Thursday reported 199 positive cases, one of which showed symptoms of a covid-19 infection. Another 48 cases at the plant also were identified by the Health Department.

"Think about where those 198 were the night before," Gov. Asa Hutchinson said in a briefing Friday. "This illustrates the importance that just because somebody might feel ill they'll stay home and they isolate themselves, but there's many out there I think you can say that are not showing any symptoms, they are not aware that they are positive and yet they are capable of spreading the virus."

The number of coronavirus cases in Arkansas rose a record 731 on Friday, raising the state's total to 11,547. Of the 524 community cases, a third of those were from Tyson's Berry Street plant, said Dr. Jose Romero, an infectious-disease specialist at Arkansas Children's hospital.

Advocates are worried that if no immediate action is taken at the poultry plants, the number of cases tied to the industry will worsen and reach the levels of other states. According to the Environmental Working Group, a corporate watchdog organization, about 18% of Iowa's cases, 20% of Nebraska's cases and 30% of South Dakota's cases stem from meatpacking plants.

More than 24,000 cases nationwide have been tied to the industry so far and at least 86 worker deaths, according to reporting by independent, nonprofit news source ProPublica. According to the Arkansas Division of Workforce Services, there were more than 32,908 people in the state working in the animal slaughtering and processing industry in 2019.

"It's not inevitable that it spread like it did," said Deborah Berkowitz, worker health and safety program director for the National Employment Law Project.

The meatpacking industry, where workers stand shoulder to shoulder doing repetitive jobs, did not implement basic federal guidance, she said.

"Why is it that this is the only industry that is allowed to sicken and kill workers with immunity?" said Berkowitz, a former chief of staff at the Occupational Safety and Health Administration during President Barack Obama's administration.

President Donald Trump signed an executive order on April 28 to encourage meatpacking plants to remain open throughout the pandemic. The order was handed down a day after Tyson Foods bought full-page advertisements in several newspapers, including the Arkansas Democrat-Gazette, that said the pandemic was breaking the food supply chain. Berkowitz said the order did not force plants to stay open and was bluster to intimidate local health officials and plant workers from suing.

Magaly Licolli, co-founder of Venceremos, a poultry plant worker advocacy group in Springdale, is calling on Hutchinson to temporarily shut down the plants.

"He doesn't act because he says he doesn't have the capacity to order that," Licolli said. "But he does. He ordered the shutdown of schools, he has the responsibility to shut them down."

Tyson and others have said they are in compliance with federal health guidance and implemented worker protections such as temperature screenings and plastic barriers on the production lines. Tyson spokesman Gary Mickelson said the company plans to test about 4,600 workers in Northwest Arkansas for the coronavirus as it steps up testing efforts. Workers who test positive receive paid leave during the quarantine period.

Despite these promises, Licolli said Ozark Mountain Poultry and others are not testing workers and are going about business as usual to keep profits up. The company's plant in Rogers reported 82 active cases on Friday. A spokesman with Ozark Mountain Poultry, owned by George's Inc., declined to comment.

"If we don't act immediately, the number" of cases will rise, Licolli said. What "we are seeing is really low compared to other plants in other states."

Licolli's organization led a protest in late May that drew demonstrators to four chicken plants owned by Tyson, George's and Cargill. Venceremos has another event planned for June 20 in response to the growing number of cases. 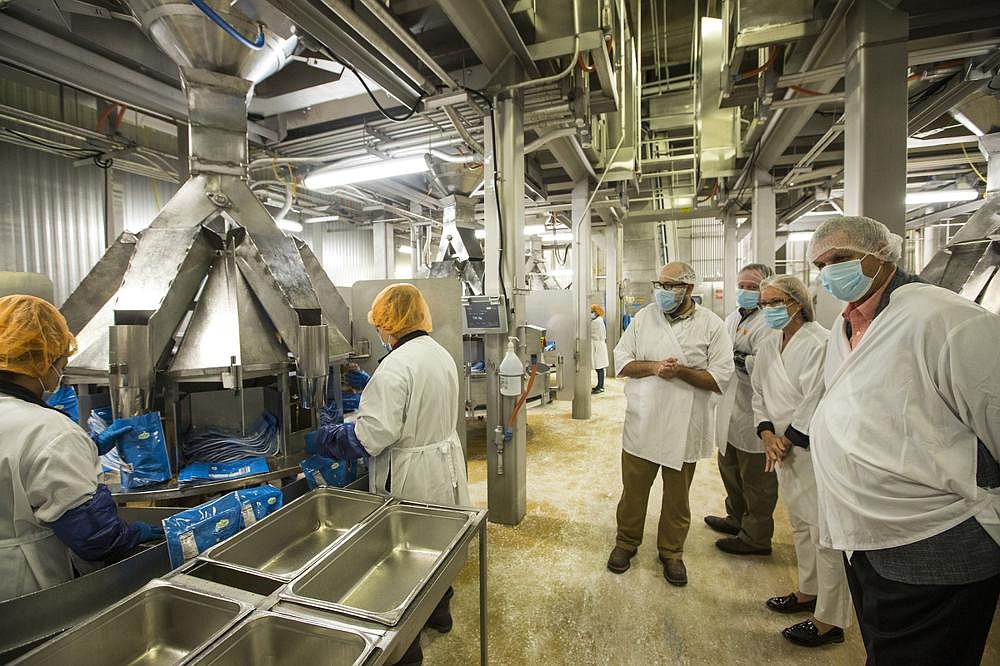 Visitors get a look at packaging work Tuesday during a tour of the Tyson plant in Rogers. (NWA Democrat-Gazette/Ben Goff)
ADVERTISEMENT