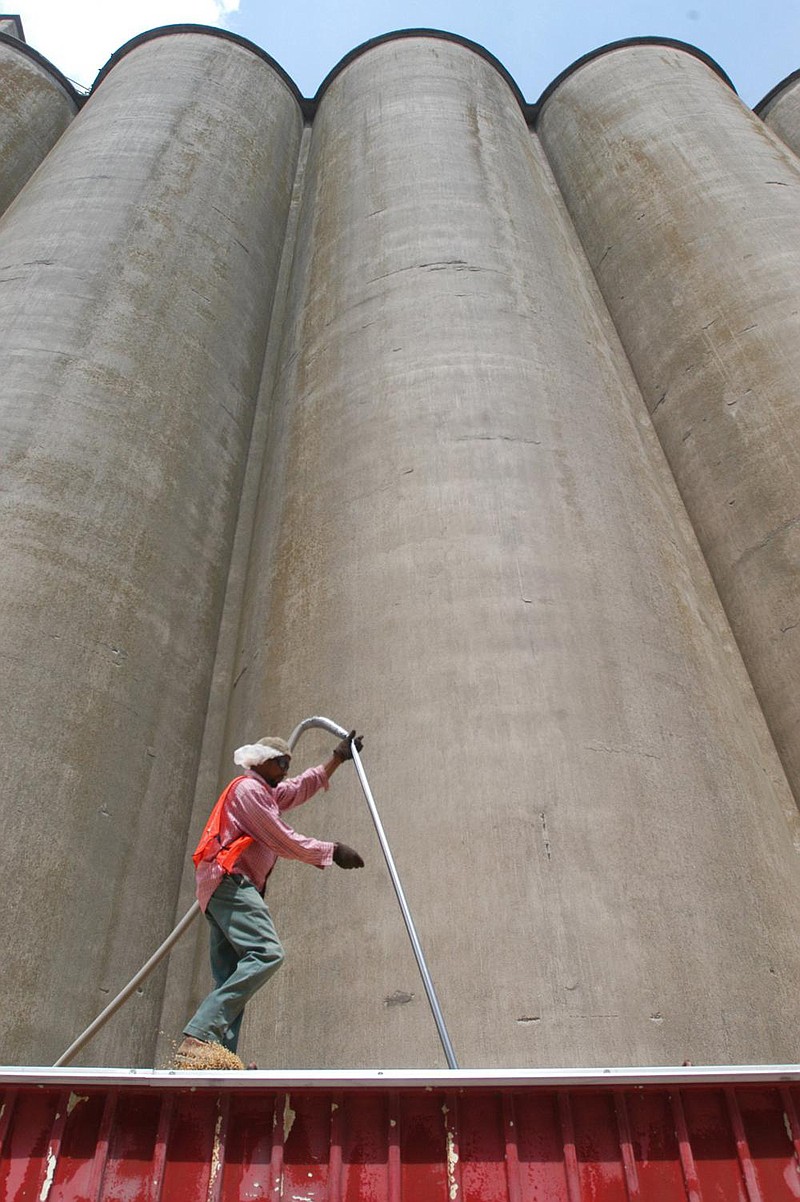 An employee with Producers Rice Mill walks atop a truckload of rice preparing to extract samples in this file photo at the mill in Stuttgart. A plan for a 20-megawatt solar farm to help power the facility in Stuttgart is set to be evaluated this summer by the Arkansas Public Service Commission. (Arkansas Democrat-Gazette )

State utility regulators this summer are to evaluate three proposed commercial solar farms, including one that stands to help shape the cost-shifting debate and test the need for grid charges imposed by electric utilities.

Those are two of the key issues that will be on trial as the Arkansas Public Service Commission evaluates a 20-megawatt solar farm that Producers Rice Mill wants to develop near its Stuttgart headquarters.

The $55 million private-capital investment will include battery storage and provide about 74% of the rice cooperative's electricity needs.

Producers submitted the proposal in April, emphasizing that the project would introduce "new, low-cost energy technology to broadly benefit one of the signature industries of the state of Arkansas."

The commission is to review two other large commercial solar initiatives this summer as well: at Bank OZK and Central Arkansas Water, both with headquarters in Little Rock.

All three of the solar projects would be developed by Scenic Hill Solar of North Little Rock, and are scheduled for public hearings and review by the three-member commission beginning in July.

Commission Chairman Ted Thomas notes that the Producers Rice Mill initiative "has the potential to be one of the most innovative solar projects in the nation."

Producers says it already has invested $7 million to supply resources and equipment for the solar plant, including purchasing land a mile east of the headquarters where the farm will be located.

"We want this to be a showcase for Arkansas agriculture," Producers Rice chief executive Keith Glover said. "This is an opportunity to show the world just how progressive we are in Arkansas."

The project includes 13.3 megawatts of battery-charged output, and the 2,000-member cooperative projects that it would save $100 million on electric bills over the 30-year life of the plant, according to filings at the commission.

Thomas notes that the project has the potential to clarify cost-shifting disputes, which is one of the most divisive issues in the solar debate.

"The projects adds storage that can be used at the time, or the day, when it is most valuable," the chairman said in an interview. "The extra value that provides to the grid could offset any cost shifts."

Cost shifts are driven by customers leaving the traditional electric grid and not having to pay for infrastructure and other fixed costs. Customers who solely rely on the utility's electric grid to power their homes and businesses then have to make up the difference -- compensating for the revenue lost when solar customers no longer pay for those embedded costs.

Utilities argue that when one customer leaves the grid, costs that the user was helping to pay for then shift to other customers.

With battery storage, the Producers facility would capture electricity that could be used by other ratepayers at a time when power is needed most.

For example, on mid-August days when temperatures soar above 100 degrees, electricity is in high demand and puts more stress on the grid than it would at midnight in March, when the air is cooler and customers have a lessened need for power.

On those steamy August afternoons, Producers would be feeding off the sun's power -- generating and storing electricity that can be shared across the system with other businesses and homeowners.

"Battery storage captures the actual value of the electricity provided and reduces the cost shift," Thomas said. "Storage provides power to other customers at the time when electricity is most valuable. That value doesn't go back to Producers -- it goes to the entire system to potentially bring that cost shift back to zero."

Thomas emphasizes that additional testimony and public hearings are on the panel's calendar this summer to fully evaluate the Stuttgart project.

"This is a project that could have tremendous potential to help without hurting anyone," Thomas said. "Now, that's as proposed, and we still have to go through a rigorous review process to make sure we get it right."

In filings at the Arkansas commission, Producers says no cost shift will occur, and instead the farm and battery storage will offer "quantifiable cost benefits to other ratepayers" and "introduces a new and unique public interest benefit."

That benefit, the company claims, is the generation and storage of more power than Producers will use, leaving excess capacity that can be returned to the electric grid and support other Entergy customers, particularly at peak demand times.

"The nub of it is the project will not only provide energy value but it also provides capacity value to the system," said Bill Halter, CEO of Scenic Hill Solar.

"By providing that maximum capacity to the grid there is value to every ratepayer, not just to Producers – every ratepayer," Halter said. "And that's the key value of solar."

Producers says its project is loaded with economic and environmental benefits for the entire state, and avoids harm or risk for ratepayers and the company's current power provider, Entergy Arkansas.

Entergy, the state's largest electricity provider, has not filed testimony in the docket though the company's director of regulatory affairs says "our position has not changed" on critical issues such as cost shifting and grid charges.

The utility insists that cost shifting does take place when solar customers leave the grid and that extra charges, or grid fees, should be imposed on those users to compensate for fixed costs picked up by other ratepayers.

"Excess generation may displace some energy costs, but it does not change the quantity of fixed costs for the grid that will continue to serve those [solar] customers," said David Palmer, who leads regulatory affairs at Entergy.

"In other words, all of the poles, wires, transformers, and other grid equipment used to serve Producers, or any other net-metering customer, will remain in service and require maintenance and eventual replacement," Palmer added. "A full 1:1 credit for net-metering customers shifts the costs of the grid to all other customers."

Net metering provides solar users with a credit for the power they return to the electric grid -- a credit equal to the cost Entergy charges to deliver power to its customers. The commission approved that 1:1 rate structure for net-metering customers in a June 1 order.

Along with cost shifting, Entergy notes the electric grid that serves all customers could be put at risk when solar facilities are not built on-site at the facility they serve. The Producers solar farm is 1 mile from the company's headquarters and mill.

"Grid reliability must take priority over any individual customer's decision to take advantage of a private service arrangement like net metering," Palmer said.

Along with potentially asking for a grid charge on the Producers facility, Entergy may seek what Palmer called a "remote generation charge." That fee would cover the cost to move energy from where it is generated to where it is used.

The company said it is reviewing the Producers' proposal and has not made a definitive decision on whether it will ask for added fees. Yet Palmer indicated that the utility probably will make the request since the commission's June 1 ruling also cleared the way for utilities to request grid fees on solar projects.

"In general, Entergy Arkansas does intend to file to implement a grid charge consistent with order No. 28 as well as a fee for customers who remotely establish their net-metering operations," Palmer said.

Additional fees -- depending on the price tag -- could alter Producers' plans to build the solar farm in Arkansas, the company said.

"Most likely that would change the economics of the plant," Glover said. "Depending on what that number is, it could very well kill the project. And it could definitely kill the project for Arkansas."

Producers would consider moving the solar farm to Greenville, Miss., to provide 100% of the rice mill's power needs at a plant there if state regulators add burdensome fees to the proposed Stuttgart development.

Either way, the company is committed to building the farm.