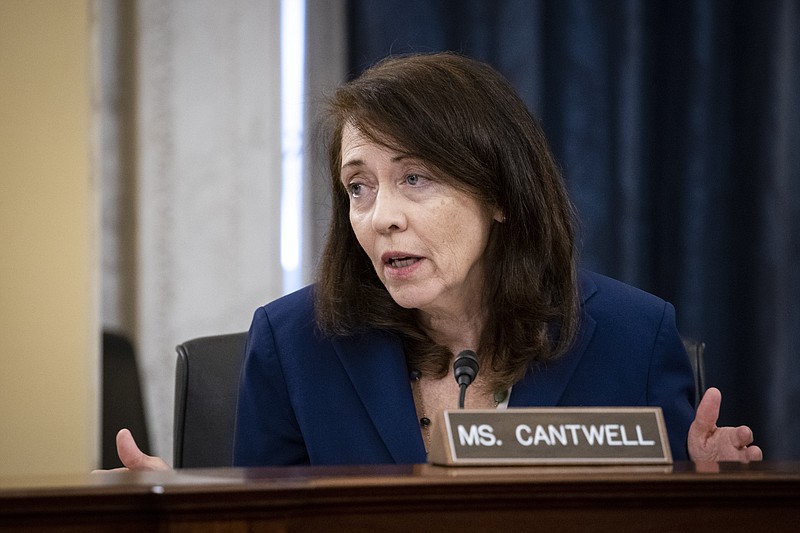 Sen. Maria Cantwell, D-Wash., speaks during a Senate Small Business and Entrepreneurship hearing to examine implementation of Title I of the CARES Act, Wednesday, June 10, 2020 on Capitol Hill in Washington. (Al Drago/Pool via AP)

WASHINGTON -- While the country copes with the coronavirus, an economic downturn and a reckoning over racism, lawmakers have reached bipartisan agreement on an election-year deal to double spending on a popular conservation program, and devote nearly $2 billion a year to improve and maintain national parks.

If approved by Congress and signed by President Donald Trump, the Great American Outdoors Act would be the most significant conservation legislation enacted in nearly half a century. The bill, set for a Senate vote this week, would spend about $2.8 billion per year on conservation, outdoor recreation and park maintenance.

"Americans have been spending a lot of time indoors" as a result of the pandemic, said Sen. Cory Gardner, R-Colo., one of the bill's chief sponsors. "They are ready to get into the great outdoors."

Gardner and Sen. Steven Daines, R-Mont., have pushed for the bill, first convincing Senate Majority Leader Mitch McConnell, R-Ky., that he should take it up, then convincing Trump at a White House visit.

McConnell told the two senators, who are both seeking reelection this year, that he would not consider the bill unless Trump was on board. Gardner and Daines are among the Senate's most vulnerable incumbents, and each represents a state where the outdoor economy and tourism at sites such as Rocky Mountain and Yellowstone national parks play a role.

At a meeting in the Roosevelt Room of the White House in late February, Gardner and Daines made their case.

"This is a legacy thing," Gardner told Trump, pointing to a portrait of Theodore Roosevelt that dominates the room.

"We wanted to make landmark legislation about our great landmarks," Gardner said in an interview.

The senators showed Trump pictures and maps of their states and stressed the importance of conservation in the West. Trump soon tweeted his support for the proposal. "It will be HISTORIC for our beautiful public lands,″ Trump said.

At a news conference to announce the deal, Daines and Gardner were joined by 10 other senators. That was in early March, days before the pandemic derailed Congress from most legislation not related to the virus.

It's three months later, and the bill is set for approval as early as Tuesday.

"America deserves a break right now, and the outdoors is restorative," said Sen. Maria Cantwell, D-Wash., a longtime advocate of the Land and Water Conservation Fund. In an interview, Cantwell credited a "new coalition" of lawmakers who support conservation and public lands.

Cantwell credited Sen. Richard Burr, R-N.C., for forcing attention on the conservation fund by blocking a 2018 spending bill that did not renew the program. It uses federal royalties from offshore oil and gas drilling to pay for conservation and public recreation projects. The program is authorized to collect $900 million a year but generally receives less than half that amount from Congress as lawmakers bicker over how the money should be spent.

Republican Sens. Rob Portman of Ohio and Lamar Alexander of Tennessee also pushed to renew it, along with nearly all Democrats.

While widely supported, the outdoors bill faces opposition, mainly from Sen. Bill Cassidy, R-La., and other Gulf Coast senators pushing to ensure it includes revenue-sharing for their states from offshore drilling.

Sen. Mike Lee, R-Utah, complained during debate that the bill was "written behind closed doors and is now being hermetically sealed, walled off from amendments" by Senate leaders. "Forget the theatrics in Seattle -- this bill is the real 'Capitol Hill Autonomous Zone,'" Lee said.

As written, the bill "enables the federal government to purchase new lands in perpetuity -- without accountability, oversight or any measures to make sure it can actually care for the land that it owns," Lee said. He noted that the federal government is already the largest land owner in Utah and many other states in the West.

The policy will "make life easier for politicians and bureaucrats, and harder for the Americans they ostensibly serve," Lee said.

Daines disputed that, saying Montanans and other Westerners treasure their public lands.

"We say in Montana that we get to work, but we also like to play," Daines said. "We work hard during the week ... so we can get out on the weekends, where there is hiking, fishing, hunting and backpacking. This is our life." 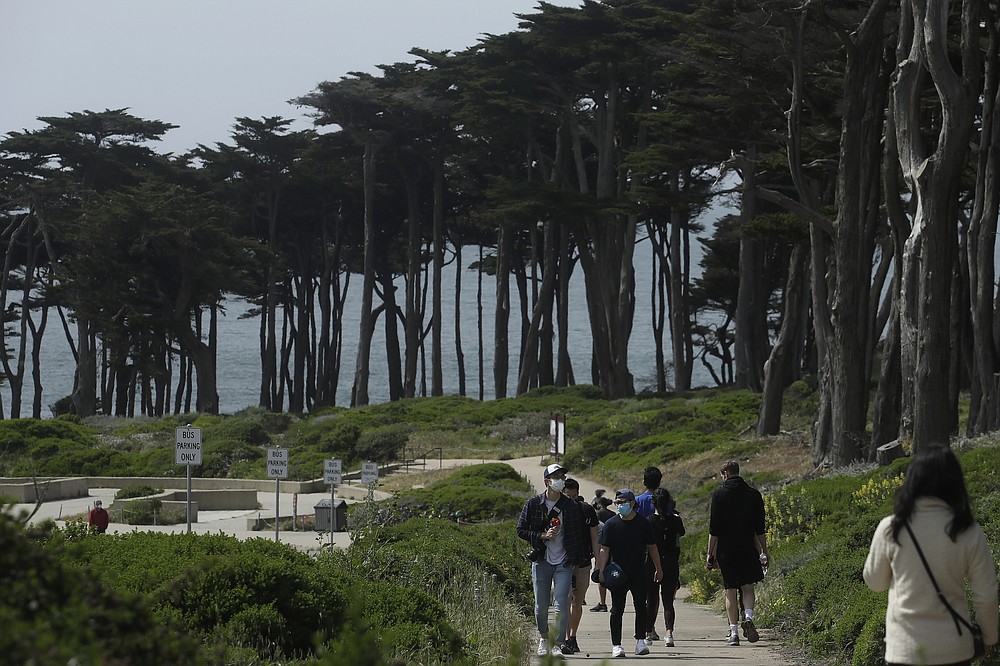 FILE - In this April 24, 2020, file photo people wear masks amid the coronavirus pandemic while walking on a path at Land's End in San Francisco. Lawmakers have reached bipartisan agreement on an election-year deal to double spending on a popular conservation program and devote nearly $2 billion a year to improve and maintain national parks. (AP Photo/Jeff Chiu, File) 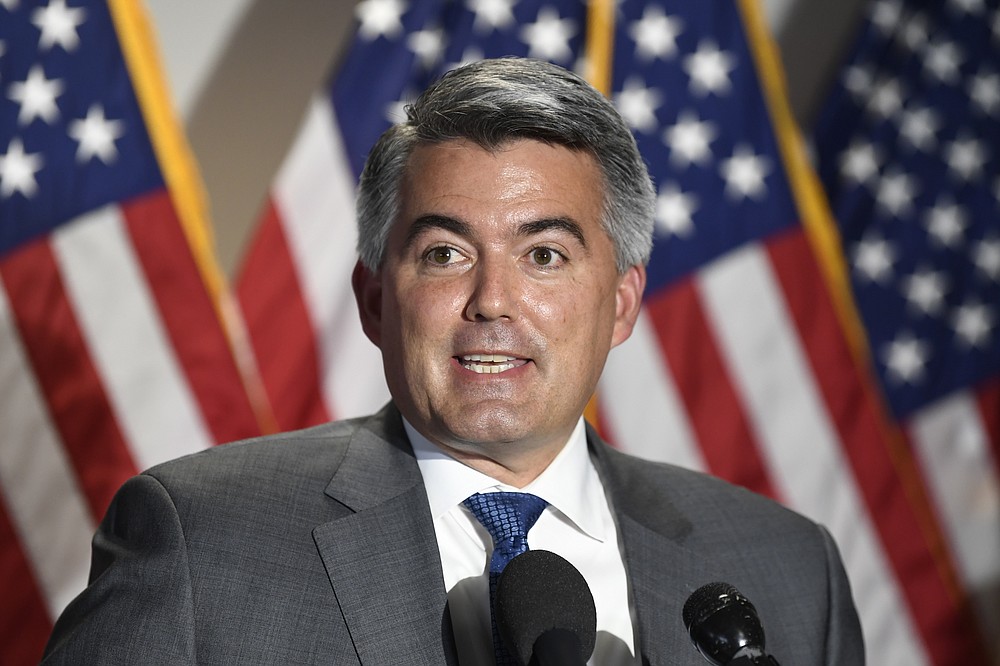 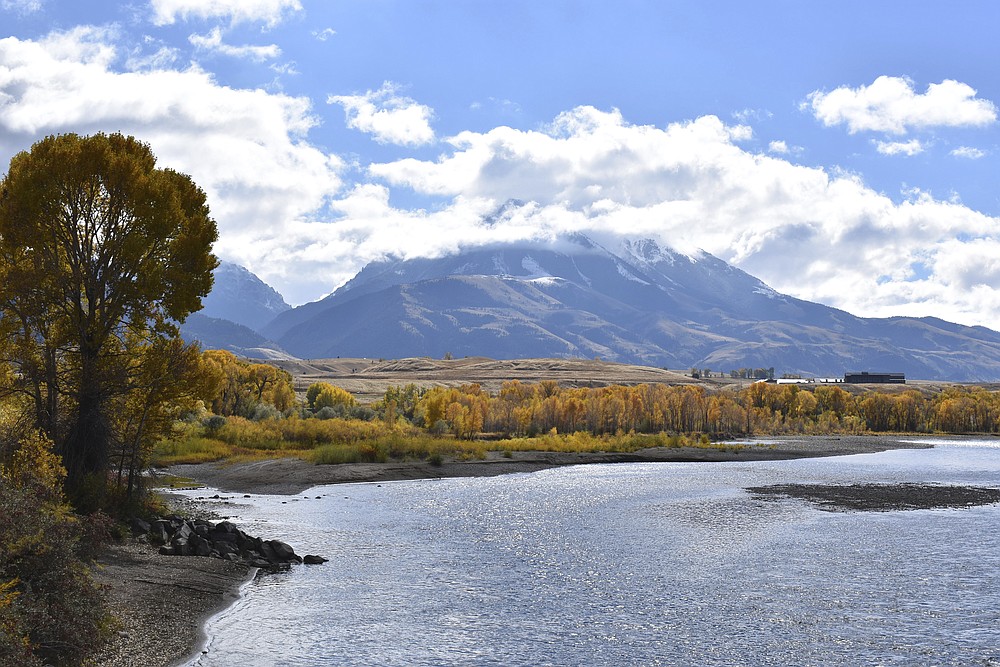 FILE - In this Oct. 8, 2018 file photo, emigrant Peak is seen rising above the Paradise Valley and the Yellowstone River near Emigrant, Mont. Lawmakers have reached bipartisan agreement on an election-year deal to double spending on a popular conservation program and devote nearly $2 billion a year to improve and maintain national parks. (AP Photo/Matthew Brown, File) 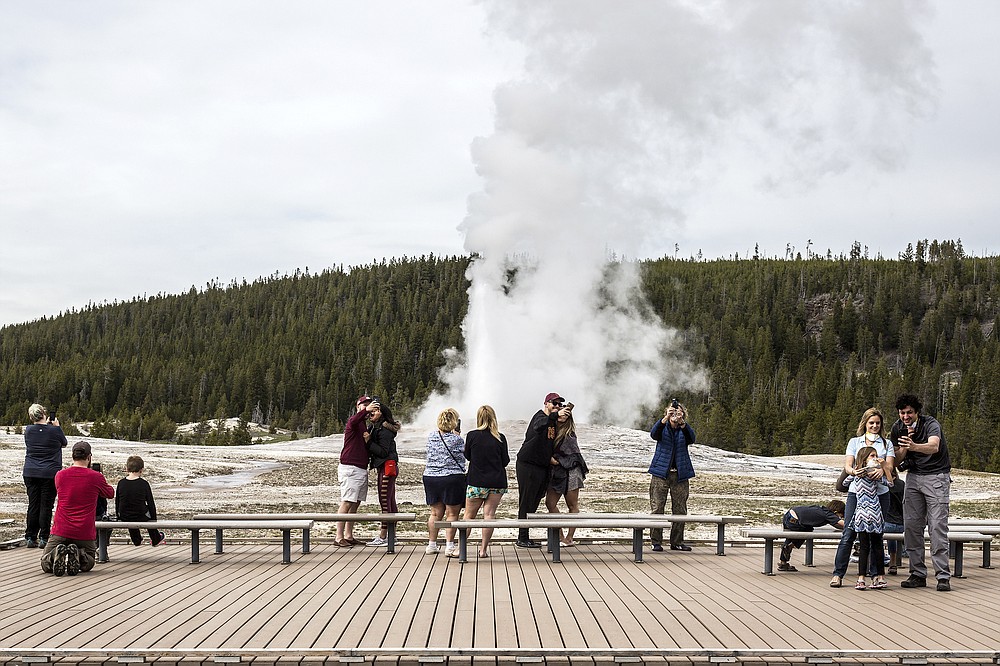 FILE - In this May 18, 2020 photo, visitors watch as Old Faithful erupts on the day the park partially reopened after a two-month shutdown due to the coronavirus pandemic, at Yellowstone National Park, Wyo. Lawmakers have reached bipartisan agreement on an election-year deal to double spending on a popular conservation program and devote nearly $2 billion a year to improve and maintain national parks. (Ryan Dorgan/Jackson Hole News & Guide via AP, File) 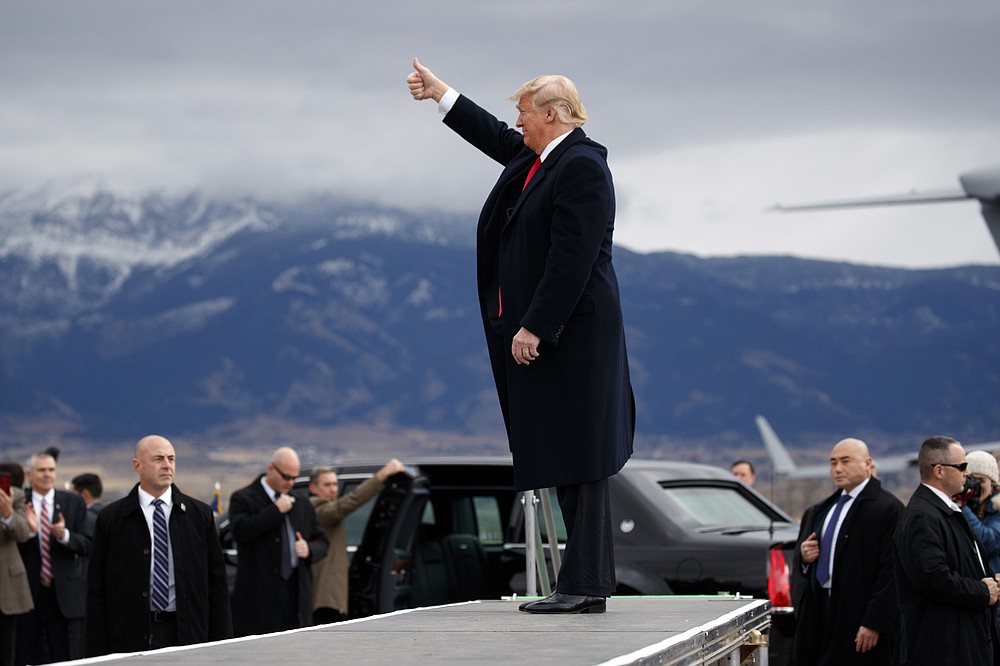 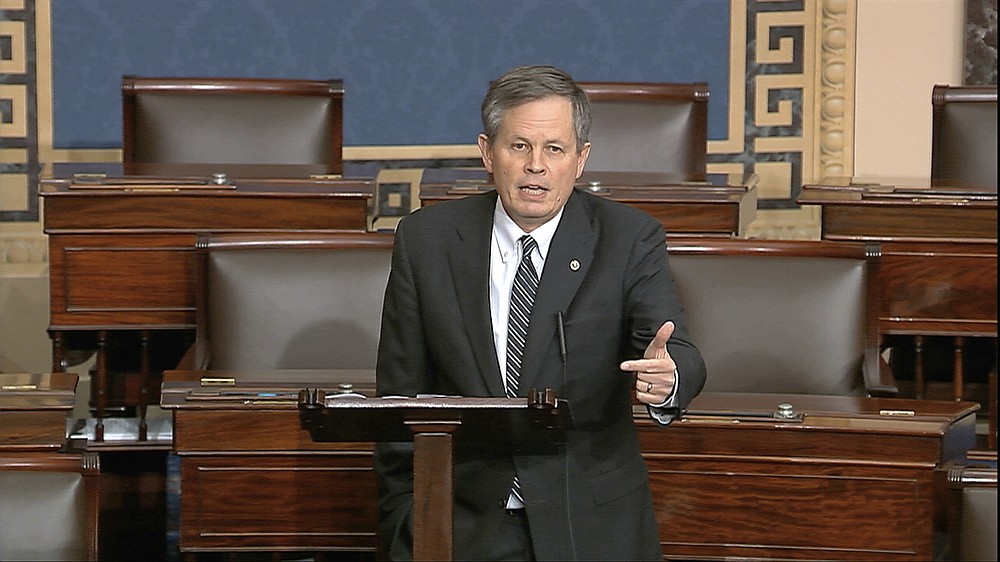 FILE - In this Tuesday, March 24, 2020 file image from video, Sen. Steve Daines, R-Mont., speaks on the Senate floor at the U.S. Capitol in Washington. Daines faces a challenge from Montana Gov. Steve Bullock in the Nov. 3 election. (Senate Television via AP,File) 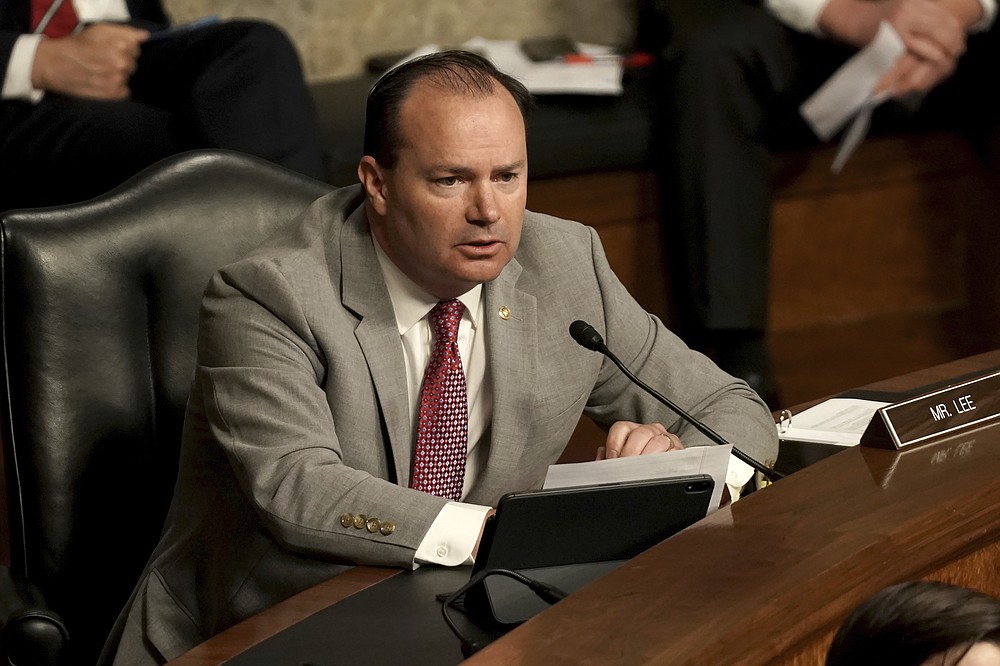