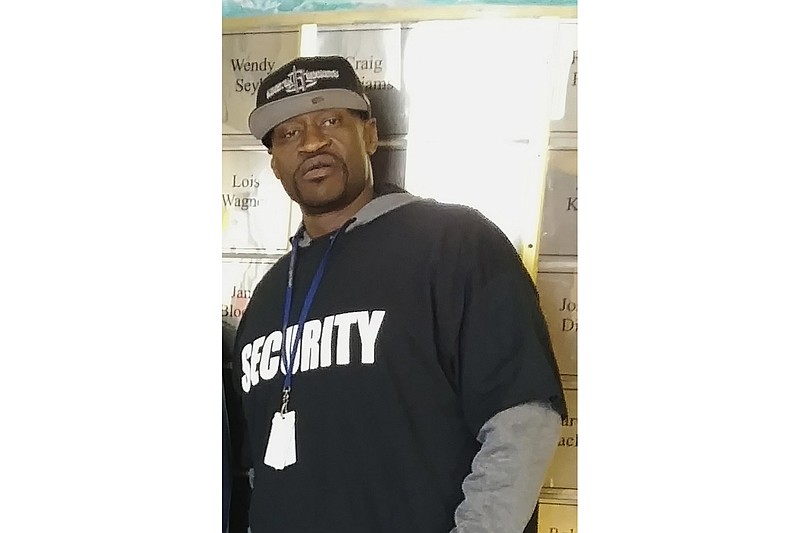 FILE - This undated file photo provided by Christopher Harris shows George Floyd. Video recorded by a bystander showed the world Floyd’s horrifying last minutes. But footage recorded by body cameras that officers wore as they were apprehending Floyd could show even more about what the officers were doing and saying during that fateful encounter. (Christopher Harris via AP, File)

MINNEAPOLIS -- Footage recorded by body cameras that officers wore on their chests as they were arresting George Floyd is expected to show even more about what the officers and Floyd were doing and saying during that fateful encounter.

"A video camera, when properly authenticated, is an eye witness. It can testify," said Michael Primeau, an audio and video forensics expert at Michigan-based Primeau Forensics.

Floyd, a black man who was handcuffed, died May 25 after Derek Chauvin, a white officer, used his knee to pin Floyd to the ground. Chauvin, who kept his knee on Floyd's neck even after Floyd stopped moving, has been charged with second-degree murder, third-degree murder and manslaughter.

The three other officers, Thomas Lane, J. Kueng and Tou Thao, have been charged with aiding and abetting both second-degree murder and manslaughter. All four officers were fired.

The widely seen video recorded by a bystander shows Chauvin's actions and Floyd's predicament. It also shows Thao, who was facing the bystanders.

Some surveillance videos that have been released show bits and pieces of what happened before Floyd ended up on the ground, but a complete video picture of what happened from start to finish hasn't emerged.

Body camera videos are not expected to be made public until a trial or until the cases are otherwise resolved.

Police spokesman John Elder said he was told that all four officers had their body cameras on, which is department policy.

Minneapolis police officers are required to activate their body cameras well before they arrive to a scene under rules put in place after the 2017 fatal shooting of Justine Ruszczyk Damond, an Australian native who called 911 to report hearing a possible sexual assault behind her home.

The two officers who responded to her call didn't activate their body cameras until after one of them shot her.

John Stiles, a spokesman for Attorney General Keith Ellison, the lead prosecutor in the case, said prosecutors are reviewing all available evidence. He said he couldn't comment further.

Mel Reeves, a longtime community activist in Minneapolis, said he doesn't think the body camera video will matter because the bystander video should be enough to convict the officers.

"We saw what we saw," Reeves said. "We don't need any more evidence. We saw a man murdered. ... If the system that we live under -- if this so-called democracy -- can't find a way to punish people that caused a human being's death, we will have to pack up our bags and try something else."

But body camera videos are expected to give a more complete picture, particularly in the cases of Kueng and Lane, whose actions are not seen in the bystander video because they are obscured by a squad car.

"From the one bystander video ... you see Chauvin, which is obviously very damning, but you don't see what the other two are doing, or hear what they are saying," said Mike Brandt, a Minneapolis-area defense attorney who is not involved in the case.

Lane's attorney, Earl Gray, said he has seen his client's body camera video and in his view, "it pretty much exonerates him." Without getting into detail about what it shows, Gray said the recorded audio and video is favorable to his client and reaffirms what is outlined in the criminal complaint: that Lane raised concern and suggested rolling Floyd onto his side.

Attorneys for Chauvin and Kueng said they weren't making statements or answering questions about the case. An attorney for Thao didn't respond to messages seeking comment.

According to the criminal complaints, the officers were arresting Floyd after a counterfeit $20 bill apparently was used at a store. At one point, they struggled to get him into a squad car, Chauvin pulled him out and Floyd "went to the ground face down and still handcuffed."

Brandt said body camera video will be key in showing what happened in the squad car.

Andrew Stroth, a Chicago civil-rights attorney, said video evidence, no matter the source, is critical in any case because it tells a story objectively and plays a role in getting officers charged in the first place.

"But for the [bystander] video, there's no way all those officers would've been charged that swiftly," Stroth said.

Primeau, the forensics experts, cautioned that video needs to be properly analyzed and sometimes supported by other evidence. For example, he said, additional information about the use of force on Floyd's neck is going to be imperative to determine whether Chauvin's act was deadly, and autopsy reports will need to back those claims up.

"Your moral perspective wants to say that" it was deadly, he said. "Your bias wants to say that ... but we don't know how much force was used ... there's no numerical value that pops up on the screen that says, 'That's 20 pounds of pressure on his neck for eight minutes and that's what it was [that killed him]."