Community leaders provide food to those in need 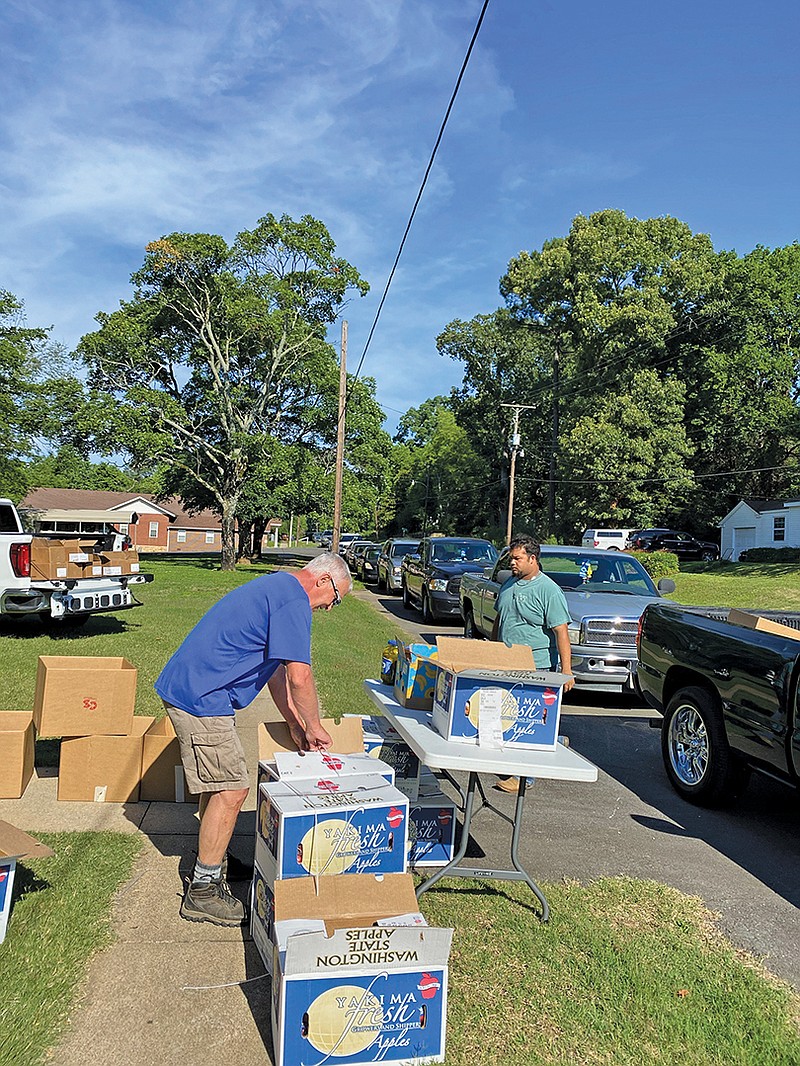 Dennis James, left, from Plummerville United Methodist Church and Ethan Black from Mount Carmel Missionary Baptist Church work together to hand out food donations during a recent drive-thru ministry at Plummerville UMC. Pastor Patti Butler of Plummerville UMC said that since the pantry began, volunteers have distributed more than 900 boxes of food items.

Over the course of the past few months, the community of Plumerville has come together to help provide food for those in need. Volunteers from local churches, including Mount Carmel Missionary Baptist Church, Plummerville United Methodist Church and Portland Missionary Baptist Church, as well as the South Conway County School District, helped pass out food at Plummerville UMC during a weekly drive-thru for the community.

“It started as a response to COVID-19,” said Patti Butler, a pastor at Plummerville UMC and Wesley United Methodist Church in Conway. “We understand that so many of the elderly could not go to the grocery store, and we needed a way to get food to them.

“We also realized the number of people who had their grandkids at home with them because people who still had jobs had no child care for their children.”

She said one woman had eight grandchildren at her house, as well as her daughter and son-in-law,

who had moved in with her.

“The Arkansas Food Bank has given us a delivery every week, and we have been able to purchase some food from the food bank,” Butler said. “We also received a grant from the Arkansas Community Foundation, but the food bank has been very generous.”

Since the drive-thru began, Butler said, organizers have seen an increase in the number of vehicles each week. For example, the first week, she said, there were about 80 cars, and last week, the group handed out about 170 boxes. She said the volunteers have distributed about 900 food boxes.

“It is going up quite significantly,” Butler said. “Plumerville is a food desert. There is a little country store and a Dollar General, but there is nowhere to get fresh food in Plumerville.

“We either have to go to Morrilton or Conway, and we are the only weekly food pantry.”

She said that every time the drive-thru is advertised with social media or on the radio, about an hour before the event started, there would be a line of cars two blocks long. Butler said the volunteers have offered deliveries, but mostly to homebound elderly residents. She said other people pick up food for their loved ones.

There is also a food box available at the Plumerville Police Department, 101 W. Church St., where the church has donated its extra nonperishable food.

She said one of the problems the volunteers have had is storing the perishable items. The South Conway School District allowed the group to use the district’s freezers and refrigerators because the volunteers didn’t have a place to store cold food. But now, they have switched the drive-thru from Mondays to Fridays, which is the same day they receive the food from the food bank, and that change has alleviated the food-storage problem.

“It really has been a community event,” Butler said. “It has very much been about us all working together.”

Patsy Johnson, who is a member of Plummerville UMC and serves on the Plumerville City Council, said she has had to turn away volunteers because so many have signed up to help with the drive-thru.

“One day, we served barbecue sandwiches, and another day, we served hot dogs,” Johnson said. “It has just been a blessing to everybody, and it has been great to see people’s faces light up.

“The food bank has just been great, doing this for us.”

She said it has felt really good to help others, including those who were furloughed or laid off during the pandemic. The food bank is committed to the drive-thru through June, but there is an option for July.

“The city has helped a lot as well,” Johnson said. “The South Conway County School District has stored some of our frozen items in one of their freezers that they are not using — it has just been a community effort.

“We have united these churches and provided other items, such as toiletries or other needs. The whole community has all worked together well.”