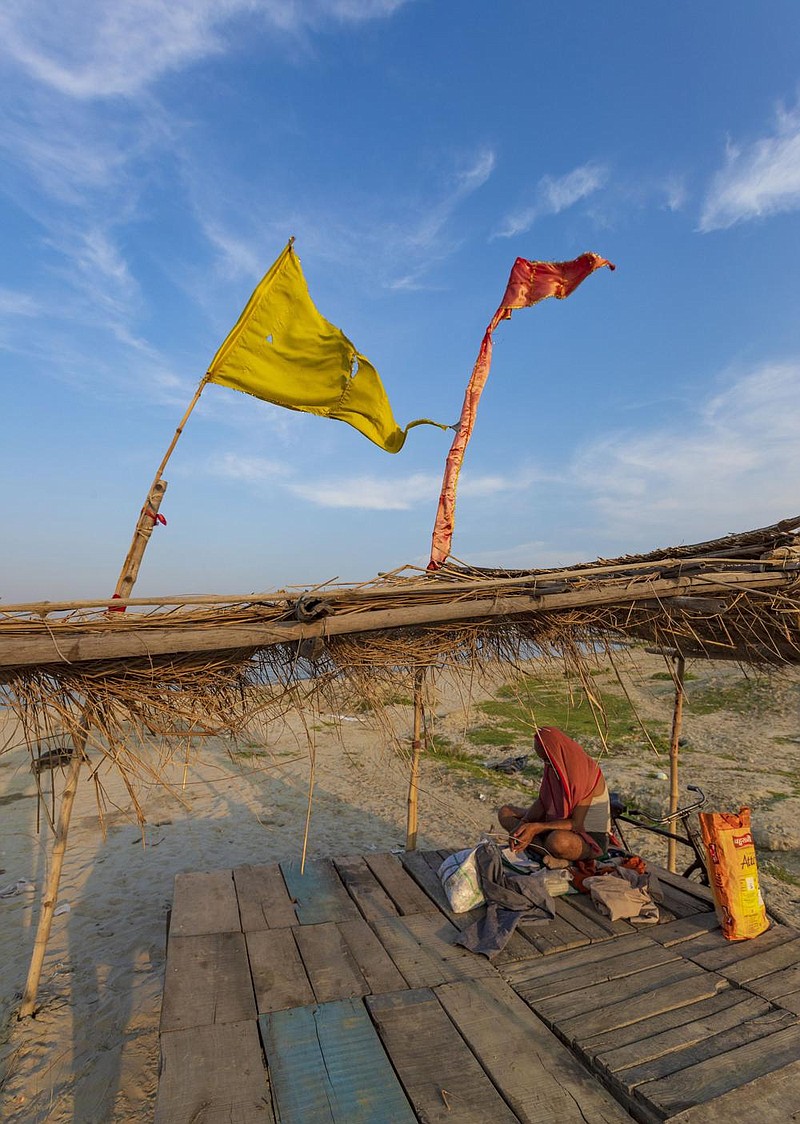 A Hindu holy man performs rituals Friday at the con uence of the Yamuna and Ganges rivers in Prayagraj, India. (AP/Rajesh Kumar Singh)

PARIS -- After a 14-hour battle, firefighters extinguished a blaze that broke out on a French nuclear submarine during renovation work.

The Defense Ministry said no one was injured, and insisted the risk of radioactivity released by the fire is "zero" because the vessel's nuclear fuel and all its weapons had been removed before the renovations began in January.

But it took 100 firefighters from three emergency services as well as specialized submarine teams more than 14 hours to put out the blaze, the ministry said. It is unclear whether the ship is salvageable.

The fire broke out Friday morning in the Mediterranean naval port of Toulon, and was extinguished after midnight, the ministry said in a statement Saturday.

All workers and sailors aboard the submarine when the fire broke out were safely evacuated, the regional maritime authority said. The Var-Matin newspaper published images of white smoke rising from the port, and reported that some of those aboard fled through the submarine's torpedo holds.

The vessel, named Perle, is the most recent of France's six Ruby class nuclear attack submarines, and entered service in 1993, the ministry said.

BEIJING -- Rainstorms killed five more people in a southern Chinese region already reeling from heavy flooding over the past week.

The government of Zunyi city, south of the metropolis of Chongqing, said Saturday that five people had died and eight others were missing after storms that began late Thursday.

A statement on the government's website said at least 13,000 people had been evacuated, more than 2,000 homes damaged and numerous sections of roads and three bridges destroyed in the city in Guizhou province.

Earlier storms left 13 dead in nearby Hunan province and the Guangxi region.

Seasonal flooding regularly strikes the lower regions of China's major river systems, particularly those of the Yangtze and the Pearl to the south.

More than 200,000 people have been forced to seek shelter and economic losses are estimated at more than $500 million, the Ministry of Emergency Management said.

Guangxi's crucial tourism sector, already hit hard by the coronavirus pandemic, has been set back further by the floods.

Authorities have sought to mitigate flooding through the construction of dams, such as the Three Gorges structure on the Yangtze.-16-1

CAIRO -- A dozen people were missing and feared drowned off the coast of Libya on Saturday after a boat carrying around three dozen migrants bound for Europe capsized in the Mediterranean Sea, a U.N. official said.

Safa Msehli, a spokeswoman for the International Organization for Migration, said the shipwreck took place off the coastal town of Zawiya. The town is about 30 miles west of the capital, Tripoli.

She said that among the missing were two children, and that at least 20 migrants from Chad, Nigeria, Egypt and Sudan were rescued and returned Libya.

"The search continues to recover the bodies," Msehli said. She added that the migrants had no life jackets, the boat was in poor condition and had capsized shortly after setting off.

Alarm Phone, an independent support group for people crossing the Mediterranean, said it received a call from a relative of a migrant who fled Libya that a boat was in distress.

The group said it could not contact the boat. Later, the relative initially reported that at least 15 migrants died at sea, and at least 17 others were returned to Libya, it said.

Libya, which descended into chaos after the 2011 uprising that toppled and killed longtime dictator Moammar Gadhafi, has emerged as a major transit point to Europe for African and Arab migrants fleeing war and poverty.

LJUBLJANA, Slovenia -- Police in Slovenia briefly detained seven people who they said attempted to pull down a security fence around the parliament building during the latest in a series of anti-government protests.

Thousands of Slovenians have participated in protests against the country's center-right government every Friday for the past several weeks. Police estimated that about 5,000 attended the latest one Friday evening, when protesters rallied on foot instead of on bicycles as in previous weeks because of coronavirus restrictions.

The protesters are unhappy with the policies of right-wing Prime Minister Janez Jansa. They accuse him of fueling divisions and curbing media and environmental standards.

Jansa has described the protests as the work of left-wing extremists.

Earlier on Friday, a few dozen people gathered outside the U.S. Embassy in Ljubljana in support of anti-racism protests in the United States that started with the death of George Floyd in the custody of Minneapolis police.

Slovenia is the home country of first lady Melania Trump.