How will fashion evolve after quarantine ends? 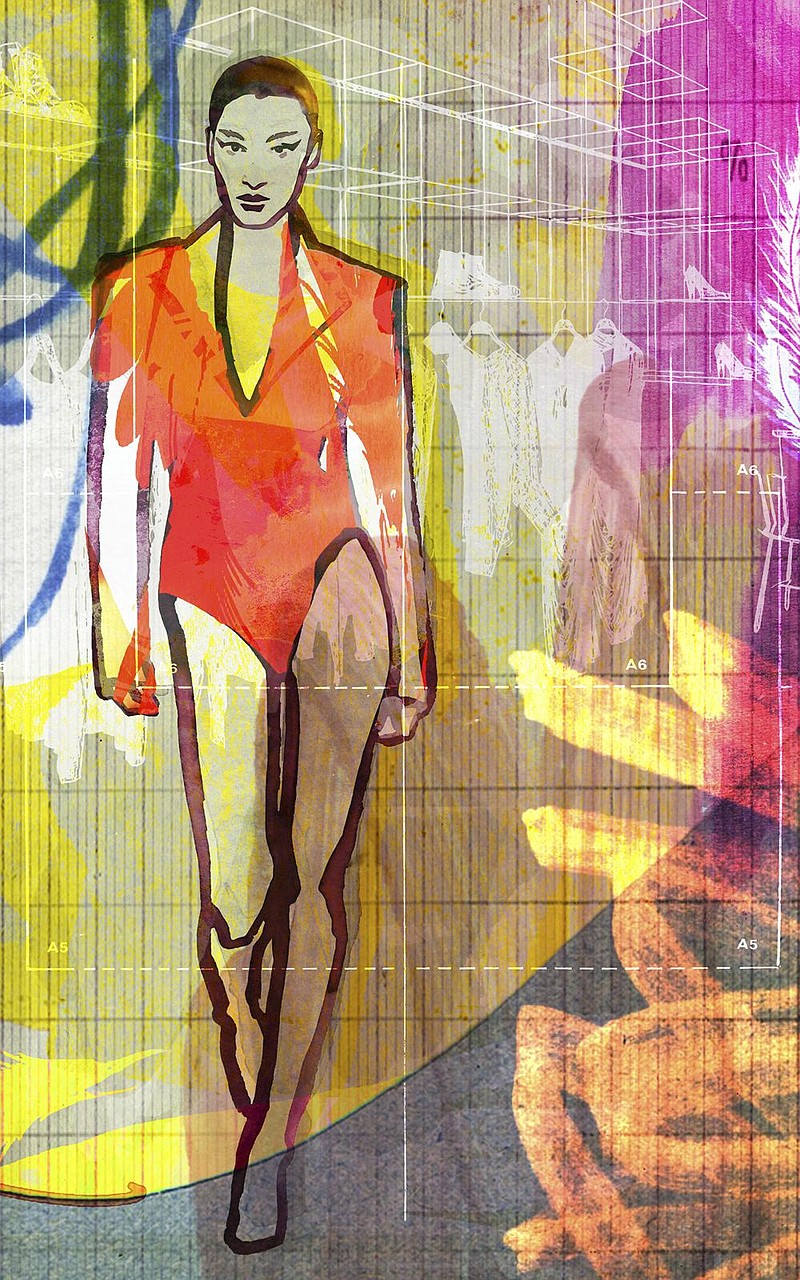 How will fashion evolve after quarantine ends? History and human nature prove we will dress up again. What that looks like is the real question. (The New York Times/Marianna Gefen)

It is a truth that may be hard to imagine in a world devastated by illness and economic insecurity, ripped apart by racism and unrest, but we will get dressed again.

Dressed not for the anonymity of the hospital or the essential workforce, the heat and heartbreak of the protest, the anomie of the supermarket or the park, but for the next stage catharsis. Capital D Dressed. It is both history and human nature.

"We will come out of this, like we come out of a war," said Li Edelkoort, a trend forecaster. "The buildings are still there, but everything is in ruins. We will want two things: security and to dance."

"We will be aching for something new, to refresh our personalities," she said. "Eccentric clothes, romantic clothes."

And that is why, after months in which the death of fashion was proclaimed loudly and regularly, a week when it was once again forced to confront its own role in preserving inequality, the motor of the industry has begun to shift into gear once more, in Europe and Asia if not yet in the United States, where stores remain nailed shut.

Thus far, there has been a lot of focus on the "system." A lot of anguish about the need for change and angst over shopping. Will anyone ever want to do it again?

It's the wrong question.

What we should be asking is: When we re-engage with a world pockmarked by pain and see one another -- from more than just the shoulders up -- what will we want to wear?

It sounds ridiculous: Who cares what we will wear when there has been so much tragedy and economic destruction when old wounds left to fester have been gashed open once again? But the root of that question is as cyclical as history: What will our post-crisis identities look like?

THE QUESTION OF CLOTHES

Not that there's anything wrong with those changes; many are laudable, if still in draft form. The fashion circus is a creaky circus and in need of an update -- not to mention even more meaningful grappling with race and representation in hiring and supply chains. Shows will be entirely digital at least until September, if they happen at all this year. (Many designers -- Dries Van Noten is one -- think not.) The British Fashion Council and the Council of Fashion Designers of America together published a statement effectively urging an end to the traveling pre-collection extravaganzas.

"Open letters" to the industry have been issued, signed by a variety of retailers and mostly independent designers, pledging allegiance to a "right-seasoning" of store deliveries so that coats are sold when it is cold, bathing suits when it is warm, and sales take place after the big gift-giving seasons, not before.

And speaking of stores: They are reopening (or were, until they became fearful of damage from the protests), with hand sanitizer stations, social distancing, plexiglass protection and regular disinfecting. Still, the retail bankruptcies keep coming, the numbers get worse and worse.

It's not going to be a need for more leggings that solves that problem; those we can get online. (And besides, hasn't everyone realized that what we need is elsewhere?)

It's going to be the irrational, emotional pull of a ... something. The gut-punch of recognition that comes from seeing a new way to cast your self. One that signals: "Yes, I have changed. Yes, things are different. Now we emerge in a new world."

It's on fashion to define that something because that something is going to be how history remembers whatever happens next. It will do what clothes always do, which is symbolize a moment and give it visual shape. What that shape will be is the existential question facing designers right now.

THE END OF (FASHION) HISTORY

That may be true, and though it's possible that this really is the end of fashion as it has been defined and disseminated by the aesthetic empires of the West -- that Newton's third law of motion no longer applies; that the Marxian thesis-antithesis-synthesis cycle that has powered our clothing choices for decades is over -- it probably is not. If I were one of the companies currently crowing about being the "it" brand of the WFH wardrobe or trying to clothe the uprising, I would not be resting on my laurels.

It is even more likely that we will develop some sort of Pavlovian association with the clothes that became the uniforms of our isolation and our impotence; that to see them will send us subconsciously down a wormhole to the pandemic; that what we will need is exactly the opposite.

That's what the past teaches us anyway.

Times of great trauma also produce moments of great creativity as we attempt to process what we have been through. The functional side of that is fashion. After periods of extremes -- war, pandemic, recession -- dress is a way to signal the dawning of a new age.

One of the most obvious examples of this, said Jessica Regan, the associate curator of the Costume Institute at the Met, is the period after World War I and the flu of 1918, when the lavish embellishment and physical liberation of the flapper era and the Harlem Renaissance emerged. Think, too, of the Dior New Look of 1947, which, with its acres of skirts and tiny waists, served as a direct riposte to the privations of World War II and the Depression. (It was, literally, a new look for a new time.)

A similar transformation took place after the bubonic plague swept the world in the mid-14th century. Valerie Steele, the director of the Museum at the Fashion Institute of Technology, noted that the scourge gave rise to the more body-conscious dressing, plunging décolletage and lavish adornment in Europe that came to characterize the well-off of the Renaissance. "A symptom, perhaps, of people seeking pleasure while they could," Steele said.

As recently as the mid-1970s, the oil crisis and the resulting recession gave birth to discorama and the explosion of color and tactility that was the Yves Saint Laurent Ballets Russes collection. The financial crisis of 2008 led, a few years later, to a backlash to the backlash and the luxury logos that dotted garments with the ubiquity of daisies in springtime.

This is not necessarily a sign of indulgence. It's a statement of belief in the power of beauty to lift the spirit. Fashion is created for the future, and that implies faith in that future.

It suggests, said Jonathan Anderson, the designer of Loewe and of JW Anderson, who recently went back to his Paris office for the first time since his Loewe show in February, that we are nearing a time that demands "utopian fashion." Volumes and colors that are "completely out there."

We "will want beautiful things," Alessandro Michele, the creative director of Gucci, said in a recent Zoom news conference. "The bamboo handle bag was created after World War II. It was a time of the rebirth of beauty."

That also raises the stakes for an industry that has increasingly treated itself and what it makes as disposable. People may buy clothing that celebrates frivolity. But that is not the same thing as buying frivolously. Especially when money and where you spend it can make a political statement.

"This has taught us that we don't miss stuff," Pierpaolo Piccioli of Valentino said via Zoom. "We miss people. We don't need another T-shirt exactly the same. We need something that delivers an idea, a culture." Something that communicates a sense of the hands that have touched a garment, the imagination that has created it, the effort that has gone into it.

No one is going to rush out to buy a whole new wardrobe, nor are we likely to see the "revenge buying" in China that sparked what was reportedly Hermès's best sales day turn into a trend. Indeed, analyst reports from Bain and the Royal Society for the encouragement of Arts, Manufactures and Commerce have found that people say they expect to buy fewer clothes, though not necessarily to spend less. There will be, said Lucie Greene, a consumer insights strategist, a certain amount of shame associated with having the extra income that allows for buying new clothes.

"The continual desire for newness for the sake of newness will feel very inappropriate," she said.

As in 2008, when "stealth luxury" became a part of the vernacular and logo-a-gogo fell into disrepute, overt displays of wealth will probably be toned down. (Piccioli said he had already moved away from the logo.) So will the immediately identifiable decade-referencing trends that labeled clothes so 1980s, so 1990s. But, Greene said, "a beautiful piece that can be worn for multiple reasons for multiple years? That will be important."

When going to a restaurant for the first time in a very long time, or having a dinner party with friends becomes an event -- when, as Anderson said, everyday moments become "bigger" -- the occasion will demand a costume to mark it. And if a dress (or a suit) becomes a totem of change, then it is not a casual purchase or one to be thrown away later.

"I have a feeling that the things we make have a longer life than the one we have allotted to them," Michele said.

For years, fashion has fretted about the meaninglessness of its seasons, partly because climate change and globalization rendered them null and void and partly because there were so many collections, they couldn't be temporally defined. (Pre-spring, after all, is simply ... winter.)

Now it is actually in everyone's interests to jettison them entirely. Timeless fashion is fashion that holds its value and can be worn and reworn. It can also be sold and resold. It does not become passé in a matter of days. This may mean that fewer garments are made and bought and shown. It may mean a contraction of volume that will affect manufacturers.

In the short term, this could be painful, though the short term is already full of pain. In the long term, it will help solve problems, including that of sustainability. (Eco-materials are good, but fewer materials staying in our closets longer is better.)