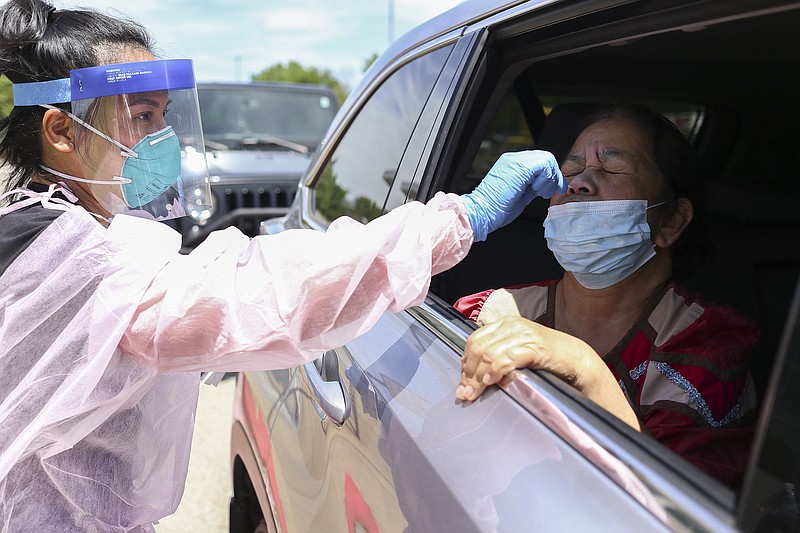 SPRINGDALE -- The Marshallese make up no more than 3% of Northwest Arkansas' population, but they have suffered half of the covid-19 deaths so far in that region, figures show.

"The community is devastated," said Eldon Alik, consul general for the Springdale consulate of the Republic of the Marshall Islands.

As of Friday, state Department of Health figures show that 6% of all confirmed covid-19 cases in Arkansas are Pacific Islanders, a category that includes Marshallese. Pacific Islanders account for 0.4% of Arkansas' population, according to the latest census estimate.

Community Clinic, which has four covid-19 testing sites in Northwest Arkansas, had tested 767 Marshallese patients as of Thursday, and 31% of them tested positive, according to Judd Semingson, the clinic's chief executive officer.

Lack of testing as the pandemic took hold in March and April was a big factor in allowing the disease to spread among Marshallese Arkansans, said Dr. Sheldon Riklon. Riklon is a researcher at the Northwest campus of the University of Arkansas for Medical Sciences and works as a family practice doctor at Community Clinic.

But Melisa Laelan, director of the Arkansas Coalition of Marshallese, was quoted in a March 17 Northwest Arkansas Democrat-Gazette article as saying the state's coronavirus warnings weren't reaching Marshallese because none of the cautions were issued in the Marshallese language.

Riklon warned in an April 17 article in the Northwest Arkansas Democrat-Gazette that the lack of testing for covid-19 among the Marshallese increased the likelihood that it would spread quickly if it reached that community.

"This is one time I wish I was wrong," Riklon said Tuesday.

Dr. Jennifer Dillaha, the state Department of Health's epidemiologist, said in a statement Friday that the Marshallese community received priority for testing, but the shortage of tests in the pandemic's early stages was a serious problem.

"The Marshallese have all along been on our top list to be watched," her statement says. "Insufficient testing capacity was a problem for the whole state in mid-April."

The department prioritized covid-19 testing for the Marshallese through its Bates Outreach Clinic in Springdale, she said. As soon as the department had access, it placed an "Abbott ID Now" machine capable of rapid test results for coronavirus at the Community Clinic, the statement said.

The Marshallese received follow-up testing of household members and other people in close contact with coronavirus cases as soon as possible, the statement continued.

On April 19, Dr. Nate Smith, the state's secretary of health, assured the public during a public briefing on the pandemic that his department was keeping a close watch on the Marshallese. He noted that the Marshallese appeared to be underrepresented in racial breakdowns of covid-19 cases in the state at that time.

At an April 23 briefing with the governor, Smith said: "We are particularly concerned about infections, hospitalizations and deaths in some of our harder to reach communities where there may be barriers of language or culture, so we are looking at that very carefully.

"We have already been working with the Latino community [and] the Marshallese community preparing messages culturally adapted and in the proper language. We will continue to do that but we will also make sure that we are doing adequate testing, as well," Smith said.

Northwest Arkansas has the largest population of Marshallese in the United States outside of Hawaii, census figures show. The Marshall Islands are a former U.S. territory about 2,000 miles west of Hawaii.

The Marshallese are allowed to travel freely to the United States under a treaty between the two countries. Northwest Arkansas became a destination for many of them because of employment opportunities and a lower cost of living. Also, as the Marshallese community became established there, it attracted more of the islanders.

The Marshallese are prone to underlying health conditions -- including high blood pressure and diabetes -- that make an outbreak of covid-19 riskier for them, Riklon said.

"Lack of access to health care is a big problem among the Marshallese," Riklon said. "The pregnant and children have access to Medicaid, but the adults are facing unemployment, jobs that never carried insurance benefits anyway, and many of them part time, and no state or federal Medicaid. They are already worried about their bills."

They are generally reluctant to incur a doctor bill until they have no choice, and by that time they are severely ill, he said.

Pearl McElfish, vice chancellor at the Northwest campus of UAMS, agreed that the biggest challenge in controlling the pandemic among the Marshallese is economic.

"Marshallese are not in the types of jobs you can work from home," she said. "When you work for a cleaning service or in the poultry industry, you can't self-isolate while working from your laptop."

Jobs generally held by the Marshallese include food processing, particularly poultry, where people work in close quarters. Currently, there are hundreds of covid-19 infections among poultry plant workers, Health Department figures show. The plants are deemed essential industries by federal and state governments, and have been allowed to stay open during the pandemic.

"Tyson and others are taking this very seriously, and they are doing their best," McElfish said. "I want to make that clear. But you can't virtually cut up a chicken."

Also, Marshallese families have several generations living in the same home because they can't afford not to, McElfish said. And they cannot afford enough room for social distancing at home. Living from paycheck to paycheck is common, she said, with many families afraid of missing work and losing wages.

"I know one household that went from four wage-earners to none" because of coronavirus exposure, she said.

Compounding that is that the Marshallese community is close-knit, Alik said.

Alik said he moved to Northwest Arkansas in 2017, and Tarkwon was one of the first people he met. Tarkwon helped him find a place to live and was humble despite being a descendant of Marshall Island chiefs, he said.

Tarkwon's son, Alister Tarkwon, 31, described his father as kind and humble. He mostly remembers his father taking part in community events and getting together with the relatives for holidays and birthdays.

His father, who had diabetes, was in the hospital battling covid-19, at times on a ventilator, for about three weeks before it took his life.

Stories of stricken friends and family members among the Marshallese are increasing.

On Wednesday, Anita Iban chronicled her friends, relatives and church acquaintances who are sick or have died.

Iban is a parent liaison for the Springdale School District, and her husband is the pastor of Anij Emman Church, an Assemblies of God congregation in Springdale.

"It's eating up our community fast," said Carlness Jerry with the Marshallese Education Initiative.

"There's not enough for all of them," Iban said.

Jerry said her organization tries to stay updated on the latest news about the virus and prevention, and shares that information through its website, but not everybody has a computer.

The Marshallese are taking precautions by staying at home, wearing masks and social distancing. Church and family gatherings, so important to the community, have been canceled, Iban said. Still the virus spreads.

"What we're working toward, what we need, is to help people get tested and to get them the resources they need to self-isolate," McElfish said.

"There's a saying that goes 'Don't let the perfect be the enemy of the good,'" McElfish said. "We have to do this and do it now, not perfect a system. We don't have months, weeks or even days."

Much of the disease's initial spread among the Marshallese is unknown, Riklon said. "I'm not sure we'll be able to pinpoint where it started."

"We're trying to find the hot spots, but that's difficult to do because we have multiple hot spots. All we can do is keep practicing social distancing, wash our hands and stay home. Think twice about having to go out."

Information for this article was contributed by Laurinda Joenks of the Northwest Arkansas Democrat-Gazette.

The Marshallese migration to Northwest Arkansas can be traced to one man. In the late 1970s, John Moody left the island chain in the Pacific to attend college in eastern Oklahoma. Moody found a job in Springdale after graduation, married a local woman and started telling his island relatives about life and opportunities in Arkansas.

That sparked the first wave of Marshallese immigrants in the 1980s, according to Carmen Chong Gum, a former general consul at the Republic of the Marshall Islands consulate in Springdale.