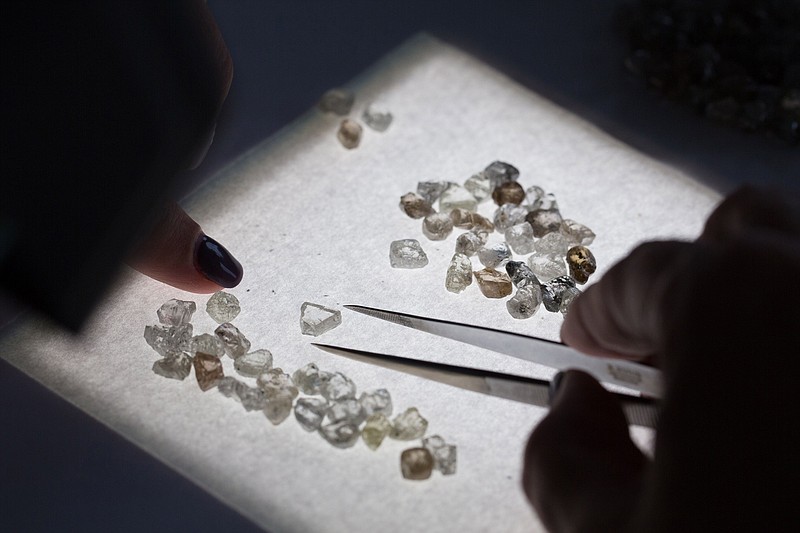 An employee sorts a collection of rough diamonds at the United Selling Organisation of Alrosa PJSC sorting center in Moscow. MUST CREDIT: Bloomberg photo by Andrey Rudakov

In one of the world's biggest diamond vaults, hidden inside a nondescript office compound on the dusty outskirts of Botswana's capital, the precious stones just keep piling up.

Owner De Beers, which mines and auctions most of its gems in the southern African nation, has barely sold any rough diamonds since February. Neither has Russian rival Alrosa PJSC. Now, as the coronavirus restrictions that froze the global industry for months begin to lift, the unsold diamonds present a dilemma: how to reduce billions of dollars' worth of stocks without undermining the nascent recovery.

The pandemic has devastated the diamond world. Jewelry stores closed their doors, India's cutting and polishing artisans were forced to stay home and De Beers had to cancel its March sale because buyers couldn't travel to view the merchandise.

De Beers and Alrosa have moved to defend their market. The miners refused to cut prices, instead allowing buyers unprecedented freedom to renege on contracts to buy stones. They've also reduced production in an effort to control stock levels. Yet the diamonds keep piling up.

The five biggest producers are probably sitting on excess inventories worth about $3.5 billion, according to Gemdax, a specialist advisory firm. The figure could reach $4.5 billion by the end of the year, or about one-third of annual rough-diamond production.

"They've tried to restrict rough-diamond supply to protect the market and protect value," said Gemdax partner Anish Aggarwal. "The question will be, how does this destocking occur? Can miners destock and keep protecting the market?"

After being forced to cancel the March event, De Beers managed to hold a sale in May but didn't announce the results like it usually does. According to people familiar with the situation, the sale yielded about $35 million. Last year that sale was $416 million.

The next big test for the industry comes later this month, with De Beers's next sale. The company is going out of its way to attract customers, including by allowing diamond viewings outside of Botswana. Buyers will still be allowed to refuse goods they've contracted to purchase.

De Beers's customers, some of whom had been deeply frustrated with some of the company's sales methods in recent years, have welcomed its actions so far.

Yet while De Beers and Alrosa have stood firm on pricing - even refusing approaches from customers offering to buy at special terms - smaller diamond producers have dropped their own prices, according to people familiar with the matter.

Junior miners, some of which were fighting for survival even before the pandemic, have been offering steep discounts of as much as 25% in trading centers such as Antwerp, the people said. That could make it tough for the large companies to convince big buyers to come to the table.

Diamond miners face "a double whammy of weak prices and a sharp decline in sales volumes on a scale reminiscent of the 2008-09 crisis," Societe Generale analyst Sergey Donskoy said recently.

Managing supply has been a constant headache for the diamond industry ever since De Beers ended its monopoly. The company spent the early 2000s running down about $5 billion in stock, and industry inventories ballooned during the global financial crisis and again in 2013. Each time, selling down the stockpiles has caused buildups of polished diamonds, putting huge pressure on the cutters, traders and manufacturers that buy from them.

It may be even harder this time around. Those middlemen of the industry were already struggling even before the pandemic, while retail is one of the sectors hardest hit by the virus measures.

Alrosa said last week that its diamond inventories could rise to 30 million carats by the end of the year, roughly the same as its annual production, but didn't give a value. The company said it wants to cut those stocks to 15 million carats in three years.

There are some signs of recovery. Chinese retailers are open again and India has allowed manufacturing to restart in the key Surat polishing hub, albeit at only 50% of capacity. The main Indian trading offices are allowed 10% of employees on site.

Still, manufacturers bought heavily in the first two months of the year in anticipation of a recovery in the market. With cutting centers shut for the past two months, that inventory is expected to last until July or August. That's left little need to buy now.

"At this stage it's hard to speculate on what the recovery curve will look like," said Aggarwal. "What we're not expecting is an immediate jump back in consumer demand."