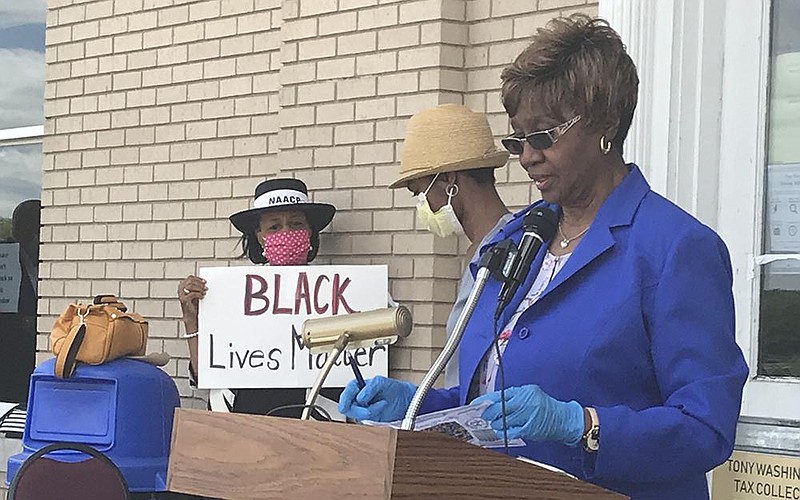 Wanda V. Neal, president of the Pine Bluff Chapter of the NAACP, joined the national organization Wednesday in calling for federal legislation to outline procedures and penalties in cases of police brutality. (Arkansas Democrat-Gazette/Dale Ellis)

In the shadow of a Confederate memorial statue, the Pine Bluff NAACP held a news conference last week.

The group, echoing the call from the national NAACP, demanded federal legislation to be developed that would provide for detailed procedures and penalties in cases of police brutality, and called for change.

The news conference came about in the weeks after George Floyd, a 46-year-old black man in Minneapolis, died on May 25, handcuffed and lying facedown in a street while a white police officer knelt into Floyd's neck for nearly 9 minutes. A video showed Floyd gasping for air and groaning the words "I can't breathe" before falling silent and still.

Pine Bluff organizers held the news conference at the Jefferson County Courthouse. Because of street construction on the north side of the courthouse, speakers stood on the south side, in the shadow of the Confederate memorial statue that still stands before the south entrance.

Before the beginning of the news conference Wednesday, Theodis "Ted" Davis, an election commissioner in Jefferson County and an active member of the County Democratic Committee, said he viewed the Confederate statue as an inappropriate symbol for what the people of Jefferson County stand for.

Davis said the statue -- which was constructed 45 years after the end of the Civil War -- was moved from its original location at Pine Bluff High School to the south side of the Jefferson County Courthouse in 1974, three years after the integration of public schools in Pine Bluff.

"The students didn't want it there. It does this whole community an injustice to even have this on the public grounds and certainly here at the doors to the halls of justice," Davis said. "It should not be here."

After an opening benediction, Janice Roberts, a member of the Pine Bluff NAACP executive and legal redress committees, greeted the crowd of some 50 people, almost all black, gathered at the courthouse steps.

"We want to open a dialogue with police and assist in developing policies that will dismantle senseless killings," Roberts said.

Pine Bluff Councilwoman Joni Alexander expressed disappointment at the lack of diversity among those who gathered.

"What I've seen standing here today as I stand in front of this Confederate statue, I can probably name about 90% of the people here by their first names," Alexander said. "I'm disappointed that other than two people, the majority here are black, and of the only ones here who are not black, one is on the program and the other is a reporter."

To truly move forward, Alexander said, will require the involvement of people from all walks of life and ethnic backgrounds.

"I don't want any of this to be in vain. I think George Floyd's death was the straw that broke another camel's back," she said. "I don't want this to be like other times when we have come together when this fuel and this passion and this emotion just goes out. I want this to be the catalyst for us to do more, and more importantly, to get more people actively involved in their local government."

Henry "Hank" Wilkins V, related the story of his great-great-grandfather, Henry Wilkins Sr., who was born a slave during the Civil War and lived to the age of 104.

"Because of that fact I don't have to look up historical records or documents to learn about his life," Wilkins said. "I can speak to my aunts and uncles, my father, my grandmother, about the kind of man he was because he lived long enough for them to know and remember him. And every time I think about this I am astounded that I, a millennial black man, am only one generation, one degree of separation removed from his life.

"I'm astonished that I can speak to a living relative who touched the flesh of my great-great-grandfather, whose first breath was deemed to be the property of another human being."

Wilkins said it is that experience that for him drives home the reality of slavery in America.

From 1619 when slaves were first brought to America to the passage of the 1964 Civil Rights Act, legally enforced racism has been administered on American soil," he said. "For 345 years, all lives didn't matter."

Pine Bluff Police Chief Kelvin Sergeant and Jefferson County Sheriff Lafayette Woods, Jr. both pledged to ensure that their departmental use-of-force policies would not allow tactics that could lead to brutality against citizens. Sergeant said he would issue an order before the end of the day to forbid the use of chokeholds and kneeling restraints on the part of officers as a means of subduing suspects.

Sergeant said that when he joined the Pine Bluff Police Department in 1995, there were 13 black officers on the force, and his hire came about because of affirmative action.

After 25 years on the police force, two of those as police chief, Sergeant said he still feels the threat of racism at times, as recently, he said, as last year.

"I'm a high ranking official. I'm chief of police. And it dawned on me as I drive across the country, I have fear, I have fear when I see a police officer," he said. "We were traveling in south Arkansas, and I was stopped by an agency -- I will not name the name -- but me and my wife were traveling, and we were stopped, and I was treated so rudely by the police."

Sergeant said that incident popped into his mind when he saw the news about Floyd's death, which he called "a heartless display of police brutality."

Wanda V. Neal, Pine Bluff NAACP president, said what makes the death of Floyd different -- why she thinks the backlash against police tactics that result in the deaths of unarmed black people won't subside until substantive change is achieved -- is the way the incident was captured and portrayed to the American people.

"I think us watching him on TV when they take 8 minutes and 46 seconds," she said -- referring to how long the police officer, Derek Chauvin, knelt on Floyd's neck until he died -- "I started to ask you all to stand for that long, but that's a long time. But I think it's going to be different this time because of that."