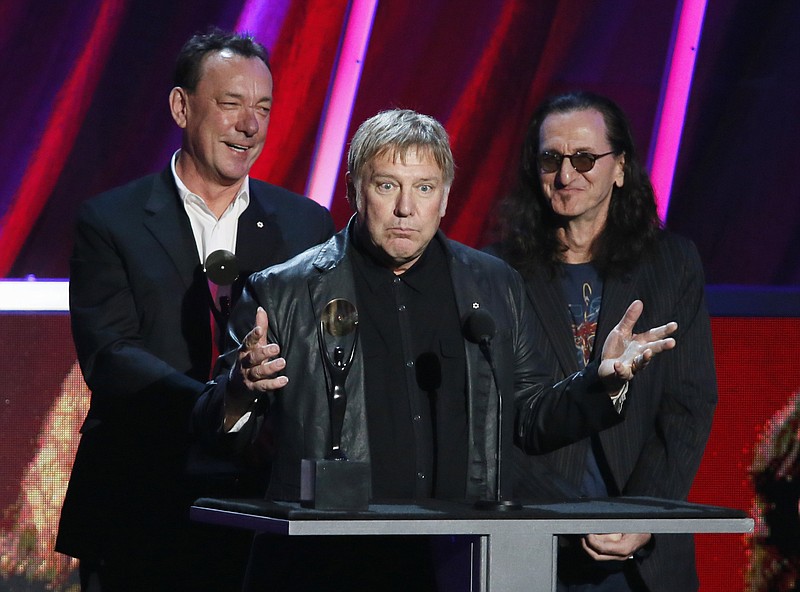 One likes to believe in the freedom of music/But glittering prizes and endless compromises/Shatter the illusion of integrity.

— Rush, "The Spirit of Radio," lyrics by Neil Peart

Last month, Rush's 1980 album Permanent Waves was released in several special anniversary formats, featuring live bonus tracks and, depending on the level, other extras. The Super Deluxe Box Set carries a list price of $179.98 while a two-CD set is $19.98. See rushbackstage.com for details.

We had strong ideas in our youth.

We knew how to comb our hair and what blue jeans to buy. We knew how we wanted to present ourselves to the world, how we wished to be received, even if the mirror returned middling results. We knew what bands we liked, and believed we could plumb the character of a person by flipping through their record crates and scanning their bookshelves. We were cruelly judgmental and scared to death.

It was not simpler in early 1980. There was a Sunday School teacher in the White House and a Hollywood actor running for president; the Iranians were holding 52 Americans hostages in Tehran. We were told we were in a recession; unemployment was high. We were at that age when possibilities begin to foreclose rapidly, on the cusp of adulthood where one might begin to mourn all the people one would never become.

We had already lost some friends. One of the popular high school girls had died in a ski boat accident. Another kid, whose superpower was archery, had driven drunk, smashed his Camaro and decapitated himself. There had been a suicide in our class. And a friend of a friend intervened in a Saturday parking lot argument between a some country-come-to-town boy and his best girl and was blown apart by a shotgun.

We knew the world was real and would hurt us.

In the U.S., Rush's Permanent Waves came out in January 1980, just about the same time as The Clash's London Calling. While more of my friends chose the former than the latter and I considered myself more of Joe Strummer's tribe, I didn't object if someone wanted to play the Permanent Waves tape while we rode around drinking beer.

"The Spirit of Radio," which is sometimes misidentified as the first single released in 1980 (it wasn't released commercially as a single until March, though radio stations were sent promo copies in December 1979), was everywhere, expressing — more articulately and only barely more politely — some of the sentiments punk rock had seized on four or five years before. 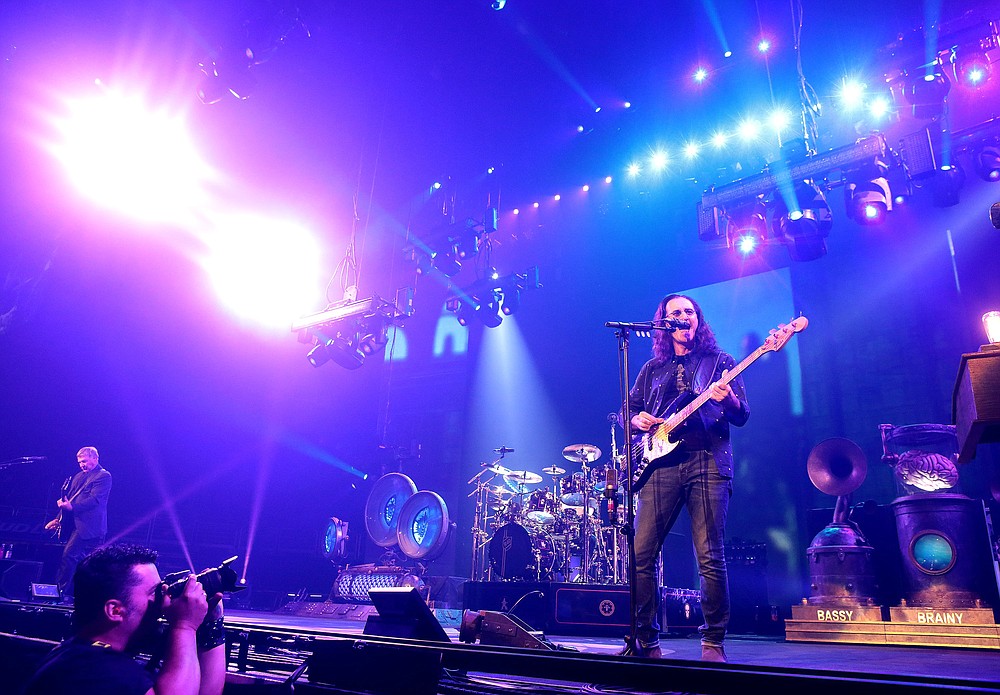 Still, it grated to hear Geddy Lee yipping the concluding verse, a sly comment on the manufactured, strained poignancy of Simon & Garfunkel's "The Sound of Silence:"

For the words of the profits/Were written on the studio wall/Concert hall/And echoes with the sound of salesmen/Of salesmen, of salesmen

Now I can see that I misperceived Rush as a cynical enterprise and placed the band in the same bin as cartoon rockers KISS (whom they had opened for on a 1974 tour). I had heard a lot of Rush over the years but never really listened to them.

They were, and to my ears still remain, an awkward boys' band, marked by Lee's helium wheedle, lots of shifting time signatures and the late Neil Peart's windy lyrics that, sometimes with a chilly specificity, evoked the bedroom reading of lonely suburban teenage boys — J.R.R. Tolkien and Ayn Rand (Peart, who died earlier this year, allowed that he eventually outgrew as he became a "bleeding heart libertarian").

My friends who loved them, really loved them, did so in the same way they loved their geeky enthusiasms, their Dungeons and Dragons and Philip K. Dick.

I suspect that one of the things they loved was the complexity of the music, its density and obvious virtuosity of the players. In concert, Peart sat behind a drum kit the size of a small city, with tons of shiny, delicious gear at his disposal, while Lee not only played intricate bass lines but also handled the synthesizers and stomped on triggering pedals and maintained that laser-keen voice, sounding like Robert Plant with all the roughness sanded down and polished off.

Then there was Alex Lifeson, the guitarist, who could sound like Allan Holdsworth or Genesis' Steve Hackett, alternating between slabby chords, intricate single note runs and weird effects-bathed fills.

They were a busy band, who made music-making look like an expensive space mission, with much dramatic dial twiddling and deliberate professionalism. If your idea of rock 'n' roll was closer to church, closer to demonic possession, closer to tongues of fire and accidental irreproducible riots set off by enthusiastic amateurs, it wasn't surprising that these scientists might leave you cold.

They were also Canadian, which seemed even less exotic than American.

One of the things said about Rush is that you either love them or hate them, but in my experience, the opposite of love is not hate but indifference. And I was as indifferent to Rush as I was to any band I was regularly exposed to.

YOU CAN GO YOUR OWN WAY

My experience with progressive rock was pretty light — we'd played a lot of Jethro Tull's Aqualung and Thick as a Brick, but by the time War Child came out in 1974, we'd moved on. We mainly bought Yes albums for the Roger Dean cover art. Genesis was in the mix, but I remember being baffled by the Dutch band Focus' Moving Waves (1974), which included the hit "Hocus Pocus;" King Crimson and Gentle Giant were more read about than listened to.

Still, Rush felt more pop than prog, though it wasn't until much later that I familiarized myself with the band's pre-1977 records where they sounded like a Led Zeppelin-inspired bar band (listen to "Working Man," off their 1974 debut album Rush, which was recorded before Peart replaced original drummer John Rutsey).

It wasn't until the second album, when Peart began writing most of the lyrics, that elements of fantasy ("Rivendell," "By-Tor and the Snow Dog") and political philosophy ("Anthem," based on Rand's dystopian novel of the same name) began to filter in.

These days, Rush's mid-1970s albums feel refreshingly naive and ambitious, especially when considered in the context of their times. 2112 came out in 1976, with a 20-minute critique of collectivism for its title track. Just as punk rock was starting to escape the hothouse (only to become as corrupted as everything else exposed on the airwaves), with Bruce Springsteen spearheading a rock and soul revival, Rush was establishing itself as the official band of junior college faculty lounge blowhards everywhere.

Sure, the band was easy to make fun of — but they only seemed humorless. Peart's lyrics were getting sharper, more layered, even a little less didactic. Rush was certainly self-aware — on 1978's Hemispheres they recorded a 9 ½-minute instrumental called "La Villa Strangiato (An Exercise in Self-Indulgence)," which not only encompasses classical and hard rock but manages to interpolate some Warner Bros. cartoon music into the mix.

If they didn't take themselves completely seriously, plenty of others did (and do). U.S. Sen. Rand Paul quoted the lyrics of Peart's anti-collectivist "The Trees" in his political speeches until the band sent him a "cease and desist" letter.

But Hemispheres was obviously not an evangelic album designed to broaden the band's commercial appeal. By 1978, Rush had its fans and its nerdy niche. They weren't trying to be R.E.O. Speedwagon, they weren't trying for hit records. Hemispheres was comprised of only four tracks, one of which once again occupied a whole album side. The band seemed to know what it was, and who it appealed to, and seemed to be happy to reward its fans.

By then we had Tom Petty and the Heartbreakers, we'd soon have Prince. Michael Jackson was emerging as something bigger than the quasi-novelty brothers act that gave him his start.

Then came "The Spirit of Radio," which was in the moment and remains today a great single — immaculate sonics grafted to a typically over-reaching Peart lyric that nevertheless feels authentic. Like Elvis Costello's "Radio, Radio" it rails against the commercialization of the airwaves and the suppression of individual character by corporate forces, but not before acknowledging the medium's energizing power.

While Costello's song is a diatribe, recognized by the powers that be as such and essentially banned, Rush's song became the band's highest charting single and remains a classic rock staple.

Peart's lyric aside, the genius of the song is the way it changes stations through, in a relatively brief (for Rush) five minutes, a variety of pop music styles, from straight ahead rock 'n' roll, Mersey Beat, prog rock, reggae and ultimately New Wave electronic music. Appropriating the slogan of the popular eclectic Toronto FM rock station CFNY as its title, it serves as a concise history of rock.

"Freewill" is similarly accessible, with a chorus one might call radio friendly. But it's hardly a pop sellout; those quirky shifts in time signature are there, and if you can take your ears off Lifeson's pyrotechnic guitar work, you'll hear the drums and bass raising a jazzy ruckus.

Again Peart's lyrics (here he's considering the ethics of moral evasion) are a matter of taste; you're likely to consider him either one of the best lyricists in rock music or a terrible poseur (most of the time his words serve the song and he was very aware — and amused by — the pomp and bombast of it all). But the first two cuts on Permanent Waves are as audience-friendly as prog rock gets, which means they're probably why a lot of prog rock purists dismiss Rush — and probably why I perceive them as more crowd-pleasing than, say, Henry Cow.

After those two tracks, Permanent Waves turns back into a Rush album, with the overstuffed "Jacob's Ladder" followed by the anomalous "Entre Nous," a sweetly sung rocker with an acoustic chorus that could pass for a love song if we didn't understand it as an allusion to Ayn Rand's The Fountainhead (the French phrase that means "between us" and connotes a kind of special connection is invoked often in the book).

A lot of hardcore Rush fans seem to positively hate "Entre Nous," but it might be my favorite song in their catalog. Which might speak to my unfitness for writing an appreciation of Permanent Waves on the occasion of the release of a 4oth-anniversary special edition.

Rounding out the album is a diaphanous little tune called "Different Strings" that features a remarkable Lifesong guitar solo that fades out just as it seems to crest. Lee, not Peart, wrote the lyric, and Hugh Syme, who designed the band's album covers, plays the simple but affecting piano part.

Forty years on, it's easy to read Permanent Waves as a kind of commercial breakthrough for Rush, an inflection point where they throttle back on the fantasy and philosophy drive and manage to connect with the same audience that bought Journey records and Jefferson Starship's "We Built This City (on Rock and Roll)." And it does represent a retrenchment of sorts, with its more concise arrangements and shorter running lengths, its micro-doses of reggae and New Wave.

But it's still an odd and geeky thing that doesn't even aspire to being cool. Which was always the coolest thing about Rush, they didn't need to be popular or sporty or even angry. They delighted in the complications they made, the way they could stir the noise. They were always themselves, always authentic and heartbreakingly earnest.

There are bands you love apart from the music they make. Rush never had to put on makeup or make up a mythology about themselves. They were never salesmen. They did it their way.