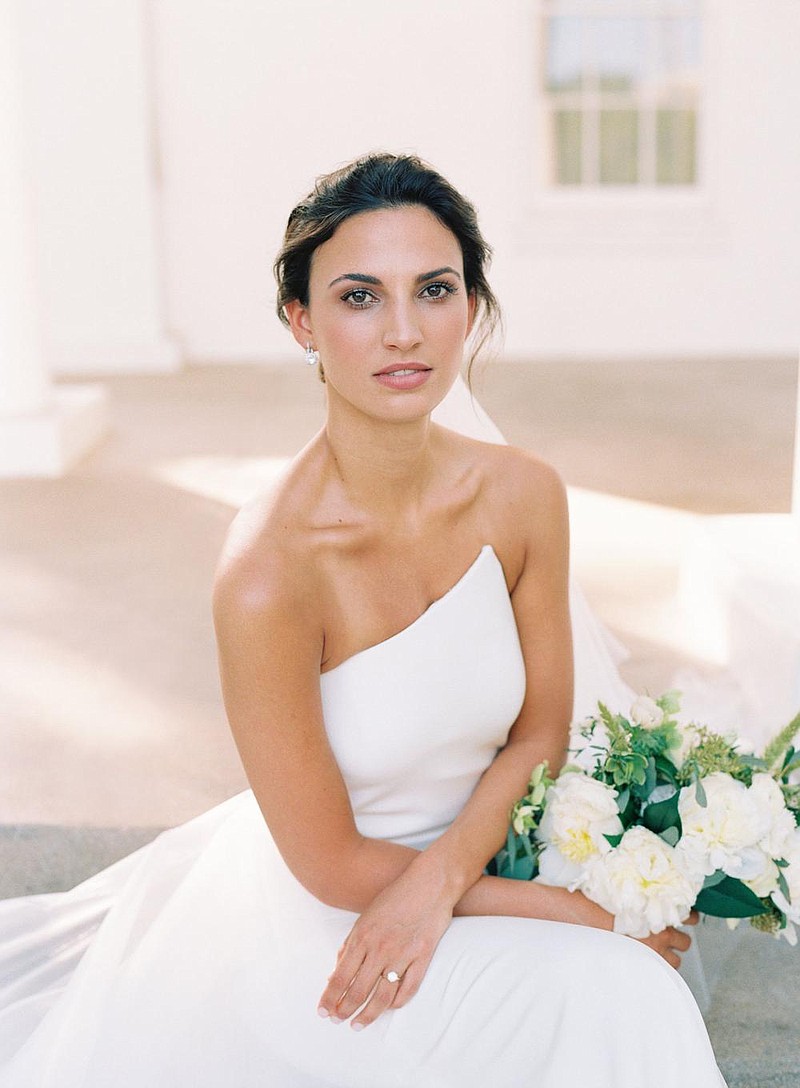 The groom is the son of Patricia and James Drake of Little Rock and the grandson of the late Margaret and Eugene Drake of Hot Springs and the late Dolores and Robert Moellers of Little Rock.

The chancel had two cathedral arrangements of cascading ivy and ruscus with white peonies, white roses, veronica, ranunculus and eucalyptus. Readings were by Mary Ann Gammill of Little Rock, godmother of the bride, and Courtney Drake of Sherwood, sister-in-law of the groom. Nuptial music was by soprano Christine Westhoff and organist Timothy Allen.

The bride, given in marriage by her father, wore a pearl-colored strapless gown made of silk crepe with an asymmetrical neckline. Her fluted skirt had a silver crystal belt at the waist and a detachable illusion horsehair train. She wore a waltz-length, raw-edge veil. She carried a tight Edwardian bouquet of white peonies, white roses, veronica, ranunculus and eucalyptus.

Allison Enderlin of Little Rock served as the bride's maid of honor. Bridesmaids were Chelsey Bailey of Fort Worth; Mackenzie Clyburn of Kansas City, Kan.; Katie Cruz, Day Davis and Mary Drake, sister of the groom, all of Little Rock; Morgan Edwards of Memphis; Meredith Schasch of St. Louis; Kathryn Smith of Rogers; Lindsey Pinkston, Mackenzie Williams and Katherine Tappan, sister-in-law of the bride, all of Dallas. They wore gowns of taupe crepe with trumpet skirts and carried smaller versions of the bridal bouquet. Also assisting the bride were Mary Hargraves of Little Rock and Nikki Munro of San Francisco.

Best man was Dr. Paul Drake of Sherwood, brother of the groom. Serving as groomsmen were Matt Asters of Tupelo, Miss.; Blake Edwards of Memphis; Colby Inboden of Fayetteville; Adrian Klein of Denver; Garrett Quinn of Chicago; Drew Tappan and Madison Tappan, both of Dallas and brothers of the bride; Scott Wardlaw of St. Louis; and Sam White and Jahon Zehtaban, both of Little Rock.

A small reception was held following the ceremony at the home of the bride's parents. In August, a celebration of marriage is planned at the Country Club of Little Rock.

The bride has a bachelor's degree in childhood education and a master's degree in teaching from the University of Arkansas, Fayetteville. She is an elementary school teacher in Little Rock.

After a wedding trip to Antigua, West Indies, the couple will live in Little Rock.