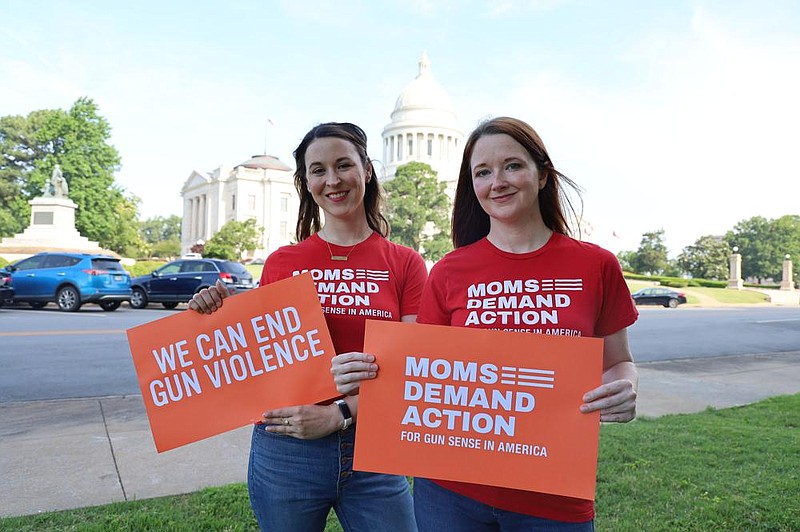 Jessica Scott and Kate Fletcher got involved in Moms Demand Action Arkansas when their chil- dren were little. The national grassroots organization is devoted to reducing gun violence through awareness and gun safety legislation. (Special to the Democrat-Gazette/Dwain Hebda)

Jessica Scott and Kate Fletcher of Moms Demand Action Arkansas can both recall the exact moment they went from ordinary mothers to passionate activists for reducing gun violence.

"I got involved when a child here in Little Rock who was roughly the same age as my daughter, about 21/2 at the time, died after finding an unsecured handgun in his father's nightstand," says Scott, a professor at the University of Arkansas at Little Rock and state chapter lead. "It really hit me hard how accessible weapons were and the particular danger they posed to children.

"For me, I became a mother in October 2015 and shortly thereafter was the anniversary of the Sandy Hook massacre," says Fletcher, state communications lead and a Little Rock corporate lawyer. "I can remember sitting in a rocking chair feeding her in her nursery at 2 or 3 o'clock in the morning, and the horrors of that day hit me. I had always been sad about it, cried about it, but there was something about thinking about those babies while holding my own that just changed me."

Both women found an outlet for their yearning to bring about change through Moms Demand Action, a national grassroots organization devoted to reducing gun violence through awareness and gun safety legislation.

Those approaches include lobbying for changes in background checks and closing loopholes surrounding gun sales, passing out trigger locks and leading Wear Orange Day which calls attention to National Gun Violence Awareness Day, held the first Friday of June. Additionally, the organization's Be Smart program brings the organization's members to community groups to speak on gun safety and the dangers of unsecured firearms in homes that have children.

"What we know from the Centers for Disease Control is that approximately 4.6 million children in the United States live in a house with at least one unsecured, loaded firearm and that's a really terrifying statistic," Scott says. "Last year, almost 1,300 children [nationally] found one of those guns and either injured or killed themselves or someone else.

"[Be Smart] is one of our biggest areas of advocacy and it is one of the ways we have been most effective here in Arkansas. It's enabled us to work even in communities that might not be quite as receptive to other parts of our mission."

Moms Demand Action was born in the aftermath of the Sandy Hook massacre where 20 Connecticut first-graders and six school staffers were gunned down in their schoolhouse. Shannon Watts, an Indiana mother of five, watched coverage of the tragedy and decided she'd had enough. She created a Facebook page, One Million Moms for Gun Control, generating an immediate and overwhelming response that would fuel Moms Demand Action the organization.

Today, the group has chapters in every state; Arkansas' state chapter was founded in early 2015 and now includes 10 community-based teams.

Fletcher and Scott are quick to assert that the purpose of the all-volunteer organization is not to curtail Second Amendment rights and that its mission enjoys nonpartisan support. But they also acknowledge almost any discussion surrounding guns tends to have a visceral effect, particularly in a state like Arkansas.

"Arkansas does present some challenges," Scott says. "We are a state that has a long history of hunting culture and there is definitely that attitude that fears anything that appears to oppose people's ability to do that."

Sincere though the stated intentions are, the two leaders admit there's a degree of ingrained mistrust to be overcome. That's where survivor stories, such as that of Jessica Rogers of Cabot, can be enormously effective.

"In March of 2013, my husband at the time knocked me unconscious in front of my children," she says calmly. "After that incident, I went through the arduous process of obtaining an order of protection, which, in and of itself, was very difficult."

"At the time, we had guns in the house. I remember contacting the local sheriff's department about trying to remove them from the house because they were his. That was where I learned that there was no legal precedence for them to remove them, even though he was charged with domestic violence."

After discovering Moms Demand Action, Rogers formed the Cabot team and became a leading advocate for changing state law such that it would keep guns out of the hands of convicted domestic abusers. Although her efforts to enact the law have thus been unsuccessful, she has been effective in advancing the debate, in part by bucking the traditional anti-gun stereotype.

"I've given gun locks out at different community events and some people initially come up to our booth with very strong body language about what they're prepared to say," she says. "They're surprised when I tell them, 'I'm a gun owner. I believe in gun ownership. I'm a hunter. My husband's in the military.' I support their right to gun ownership, but I also believe there is common-sense legislation that we can all believe in to help keep vulnerable people safe."

Rogers, an artist and mother of four, says the ultimate goal of her involvement is to make the world safer for all children while inspiring her own kids to take action for the common good.

"With my older kids, I have talked to them about what I went through. Some of them were old enough to remember bits and pieces," she says. "I hope my work with Moms Demand Action is a way to show resilience; that you can take something that is a horrific event in your life and use it to speak out and direct hopeful change."