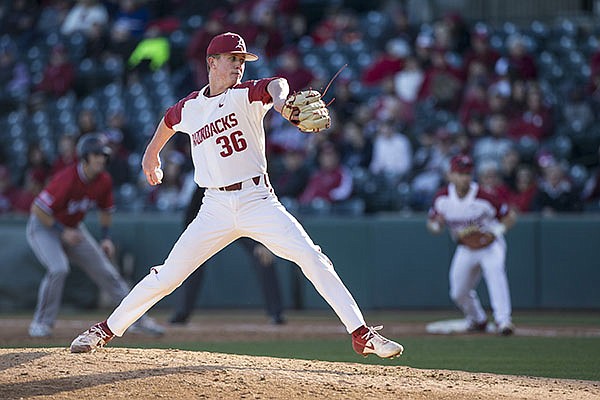 FAYETTEVILLE -- Jesse Barker of Benton thought he had seen the last of Baum-Walker Stadium after playing in consecutive state championship games there in 2018 and 2019.

"That's awesome," said Barker, who is a pitcher for the Bears. "Baum Stadium is a heck of a stadium, and I loved playing there. This is a great opportunity for UCA to face some really quality competition. I think the fans will enjoy it, too."

The recent moves reverse a long-standing policy at Arkansas against playing in-state schools. All four in-state programs will play Arkansas next season at Baum-Walker Stadium, although specific dates have yet to be announced. Arkansas split games against UAPB and UALR in 2019, falling 17-7 to the Trojans on April 2 before beating the Golden Lions 16-4 on April 16.

Pallette and Barker last played together in high school at Baum-Walker Stadium on May 18, 2019, when Benton lost 2-0 to Sheridan in the Class 5A state championship game. Benton also made the state finals in 2018 when current Arkansas starter Connor Noland threw a 4-0 shutout for Greenwood against the Panthers.

Pallette is playing in the Perfect Timing College Baseball League in Springdale this month with Arkansas teammates Braydon Webb, Will McEntire and Jacob Nesbit on the PT Black team. Pallette said he welcomes facing UCA and Barker, his friend and former high school teammate.

"We haven't talked about it much, but I think it'll be pretty cool," Pallette said. "I think our fans will enjoy seeing different [college] teams in Arkansas."

Nesbit and Webb are Razorback players from Texas, where games between Division I college opponents within the state are commonplace. Both players said they look forward to facing schools such as Central Arkansas and Arkansas State for the first time.

"It's always great to have an in-state rival," said Nesbit, an infielder from Coppell, Texas. "There's already a buzz for baseball in Arkansas, and I think these games will get fans excited from all four corners of the Natural State."

Longtime Razorbacks fan Gary Riordan of Little Rock agrees that playing games against in-state opponents will generate added excitement for sports fans throughout the state. Days after Van Horn announced he was adding UCA and Arkansas State to the baseball schedule, Arkansas women's basketball Coach Mike Neighbors said his teams will play all of the other Division I teams in the state beginning with the 2021-22 season.

"I'm totally supportive of it," said Riordan, who watched the PT Black team play while on business in Springdale on Wednesday. "The Razorbacks are pretty special, but I really like the idea of playing the other schools in the state."