Old-timey games are easy to learn, just ask your grandparents or great-grandparents by Jerry Butler, Special to the Democrat-Gazette | June 15, 2020 at 2:00 a.m. 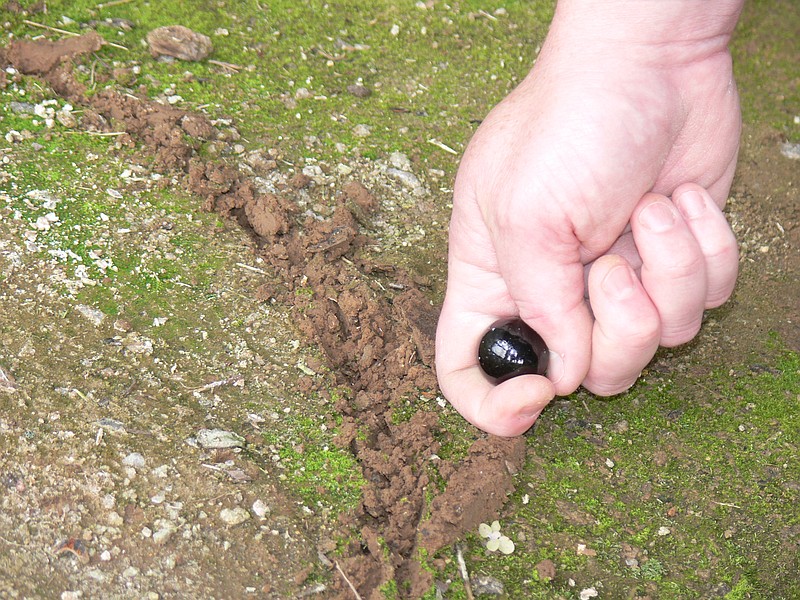 The marble you shoot with is the "taw" or "toy." (Special to the Democrat-Gazette/Jerry Butler)

Rural grammar schoolyards in Arkansas, where many of today's grandparents and great grandparents got their education, were the sites of first-rate fun and colossal competitions.

Most of the games were played at recess and without referees, coaches, official rules or school-supplied athletic equipment. Many games that children played in the 1940s and '50s on school grounds or in their backyards at home have been all but forgotten. Those games were set aside in favor of painstakingly organized youth sport activities or high-tech electronic toys.

Until the pandemic, that is. With current limits on gatherings, organized "activities" for children have moved indoors, delivered through screen devices. A refreshing change of pace might be for grandparents to introduce youngsters to the free-range pastimes they enjoyed when they were boys and girls.

If grandparents can't do this in person because of concerns about the novel coronavirus, they could use modern technology — perhaps during a family teleconference call — to explain or even demonstrate how they used to play. They could find helpful videos to recommend on YouTube.

The ideal opportunity, for many reasons, would be actual visits with the grandchildren.

Pulaski County's Geyer Springs School in 1948 was a four-room building that hosted eight grades and about 80 children. With four teachers, one of whom was the principal, the school had little in the way of physical education programs. It had a small, triangular-shaped grassy playing field to the north, sided by dirt-packed Geyer Springs Road on the east and graveled Mabelvale Pike to the west. The north side of the school building, with only one window, substituted for a softball backstop.

There were no basketball goals for children to shoot hoops. Playing tag, running footraces around the building and trying to leap over a rope stretched between two oaks were the most common competitive sports. Occasionally the rope would be used by teams of kids playing what they called "tug-a-war."

Children took marbles, jacks, pocket-knives and jump-ropes to school for use at recess. They scratched lines in the dirt for hopscotch.

The games "marbles" and "jacks" come from the names of toys used in playing. Back in the day, marbles was a game played mostly by boys, and jacks was favored by girls, although sometimes the competitions were co-ed.

Almost every boy would come to school each spring day with a pocket full of marbles (small colorful glass orbs about three-quarters of an inch in diameter).

A few girls might carry a sock containing a dozen jacks and a small rubber ball that could be shared with other girls. Jacks are metal, three-dimensional, six-pointed, star-shaped objects. Occasionally, a golf ball would be substituted for the small rubber one if jacks was to be played on concrete.

Marbles is usually played in the dirt; jacks is typically played on a sidewalk or porch, but can also be played on a hardwood floor or smooth-top table.

Both are good ways to learn about fair play and sportsmanship, and they promote hand-eye coordination.

Both can be a chance for grandparents to practice sitting on the ground and getting back up.

A long list of variations of play and strategies for winning these games has emerged through the years, but the finer points need not be introduced at first. An engaged child will pick up on these intricacies fast enough without long-winded explanations. 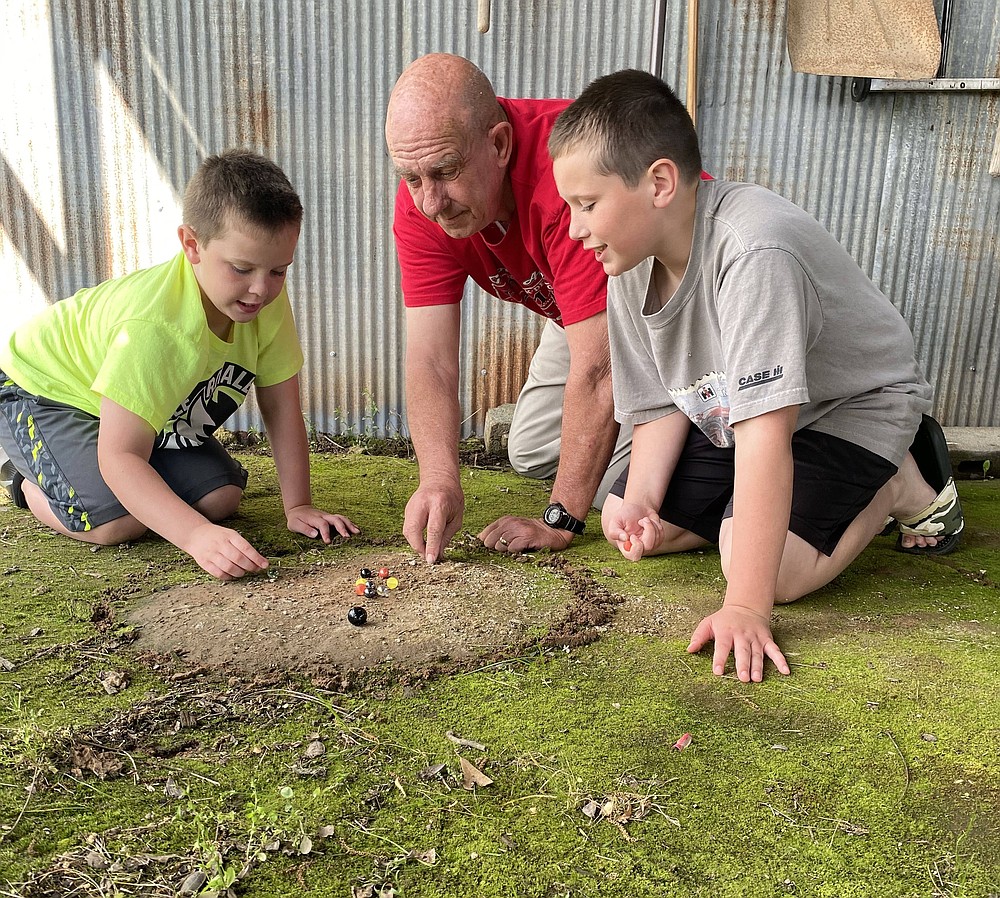 Gene Kinsey of Scott teaches Sawyer and Colin Kinsey to play marbles in June 2020. (Special to the Democrat-Gazette/Jerry Butler)

The rules for marbles differ a bit from school to school and from neighborhood to neighborhood. They can be adjusted so smaller children or more skilled players can compete enjoyably.

Imagine a grandfather who once upon a time attended Geyer Springs teaching two grandsons, Clint and Colton, to shoot marbles. This might be his instruction:

m First, you scratch a circle on the ground with a sharp stick. Then, about three feet away, you scratch a straight line about as long as your arm — that's the "lag line." The size of the circle depends on how good the players are. 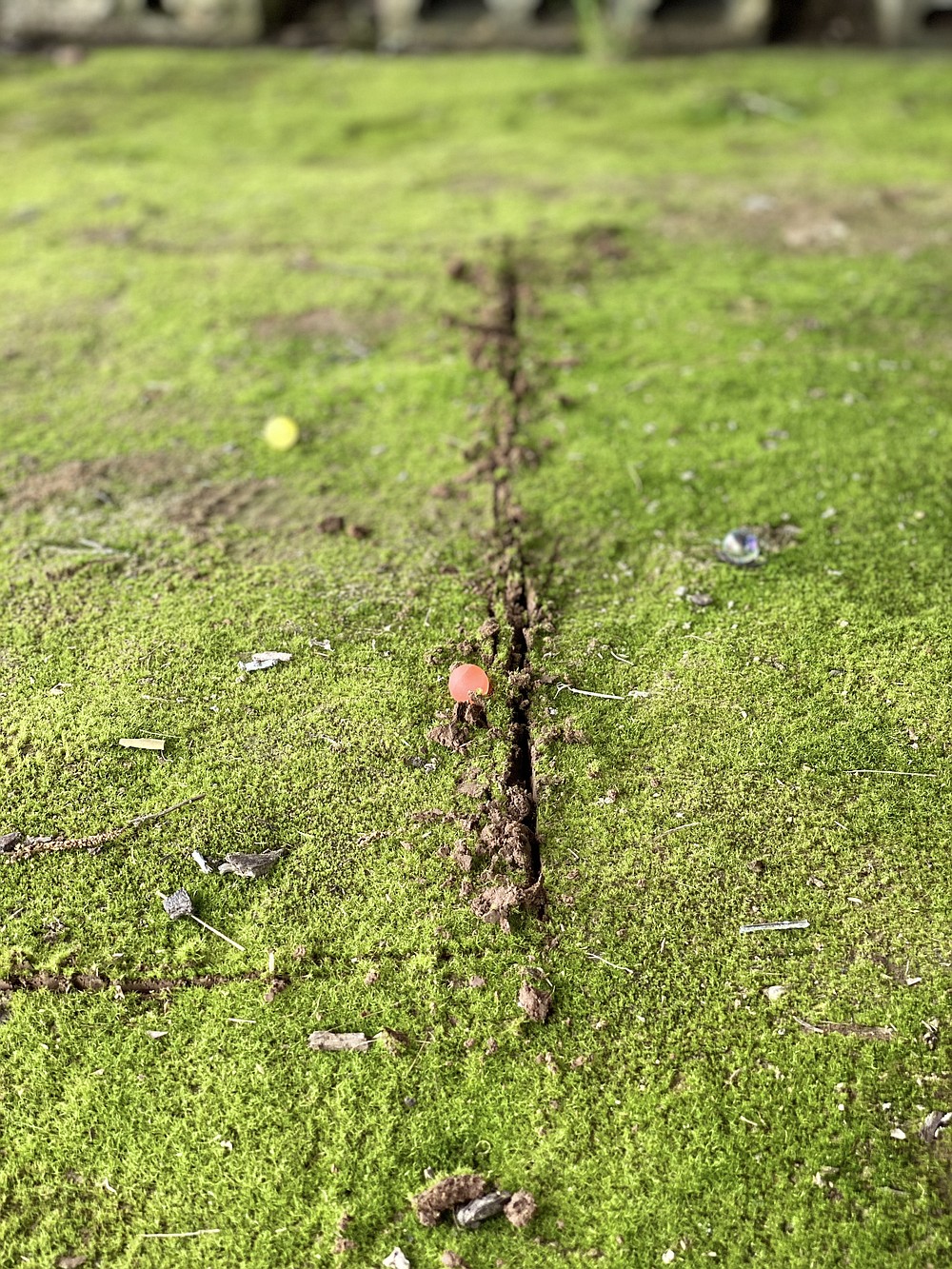 The shooter whose marble, aka "taw," stops rolling closest to the lag line goes first; the one whose taw rests farthest away shoots last. (Special to the Democrat-Gazette/Jerry Butler)

◼️ Next, to see who goes first, shooters (players) stand behind the circle one by one and toss their favorite marble, the one they calls their "taw" or "toy," toward the lag line. The shooter whose taw stops rolling closest to the lag line goes first; the one whose taw rests farthest away shoots last.

◼️ Then, each person in the game puts the same number of marbles inside the circle.

"Since we're just learning, let's each put in five marbles," Grandoc says, "but we could agree to put in as many or few as everyone wanted."

"Clint, since you won the lag, you go first. Squeeze your taw between your index finger and thumbnail and then flick your thumb to shoot your taw toward one of the marbles inside the ring. Keep your knuckle on the ground outside the ring.

"Good! You knocked a marble out of the ring, so you get to put that one in your pocket, and pick up your taw to shoot again. Oops, you missed that time. Now it is Colton's turn.

"Two good shots, Colton! Now you've got two marbles and Clint has one. On that last shot you accidentally put your knuckle down inside the circle and that is called a 'fudge.' When you 'fudge' you lose your turn, so now it's my turn. I'll show you how it's done. 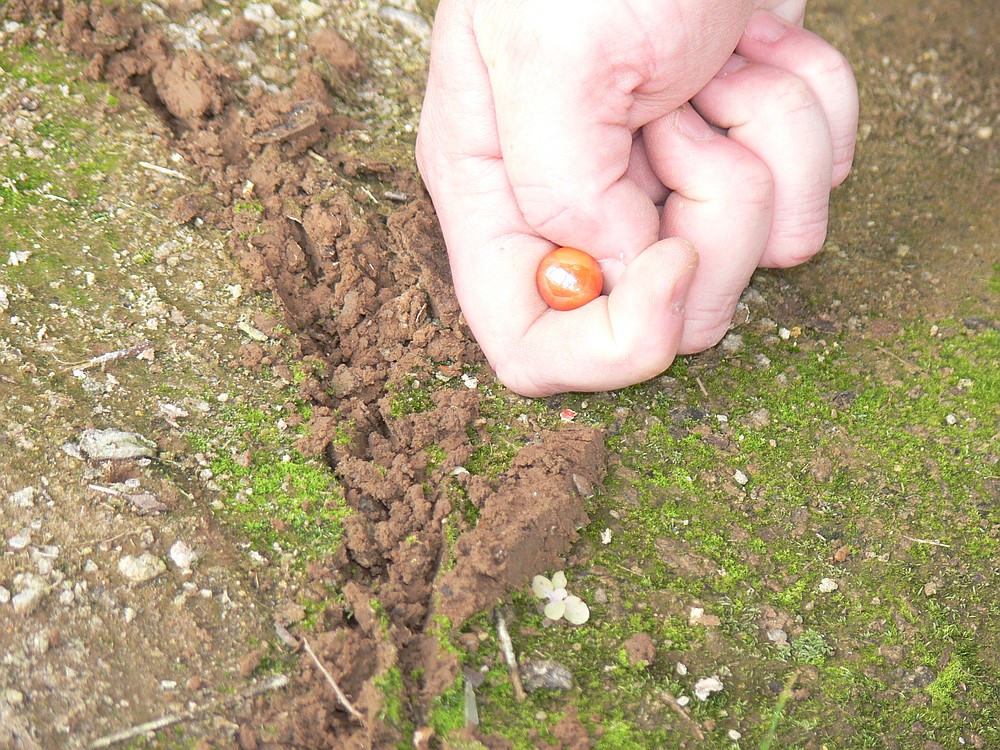 To avoid fudging, hold the marble outside the border of the ring with one knuckle touching the ground. (Special to the Democrat-Gazette/Jerry Butler)

"Whee doggie! It's hard to get these old knees down in the dirt," Grandoc admits. "I'll shoot with one eye closed to keep it even. I don't want to take advantage of you boys."

At this point, Grandoc shoots his taw, misses all the marbles inside the circle, and his taw dribbles slowly across the circle.

"Well, I'm a little rusty," he says. "When I get my knack back you boys are in big trouble."

The game continues with each player shooting in turn until all of the marbles are knocked out of the circle. Final score: Clint 6, Colton 7, Grandoc 2.

"OK," Grandoc says. "That means we all get to keep the marbles we knocked out of the ring. If we had been playing 'just for fun' we would have split the marbles up again as they were at the first of the game and each one of us would get back the five we put in the circle."

"When I was a boy, it was against the school rules to play for keeps, 'cause it's a little bit like gambling. Most of us played for keeps anyway. But I never thought it was right to take away a first-grader's marbles that way.

"Want to play again? Come on, it'll give me a chance to win my marbles back."

The idiom "playing for keeps," so common in our language today to mean "serious about doing a task," has its origins in the game of marbles. So did the idioms "all the marbles," meaning what's at stake in a situation, as well as "lost one's marbles" and "still have one's marbles," relating to mental acuity.

A bag of marbles or a stiff index card with a dozen jacks and a ball attached could be bought at any "five and dime" store in the late 1940s for about 25 cents. They made good birthday gifts. Both are readily found at hobby shops and online today, but be prepared to pay more than a quarter. (Bulk sets of 40 to 500 cat-eye marbles range from $7 to $40 online.)

One place that still has its marbles is the Toy Chest across from Bathhouse Row in downtown Hot Springs. According to Anne Marcus, the store's second-generation owner, jacks and marbles are "standard classics" of toy shops. 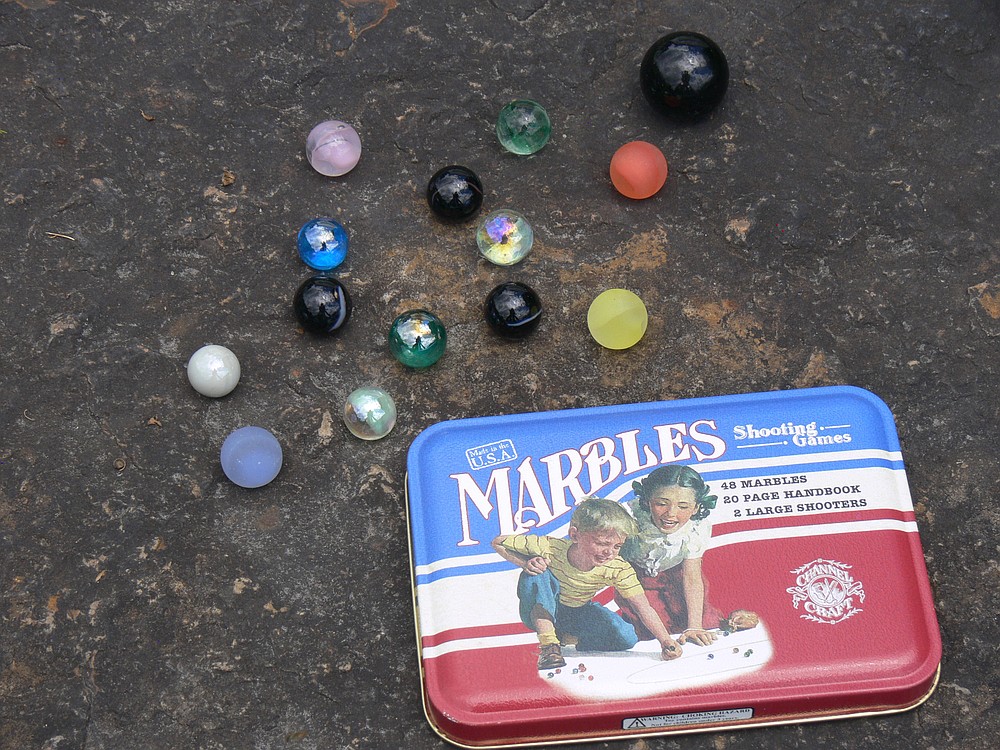 Marbles are sold in decorative tins as heritage playthings at the Toy Chest in Hot Springs. (Special to the Democrat-Gazette/Jerry Butler)

Shelia Benton, a clerk at the Toy Chest, says, "We have a lot of customers coming in here looking for marbles and jacks, and they almost all report that they have looked for them other places and cannot find them." Though Benton is not a grandmother, she added, "Oh! I used to love to play jacks with my friends when I was a girl. If I do say so myself, I was a pretty good player." In two minutes she described the way she played the game as well as its basic rules.

The Toy Chest has a shelf near the cash register where jacks and marbles are on display along with other old-timey games like fiddle-sticks, jump ropes, tops and yo-yos. For $11 you can buy a hard-to-open tin box with 40 marbles or one with 10 metal jacks and a rubber ball (both "made in the USA"). Each box also contains a colorful, 20-page handbook with print so small Grannie will have to use her bifocals to read it.

It is unclear why any child would prefer a handbook 20 pages long to learn a game their grandparent could teach them in less than 10 minutes.