Bettors shift to stocks amid virus 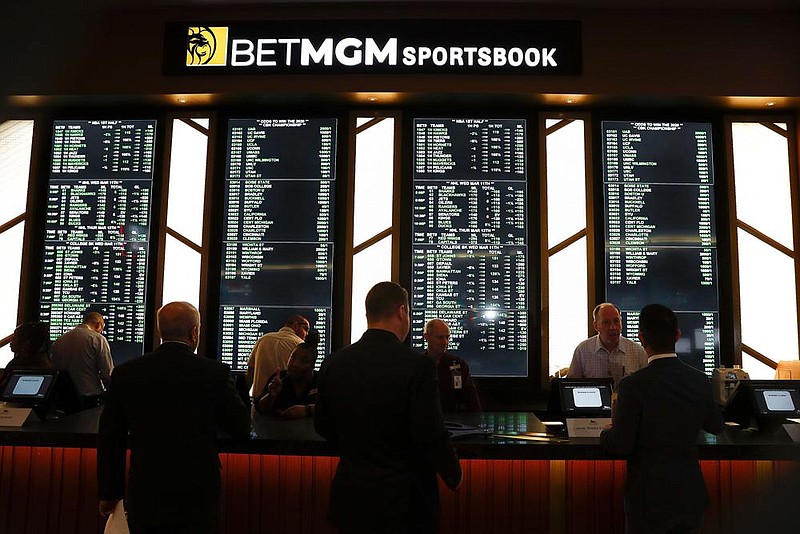 Employees work at the MGM Grand Detroit casino sports book in March. Sports bettors are sitting on a large amount of money as the coronavirus has shut down major sports leagues, and analysts say some of those gamblers are turning to the stock market. (AP/Paul Sancya)

Some Wall Street analysts see people who used to bet on sports as playing a big role in the market's recent surge, which has largely erased its losses for the year.

"There's zero doubt in my mind that it is a factor," said Julian Emanuel, chief equity and derivatives strategist at the brokerage firm BTIG. "Zero doubt."

Millions of small-time investors have opened trading accounts in recent months, a flood of new buyers unlike anything the market had seen in years, just as lockdown orders halted entire sectors of the economy and sent unemployment soaring.

It's not clear how many of the new arrivals are sports bettors, but some are behaving like aggressive gamblers. There has been a jump in small bets in the stock options market, where wagers on the direction of share prices can produce thrilling scores and gut-wrenching losses. And transactions that make little economic sense, like buying up the nearly valueless shares of bankrupt companies, are off the charts.

Even with modest investments, these newcomers can move stock prices, which are typically set by just a sliver of shareholders. On most days, the overwhelming majority of stock investors do nothing, while the buyers and sellers establish the prices. So even a small influx of hyperactive speculators can have a significant effect.

Jim Bianco, president of Bianco Research, a financial market research firm, said gamblers were a small but important segment of those new arrivals, along with video game aficionados.

"Is it as big as what would we refer to as the institutional community?" Bianco asked, referring to mutual funds, exchange-traded funds and professional investors. "Probably not."

But, he added, "it is big enough to matter."

Stymied sports bettors are sitting on a substantial amount of money. Gamblers legally wagered more than $13 billion on sports last year, according to Eilers & Krejcik Gaming, a research and consulting firm, and estimates suggest illegal wagering is 10 times that figure. But betting has collapsed since the outbreak shut down the major sports leagues. Sports betting revenues in March dropped some 60% from February, the firm said. They may have fallen as much as 80% more in April.

"Basically, I needed something to try to gamble on or to try to make some money on," said Sean Moore, a 23-year-old aircraft electrician living in Suisun City, Calif.

With an initial investment of about $1,000, he has experienced all the highs and lows of playing the market in just a few weeks.

Moore's bets on airlines and casino companies surged roughly 60% in about a week.

"I was telling everybody: 'You got to do stocks. Sign up -- it's easy money right now," he said.

But then a bet he made on casino company MGM -- premised on the reopening of Las Vegas after coronavirus restrictions were lifted -- went south.

"It did not go positive like I thought it would," he said. "I thought that was going to be huge with them reopening."

The last time Americans showed any serious appetite for stock-market speculation was the tech-stock frenzy of the late 1990s. Since then, investors have embraced safer options, like set-it-and-forget-it index funds based on the premise that trying to beat the market is a waste of time.

That started to change in earnest last year when a brokerage price war kicked into high gear. Robinhood, fueled by hundreds of millions of dollars in venture capital, had long been offering commission-free online trades. Its established competitors were forced to lower their prices until finally, in October, the giant brokerages -- Charles Schwab, TD Ameritrade, E-Trade, Fidelity and Vanguard -- started eliminating fees, too.

When share prices plummeted in the pandemic, would-be investors rushed in.

TD Ameritrade reported a record 608,000 new funded accounts during the first quarter, more than triple last year's pace. Schwab set a record, too, with 609,000 -- including 280,000 in March alone. E-Trade had 363,000 new accounts, more than double the same period last year and another record. And in early May, Robinhood said it had added more than 3 million accounts this year.

There has been a surge in small investors using option trades to make pure win-or-lose bets on where stock prices will be at a specific time, said Matt Maley, chief market strategist at Miller Tabak, an asset management firm.

"That's another sign that it's these gamblers," he said.