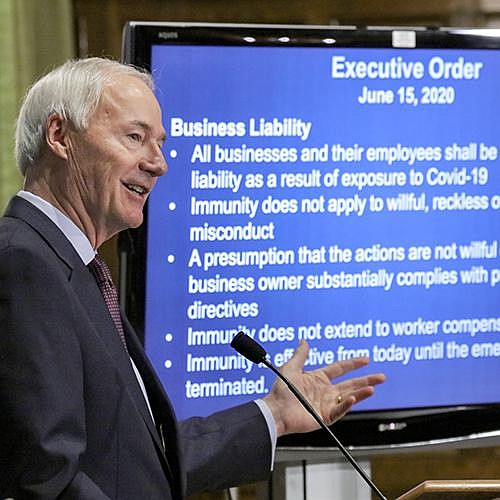 Gov. Asa Hutchinson signed a trio of executive orders on Monday granting businesses and health care workers greater immunity from coronavirus-related lawsuits, while extending workers' compensation benefits to those who fall ill from the virus on the job.

The executive actions -- announced along with 416 new cases of the virus and three additional deaths in Arkansas -- brought to a halt calls for a special session by Republican factions in the Legislature that sought to pass new protections for businesses and employers.

Those calls drew opposition from some Democrats and attorneys who said that such a step could end up shielding businesses that act recklessly and spread the virus to their employees and customers. By signing the orders himself, Hutchinson said he was eliminating the need for lawmakers to risk their health by gathering in a session.

Including an expansion of workers' compensation benefits, meanwhile, eased some of the concerns brought by critics of expanding immunity. Democrats, who have championed expanding those benefits, said the order was not a part of an agreement reached with their GOP counterparts.

"Without the practical recognition that this is not the best time for a special session, I would not be signing these executive orders today," Hutchinson said.

The executive order related to legal immunity for businesses denies protections for those that fail to comply with public health guidelines or that don't act in "good faith" by attempting to meet those standards.

Hutchinson said he hoped the order would encourage compliance by the "few outliers" in the business community that he said were not taking the right precautions.

The Arkansas State Chamber of Commerce on Monday hailed the decision, which it related to the governor's easing of coronavirus-related restrictions on businesses.

"We think this is a really fine move on his part to encourage business owners and managers who are reluctant to reopen and face frivolous lawsuits," said Chamber President Randy Zook.

Democratic lawmakers, while largely opposed to expanding immunity protections, were split on the governor's executive action to sidestep a special session, with some expressing fears that such a session could spiral into other issues. Other critics questioned the constitutionality of granting special immunity from lawsuits.

"It doesn't matter if it is the Legislature, the governor, whomever, no one can take away the rights of the citizens under the [Arkansas] Constitution," said Paul Keith, the president of the Arkansas Bar Association, predicting that the executive order would fail judicial scrutiny.

The decision to extend workers' compensation benefits appeared to enjoy broad support despite some concerns that workers would find it difficult to prove where they contracted the virus. Both the leaders of the Chamber and the Arkansas Bar Association, who are often at loggerheads, praised that action.

All three executive orders went into effect immediately Monday, and they will remain in effect until the governor lifts the emergency declaration imposed at the start of the pandemic, Hutchinson said. The first case was announced March 11, and Hutchinson declared an emergency the same day.

A letter sent to the governor from Senate Republicans last month calling for a special session on business liability carried the signatures of enough lawmakers to pass such legislation in the upper chamber.

However, fewer than half of House lawmakers signed on to a similar letter last week. Republicans control both chambers of the Legislature.

When asked Monday whether there was sufficient support in the House to pass legislation similar to the governor's executive orders, House Speaker Matthew Shepherd of El Dorado said he believed there was, though he clarified that he had not formally polled the chamber's 100 members, or the Republican caucus.

Rep. Austin McCollum of Bentonville, the incoming House majority leader, said he polled the Republican caucus and more than 60 members said they supported expanding immunity for businesses and workers' compensation benefits for employees.

Two Republicans on the House Judiciary Committee -- to which legislation on legal immunity would likely be assigned -- said Monday that they had lingering concerns over legislation that had been drafted for a possible session.

"If it had gone to committee, there would have been a lot of debate over specific language," said Rep. Jimmy Gazaway, R-Paragould.

Gazaway said he appreciated concerns that businesses had about their liability, but he also wanted to ensure that workers had a remedy if they contracted covid-19 at work.

He said the governor's executive order, which exempts workers' compensation claims from the expanded immunity protections, "did a good job at striking a balance."

[Video not showing up above? Click here to watch » https://www.youtube.com/watch?v=CMFmg42uHEM]

The other Republican committee member who expressed concerns, Rep. Doug House, R-North Little Rock, said he also supported the workers' compensation expansion, but had concerns about the constitutionality of the other two orders.

"The way this legislation is intended is to not allow a free pass for bad actors," Hendren said. "We still expect businesses to protect their employees to provide safe workplaces."

Before announcing his executive orders on Monday, the governor met with House Minority Leader Fred Love, D-Little Rock, along with Reps. Tippi McCullough, D-Little Rock, and Denise Garner, D-Fayetteville. The trio raised concerns about the possibility of a special session, two of them said.

Love, despite his and other Democrats' opposition to an expansion of legal immunity for businesses, said he supported the governor's decision to act by executive order in order to forgo a "runaway special session."

"There's a lot of different bills floating around," Love said. "I don't want to go into a session without knowing" what could be added to the call.

Other Democrats, meanwhile, expressed discontent at the move.

Both Hendren and Shepherd said the executive action at least delayed the push for a special session before the Legislature meets in its next regularly scheduled session in January, though neither dismissed the possibility entirely.

There have been 12,917 cases of the virus identified in Arkansas since the outbreak began, officials said Monday. Deaths grew by three since the previous day, to 182.

Speaking at his daily news conference Monday, Hutchinson spoke of what he said was a "temptation to let down our guard" after months of dealing with the virus and its related restrictions on everyday life. On Monday, the state entered Phase 2 of eased restrictions. Many state employees returned to work, and businesses such as restaurants were allowed to have more customers on premises.

"I expect over the next week that the cases will continue to go up," Hutchinson said, predicting an increase in the area of 2,000 cases, based on last week's numbers. "That's every expectation that I have, and so I don't believe that we've reached this second peak, which very well could be our first peak."

The governor did express some optimism in new statistics, including a single-day record for most tests conducted, at 7,063, and two days of decreased positivity rates.

"A low positivity rate with 7,000 tests is a very positive sign," Hutchinson said.

Jose Romero, the Health Department's chief medical officer, said 45 patients remained on ventilators Monday, with no change in number from the previous day.