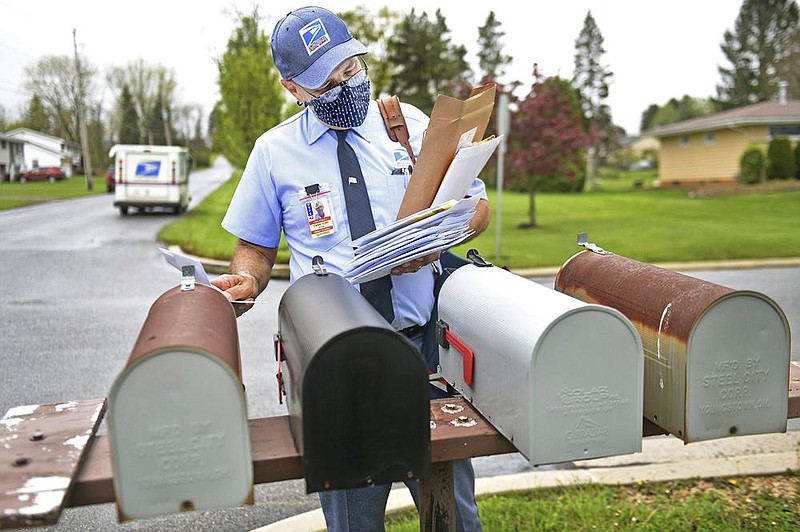 Stan Niton, a U.S. Postal Service letter carrier, sorts through the mail last month on his route in Richland Township, Pa. The Postal Service’s future has been the focus of a growing political battle. (The Tribune-Democrat/Thomas Slusser)

WASHINGTON -- The Senate's top Democrat late Sunday asked the U.S. Postal Service's governing board to turn over communication with the White House about the appointment of new Postmaster General Louis DeJoy, a sign that Democrats plan to press the Trump administration on its plans to consolidate control of the nation's mail service.

Minority Leader Charles Schumer, D-N.Y., wrote to Postal Service Board of Governors Chairman Robert Duncan questioning whether DeJoy, a seasoned businessman and top fundraiser for President Donald Trump who took office Monday, was "selected for reasons of politics or patronage" and how he'll distance himself from the GOP and his vast financial portfolio.

The letter is the latest salvo in a growing political battle over the future of the Postal Service. As the Trump administration has sought to leverage the agency's deteriorating finances to exert more control over its operations, congressional Democrats have pushed back to keep the Postal Service independent. DeJoy is an unusual selection as postmaster general because of his business and political ties -- he ran a former Postal Service contractor that processed mail and maintained postal infrastructure -- but it remains to be seen how he'll run the agency.

Schumer requested correspondence between members of the postal board of governors and representatives of the Trump administration, notes from interviews with job candidates, contracts with the two search firms retained by the governors, and documentation on DeJoy's stance on key issues facing the agency.

Schumer also sought a guarantee that DeJoy would resign as finance chairman for the Republican National Convention and rid his extensive portfolio of any holding that conflicts with his new role.

"His financial interests in companies that have business ties with the Postal Service, as well as his extensive campaign fundraising efforts, also raise concerns regarding whether and how legal prohibitions on his ethical conflicts of interest and partisan political activity as a federal employee will be addressed," Schumer wrote to Duncan, according to a copy of the letter obtained by The Washington Post.

DeJoy spokesman Monty Hagler declined to comment on Schumer's letter, but told The Post that DeJoy resigned his position with the GOP convention effective Friday and "will comply with any financial divestitures that are required."

DeJoy and his wife Aldona Wos, the ambassador-nominee to Canada, have between $30.1 million and $75.3 million in assets in Postal Service competitors or contractors, according to Wos's financial disclosure paperwork filed with the Office of Government Ethics. Postal Service mail processing contractor XPO Logistics -- which acquired DeJoy's company New Breed Logistics in 2014 -- represents the vast majority of those holdings. Their combined stake in competitors UPS and trucking company J.B. Hunt is roughly $265,000.

The North Carolina businessman and major Republican fundraiser succeeds Megan Brennan, whose 34-year career spanned from letter carrier to the agency's first female leader. But the transition comes as the coronavirus pandemic has slashed revenue, and the Trump administration, led by Treasury Secretary Steven Mnuchin, is attempting to pull the independent agency into its sphere of influence.

Mnuchin has sought to leverage a $10 billion emergency loan to extract concessions from the Postal Service's governing board, including the ability to approve the hiring of Brennan's successor, according to several people familiar with negotiations. Board of governors Vice Chairman David Williams resigned over Mnuchin's interference, frustrated that board members had capitulated to Treasury's loan conditions, according to four people familiar with Williams's thinking.

Trump has called the Postal Service "a joke," and said he would not support a financial lifeline unless the agency quadrupled package prices, a move that experts say would devastate its finances by pricing out major package shippers and forcing them to enlarge their own distribution networks. To that end, the Postal Service last month launched a review of its package prices.

He hosted a fundraiser for the president and Republican National Committee in 2017 at his home in Greensboro, N.C., where plates started at $35,000 per couple, according to the Raleigh News & Observer.

Information for this article was contributed by Jeff Stein of The Associated Press.