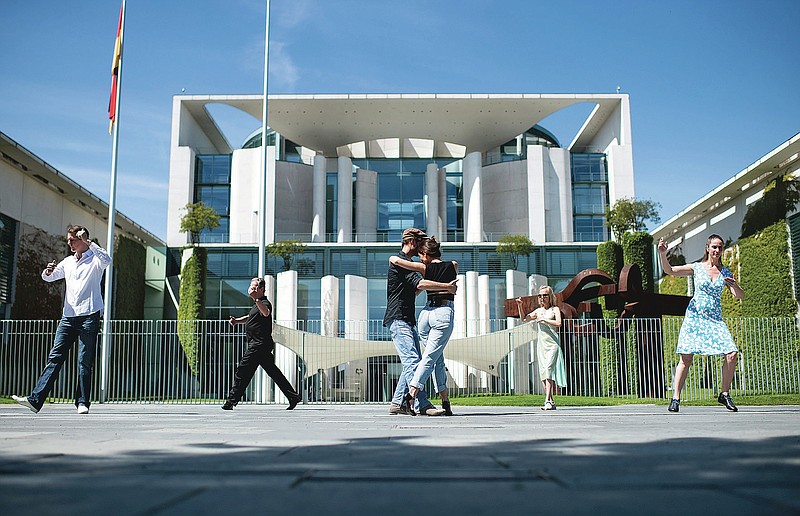 FILE - In this June 3, 2020, file photo, people dance in front of the Chancellery, office of German Chancellor Angela Merkel, in Berlin on the occasion of the action day 'Save the world cultural heritage Tango Argentino in Germany' to point out the problems of tango dancers and dance schools caused by the coronavirus pandemic. Just as summer beckons, Europeans are re-inhabiting their cafes, parks and beaches abandoned during months of lockdown to check the spread of the coronavirus. (Bernd von Jutrczenka/dpa via AP, File)

Just as summer beckons, Europeans are reinhabiting their cafes, parks and beaches abandoned — but not forgotten — during months of lockdown to check the spread of coronavirus.

With borders mostly still closed, people are reclaiming their freedom of movement at home with obvious relief, and some trepidation.

In Brussels, it was like a switch went off, an instant spring bloom. Almost from one day to the next, the city’s Cinquantenaire park was filled with people lured by sunny skies and warm temperatures in the normally rainy European capital. After not being permitted to loiter in the park under lockdown, which started March 13, people spread out blankets and chatted, listened to music and sipped refreshments at the first whiff of freedom. Nearby, the sportier played volleyball, soccer and Frisbee. Very few wore masks — as if to say, after two months of restrictions, we have no fear.

When Madrid’s Retiro park opened following a two-month closing, a Bolivian woman in traditional dress joined a friend for a picture-taking outing. One of the world’s strictest lockdowns went into place in mid-March in Spain, the second country after Italy to be overwhelmed by the coronavirus. While most of the country is entering a so-called Phase 2 — permitting indoor restaurant service and larger gatherings — bigger cities such as Madrid and Barcelona still face more restrictions.

So, when people gathered on a beach in Barcelona, police officers were patrolling to ensure social distancing was observed. Under their gaze, people sunbathed, stretched and waded into the surf. An officer wore a mask and latex gloves; beachgoers had very little obvious protection, perhaps just some SPF.

Everyone knows it takes two to tango — but German rules only allow tango partners to touch if they are real-life partners off the dance floor. Even though dance studios opened Berlin on June 2, Tango lovers must dance alone, or maintain a 5-foot distance from their partners. That simply doesn’t work, as demonstrated June 3 in a peaceful, rhythmic protest outside the German Chancellery.

During a sundown walk in the southern French port city of Marseille, four Arabic-speaking girls pose in matching dresses of satiny bodices and tulle skirts. What better way to celebrate freedom than dressing for the occasion, as a smiling mother guides the little one in silver sandals into place for a photo on March 26. Though French residents were allowed to circulate freely by then, cafes nearby residential streets were free of traffic and cafes were shuttered.

In the capital, Paris, a return to ”real life” was marked a week later by the opening of the famed French institution: the cafe. Tiny round tables that spent months in stacks were spread out at a new generous distance three feet. Celebrating the new era June 2, people gathered in chatty cliques, scooching extra chairs around the tiny tables, with colorful drinks glinting in the slanting sunshine. Masks were not de rigueur.

Italians were the first Europeans to go under lockdown in early March. Measures only began to ease in early May with more freedom of movement locally, followed by a gradual opening of shops, bars and restaurants. One of the first museums to open was the Galleria Borghese in Rome with its famed statuary collection. Without the usual rush of tourists, visitors have been able to take in the art in relative solitude — with just 80 people allowed in at a time.

Greece has been relatively untouched by the virus — with just 180 deaths — and wants to keep it that way. An early lockdown is credited with protecting the population, and the government is only gradually opening to foreign tourists.

That means lonely times for a street performer in central Athens. Walking on stilts, he reached for a flower from a tree in full spring bloom near the National Garden. Only Greeks passed by during a 30-minute period. He said hello and offered a balloon to each passer-by. They returned the greeting — but declined the balloon, a sign perhaps of wariness of the virus.

With borders mostly still closed, people are reclaiming their freedom of movement at home with obvious relief, and some trepidation. 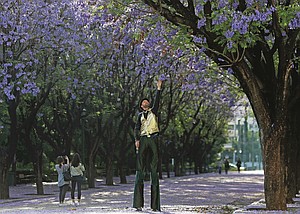 FILE - In this June 3, 2020, file photo, a street performer reaches out to touch flowers on a tree in Zappeion in Athens, Greece. Just as summer beckons, Europeans are re-inhabiting their cafes, parks and beaches abandoned during months of lockdown to check the spread of the coronavirus. (AP Photo/Lefteris Pitarakis, File) 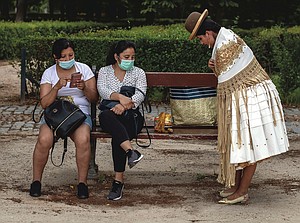 FILE - In this June 1, 2020, file photo, a group of women gather at the Retiro park in Madrid, Spain. Just as summer beckons, Europeans are re-inhabiting their cafes, parks and beaches abandoned during months of lockdown to check the spread of the coronavirus. (AP Photo/Bernat Armangue, File) 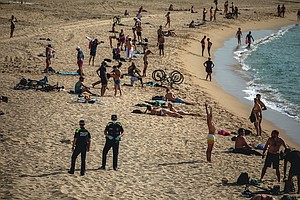 FILE - In this June 3, 2020, file photo, police officers stand at the beach as they ask people to not sit in Barcelona, Spain, during the coronavirus pandemic. Just as summer beckons, Europeans are re-inhabiting their cafes, parks and beaches abandoned during months of lockdown to check the spread of the coronavirus. (AP Photo/Emilio Morenatti, File)