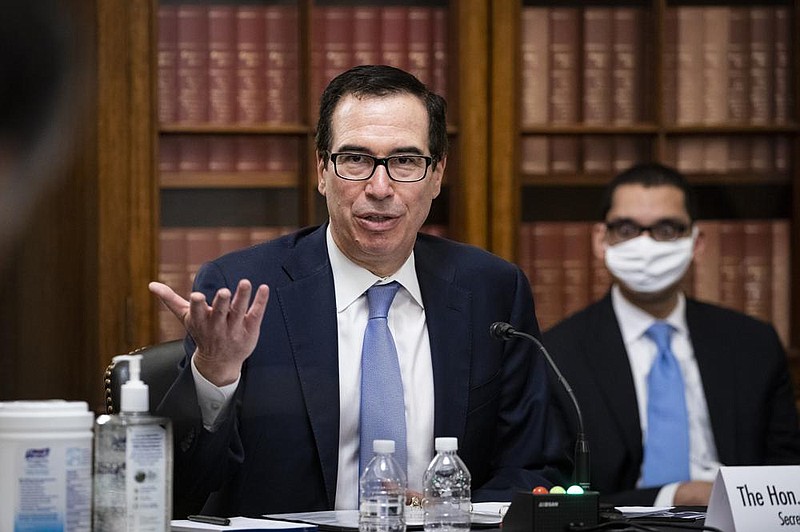 Treasury Secretary Steven Mnuchin, who last week told a Sen- ate committee that the identities of businesses receiving funds through the Paycheck Protection Program would remain secret, said Monday on Twitter that he will discuss adding “proper over- sight” of the program. (AP/Al Drago)

WASHINGTON -- Government watchdogs warned members of Congress last week that previously unknown Trump administration legal decisions could substantially block their ability to oversee more than $1 trillion in spending related to the coronavirus pandemic, amid concerns about the anonymity of companies receiving unprecedented levels of taxpayer funds.

The letter surfaced amid growing bipartisan anger over the administration's decision not to disclose how it is spending hundreds of billions in aid for businesses. On Monday, Treasury Secretary Steven Mnuchin appeared to bow to that pressure, saying he would work with Congress on new oversight measures. But some Democrats have said the White House is not taking disclosure requests seriously enough.

"They seem to be saying one thing while doing exactly the opposite," said Rep. Carolyn Maloney, D-N.Y., chairwoman of the House Oversight Committee. "If the Trump administration is committed to full cooperation and transparency with taxpayer dollars, it is unclear why it is manufacturing legal loopholes to avoid responding to legitimate oversight requests."

According to the previously undisclosed letter, Treasury Department attorneys concluded that the administration is not required to provide the watchdogs with information about the beneficiaries of programs created by the CARES Act's "Division A." That section includes some of the most expensive programs in the coronavirus response efforts, including the administration's bailout for small businesses and nearly $500 billion in loans for corporations.

Mnuchin surprised many lawmakers last week when he announced he would not allow the names of Paycheck Protection Program recipients to become public after the Trump administration had said for months that the data would eventually be disclosed.

In their letter, the inspectors general leading the Pandemic Response Accountability Committee, an independent panel created to oversee implementation of the CARES Act, expressed concern about the administration's legal opinions and their impact on oversight.

"If this interpretation of the CARES Act were correct, it would raise questions about PRAC's authority to conduct oversight of Division A funds," Michael Horowitz and Robert Westbrooks, the acting chairman and executive director of the committee, said in a letter obtained by The Washington Post. "This would present potentially significant transparency and oversight issues because Division A of the CARES Act includes over $1 trillion in funding."

The Treasury Department did not comment on the legal rulings but said the administration was being fully transparent. In a statement, department spokeswoman Monica Crowley said CARES Act spending would be subject to "comprehensive oversight," including multiple inspectors general, a new congressional panel and the independent Government Accountability Office. The Treasury Department is also briefing congressional lawmakers and updating the governmentwide reporting site USASpending.gov.

"The Pandemic Response Accountability Committee's scope under the CARES Act covers other programs that are not already reviewed by these overlapping oversight bodies," Crowley said. "Further duplication of these oversight functions by the PRAC would not increase transparency or oversight. Treasury is fully complying with all of the substantial oversight, transparency, and reporting requirements of the CARES Act."

The oversight bodies referred to by the Treasury Department, including the congressional commission and the GAO, have different mandates and are less likely to identify individual instances of fraud than the inspectors general curtailed by the department's ruling, according to Danielle Brian, executive director of the nonprofit Project on Government Oversight, which tracks government transparency. The administration has updated the government spending website with only a small fraction of CARES Act spending, Brian said.

The new obstacles to the watchdogs' efforts surface as the administration faces a bipartisan backlash on Capitol Hill over its decision not to disclose which businesses are receiving funding under the Paycheck Protection Program, the bailout program for small businesses.

It is unclear whether the law gives the administration the ability to withhold the information.

A key congressional Republican also expressed concern about Treasury's interpretation of the law and its impact on transparency. "American taxpayers have a right to know how their money is being spent," Blair Taylor, a spokesman for Senate Appropriations Committee Chairman Richard Shelby, R-Ala. "Neither the letter nor the spirit of the law limit the accountability committee's purview in that regard. Chairman Shelby is supportive of clarifying that in subsequent legislation, if necessary."

The Trump administration has defended its handling of the bailout program. Mnuchin has said releasing the names of Paycheck Protection Program recipients could compromise proprietary and sensitive business information. In the past, however, Trump administration officials had said they would be disclosing the information. And on Monday, Mnuchin said on Twitter he will be discussing adding "proper oversight" of the program, but it is unclear what he envisions.

President Donald Trump has moved since the earliest days of the rescue package to curb oversight of the CARES Act. Almost immediately after signing the bill, Trump questioned the constitutionality of its requirement that a new special inspector general for pandemic recovery notify Congress immediately if the administration "unreasonably" withholds information requested by investigators.

In early April, Trump also ousted acting Pentagon inspector general Glenn Fine, who was chairman of the federal panel created by Congress to oversee the implementation of the stimulus package.

The $2 trillion CARES Act established the Pandemic Response Accountability Committee to serve as a special watchdog. The committee was granted subpoena power to monitor spending and issue reports and was to operate under the Council of the Inspectors General on Integrity and Efficiency, chaired by Horowitz, the inspector general at the Justice Department. Westbrooks serves as executive director of the committee. The White House's Office of Management and Budget and the Treasury Department suggested alternatives ways of conducting oversight, but the inspectors general rejected the idea, according to their letter.

Separately, a House subcommittee investigating billions of dollars in coronavirus aid is demanding that the Trump administration and some of the nation's largest banks turn over detailed information about companies that applied for and received loans.

The letters ask the banks, Treasury Department and the Small Business Administration for a complete list of applicants for loans, whether they were approved and details on the guidance Treasury has issued. The subcommittee is also asking for communications between the government and the banks.

Democrats say they are not receiving enough information about the loan disbursements and fear the Treasury Department has favored large, well-funded companies over smaller businesses in underserved communities.

Information for this article was contributed by Tom Hamburger, Jeff Stein, Jonathan O'Connell and Aaron Gregg of The Washington Post and by Mary Clare Jalonick and Matthew Daly of The Associated Press.