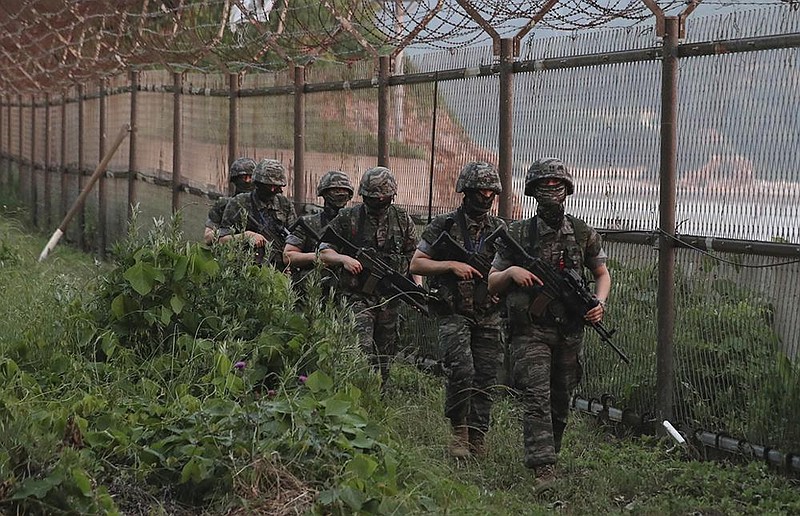 SEOUL, South Korea -- North Korea blew up an inter-Korean liaison office building just north of the heavily armed border with South Korea on Tuesday, and said today that it will redeploy troops to inter-Korean tourism and economic sites near the border.

Although the building was empty and the North had previously signaled its plans to destroy it, the move is still the most provocative act by North Korea since it entered nuclear talks in 2018 after a U.S.-North Korean standoff had many fearing war. It will pose a serious setback to the efforts of liberal South Korean President Moon Jae-in to engage the North.

The North's General Staff said its military units will be deployed at the sites of the Diamond tourism project and the Kaesong industrial complex, both sitting just north of the heavily fortified border. Those sites, once symbols of inter-Korean cooperation, have been shuttered as animosities have been rising for years over North Korea's nuclear program.

The North said that it also will resume military exercises and reestablish guard posts in front-line areas and fly propaganda balloons toward South Korea. These steps mean that North Korea will nullify a 2018 deal with South Korea aimed at lowering military tensions at border areas.

She said Moon had offered to dispatch his national security director, Chung Eui-yong, and spy chief Suh Hun at the earliest possible date that North Korea would want. Kim Yo Jong, has spearheaded the North's recent rhetoric against South Korea, called Moon's offer "unrealistic" and "nonsensical" and said South Korea must pay the price for its failure to stop activists from sending anti-Pyongyang leaflets toward North Korea.

North Korea's official Korean Central News Agency said the country destroyed the office in a "terrific explosion" because its "enraged people" were determined to "force [the] human scum, and those who have sheltered the scum, to pay dearly for their crimes," apparently referring to North Korean defectors living in South Korea who for years have floated anti-Pyongyang leaflets across the border.

South Korean border guards heard the explosion and then saw smoke rising from Kaesong, the North Korean town where the building sat. The building appeared to be blown completely apart in a blast so powerful that windows in nearby buildings were shattered, according to video footage from a South Korean surveillance camera on the border.

No South Koreans had worked at the office since January, when it was closed because of the coronavirus pandemic.

South Korea issued a statement expressing "strong regret" over the destruction of the building, warning of a stern response if North Korea takes additional steps that aggravate tensions.

The statement, issued after an emergency National Security Council meeting, said the demolition is "an act that betrays hopes for an improvement in South-North Korean relations and the establishment of peace on the Korean Peninsula."

The South's vice unification minister, Suh Ho, who was Seoul's top official at the liaison office, called the demolition an "unprecedentedly senseless act" that shocked "not only our people, but the whole world."

The North said last week that it was cutting off all government and military communication channels with the South while threatening to abandon bilateral peace agreements reached during Kim Jong Un's three summits with Moon in 2018.

U.N. Secretary-General Antonio Guterres expressed concern at the latest developments and called for "the resumption of inter-Korean dialogue leading to peaceful solutions that benefit peace and prosperity for all," U.N. associate spokesperson Eri Kaneko said in New York.

North Korea has a history of taking highly visual symbolic steps for political gains. It invited foreign journalists to watch the detonation of its underground nuclear testing tunnels in 2018 and the demolition of a cooling tower at its main nuclear complex in 2008. Both events were an attempt by the North to show it was serious about denuclearization after rampant outside skepticism about its commitment.

"It's hard to see how such behavior will help the Kim regime get what it wants from the world, but clearly such images will be used for domestic propaganda," said Leif-Eric Easley, a professor at Ewha University in Seoul.

The Koreas' neighbors voiced concerns over Tuesday's demolition. Japanese Prime Minister Shinzo Abe said he hopes tensions between the Koreas will not escalate further, adding that Japan will cooperate closely with Seoul and Washington while analyzing the development.

In China, the North's major diplomatic ally, Foreign Ministry spokesman Zhao Lijian said that "we always hope that the Korean Peninsula will maintain peace and stability."

Inter-Korean relations have been strained since the breakdown of a second summit between Kim and President Donald Trump in Vietnam in early 2019. The summit fell apart because of disputes over how much sanctions relief the North should get in return for Kim's dismantling of his main nuclear complex, which was seen as a limited denuclearization measure.

The North Korean troop deployment today involves areas near the border that have been demilitarized since 2000, when the two Koreas' leaders met for the first time.

Under those agreements, the North ​withdrew some of its frontier military units to make way for roads linking South Korea to Diamond Mountain -- a resort destination in the North, which became the site of an experiment in inter-Korean tourism -- and to Kaesong, where the two Koreas jointly operated an industrial park years before the liaison office opened.

Both projects were part of the South's "Sunshine Policy" of improving ties through economic cooperation, which led to the 2000 meeting between Kim's father, Kim Jong Il, and then-President Kim Dae-jung of the South. But that goodwill soured over the years as North Korea continued to develop a nuclear arsenal, and the two projects were eventually shut down.

In 2018, Kim Jong Un and Moon agreed to stop cross-border propaganda, and they set a goal of resuming the Kaesong industrial park and the Diamond Mountain project. ​They also removed more troops from the border area, shutting down some of the guard posts that both Koreas maintain within the Demilitarized Zone that separates them.

But acrimony has returned in recent months. Kim's diplomacy with Trump collapsed last year, frustrating his hopes of winning relief from tough international sanctions imposed on the North over its nuclear weapons.

He has since stepped up pressure on the South to move ahead with the Kaesong and Diamond Mountain ventures, both of which had generated for the North much-needed hard currency.

Under the 2018 agreements, however, those joint projects were to be resumed only as part of a broader deal to denuclearize the North. The South's refusal to proceed with them regardless has led to increasingly harsh rhetoric from the North, whose economy, already suffering under the sanctions, has been damaged further by the coronavirus pandemic.

On Saturday, Kim Yo Jong, Kim's sister, said the North should no longer "trust the trite language" coming from Moon's government. 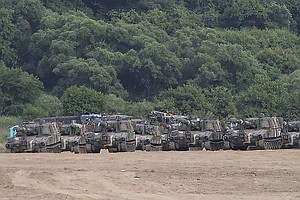 "I feel it is high time to surely break with the South Korean authorities​," she said.

On Monday, Moon marked the 20th anniversary of the Koreas' first summit meeting by saying that the road to peace was​ "slow" and "tortuous." He urged Kim Jong Un "not to reverse the promise of peace he and I made before 80 million Koreans."

Information for this article was contributed by Kim Tong-Hyung and Hyung-Jin Kim of The Associated Press; and by Choe Sang-Hun of The New York Times.