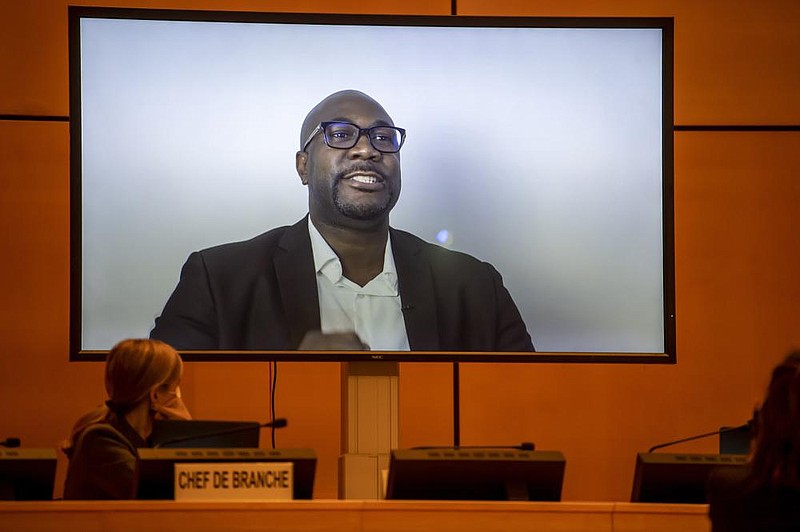 “I am my brother’s keeper,” Philonise Floyd said Wednesday in a video message to the Human Rights Council in Geneva. “You in the United Nations are your brothers’ and sisters’ keepers in America — and you have the power to help us get justice for my brother George Floyd.” (AP/Keystone/Martial Trezzini)

GENEVA -- The brother of George Floyd made a heartfelt plea on Wednesday to the U.N.'s top human-rights body, urging it to launch intense international scrutiny of systemic racism, the killing of black people by police and violence against protesters in the United States.

Philonise Floyd, in a video message to the Human Rights Council, backed a call by dozens of African countries hoping to create a Commission of Inquiry -- the council's most powerful tool of scrutiny -- to report on racism and violence against protesters by police in the U.S.

Floyd joined the U.N. human-rights chief, the council's independent rapporteur on racism, and many diplomats at an "urgent debate" championed by the Africa Group in the wake of his brother's death. George Floyd, a black man, died after a white Minneapolis police officer pressed a knee into his neck for several minutes as he pleaded for air and eventually stopped moving.

The council has regularly addressed police brutality and racial profiling in the United States, and they were major themes during its last turn five years ago for a regular review of its human-rights record that all countries go through at the council.

Russia's envoy accused the United States of ignoring racism for decades, and derided a "calamitous state of human rights" in the U.S.

China's representative said his country was "saddened and shocked" by Floyd's death, saying it wasn't an isolated case and one that exposed "chronic and deep-rooted racial discrimination" in the United States.

The U.S. ambassador in Geneva, Andrew Bremberg -- in a statement ahead of the debate -- acknowledged "shortcomings" in the United States including racial discrimination and insisted the government was "transparent" about dealing with it.

President Donald Trump has condemned the actions of police officers who were linked to George Floyd's death, and on Tuesday signed an executive order on police reform.

"The United States recognizes and is committed to addressing its shortcomings, including racial discrimination, and injustices that stem from such discrimination, that persist in our society," said Bremberg. "Every democracy faces challenges -- the difference is how we deal with them."

The executive order, Bremberg said in a statement, was "an example of how transparent and responsive our government leaders are in holding violators accountable for their actions and reforming our own system."

The U.N.-backed council, which counts 47 member states, was also discussing a draft resolution floated by the Africa Group that singles out the United States. The text calls for a commission of inquiry to examine and report on "systemic racism" and abuses against "Africans and of people of African descent" in the U.S. and beyond.

Such work would be carried out "with a view to bringing perpetrators to justice," the text states.

Calling the U.S. the world's "leading advocate" for human rights, Bremberg said: "We are not above scrutiny; however, any HRC [Human Rights Council] resolution on this topic that calls out countries by name should be inclusive, noting the many countries where racism is a problem."

"We call upon all governments to demonstrate the same level of transparency and accountability that the U.S. and our democratic partners practice," Bremberg said, making veiled references to Iran and China over their alleged shortcomings when it comes to human rights.

The U.S. has not participated in any of the thrice-yearly council sessions since the Trump administration pulled out in June 2018, citing an alleged anti-Israel bias and acceptance of rights-abusing autocratic states as members. The United States has a right to respond as a "concerned country" in the debate, but was not expected to use it -- at least not in person.

The debate was expected to continue today, when a vote on the African resolution could come up.