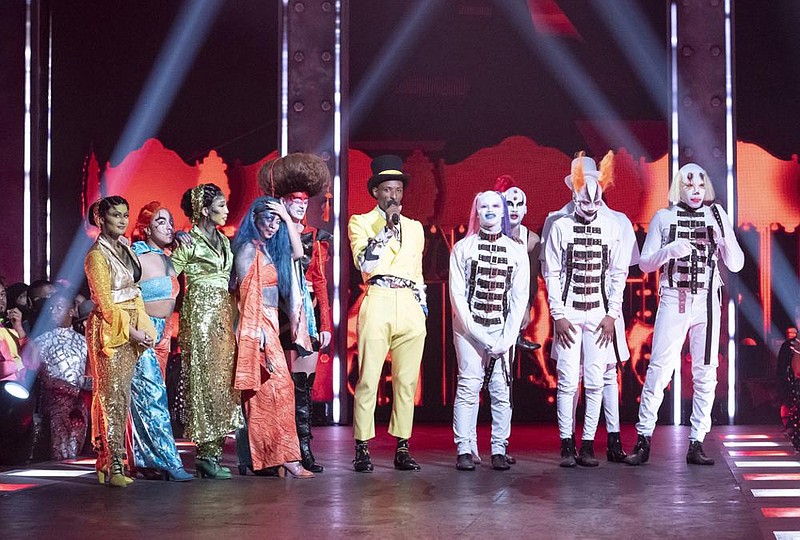 Dashaun Wesley, center, is the ring leader for contestants on the series Legendary. The series lifts the veil off the underground world of ballroom culture, in which historically black and Latino LGBT youths compete in elaborate performances on a runway. (HBO Max via AP)

LOS ANGELES — FX's fictionalized hit show Pose introduced many to the underground world of ballroom culture, in which historically black and Latino LGBT youths compete in elaborate performances on a runway.

Now, Legendary on HBO Max is serving up real ballroom "battles" to the mainstream, with competitors in eight "houses" vying to be declared the best and take home $100,000. Judging the competition are recording artist Megan Thee Stallion, actress and activist Jameela Jamil, stylist and TV personality Law Roach, and ballroom legend Leiomy Maldonado.

During battles, competitors wear elaborate costumes, makeup and wigs. They vogue, dance like acrobats and spin like ice-skaters.

"It's like if ballet and break-dancing had a baby," said Jamil, best known for her role on The Good Place.

But Legendary is not just about being fierce. It's about overcoming.

In the first episode, one of the competitors opens up about being ostracized from his family when he came out, a sad truth for many who turned to the ballroom community for acceptance.

"Growing up I already knew my mother wasn't accepting of my sexuality," Xa'Pariis Ebony says. "When I did decide to finally come out to her, I was put out. Like, I had to sleep in parks sometimes. But ballroom just really gave me a family. It really did teach me to be comfortable with who I am."

The ballroom community not only offers a place where LGBT youth of color feel welcome but also powerful, Jamil said.

"These are people who are living a lifestyle that so much of our ignorant society shuns," she said. "The fact that they are doing it as boldly, as loudly, as colorfully as possible, is so empowering."

Although widely viewed as a big step by the ballroom community, Legendary has been criticized for allowing Jamil and Megan Thee Stallion to be judges, as opposed to others who are a part of the community.

Jamil, in particular, was singled out when HBO sent out a news release about the show that incorrectly identified her as the emcee. The competition's emcee is Dashaun Wesley, a ballroom legend.

The backlash grew so much that Jamil worried that too much attention was on the controversy.

"I said to the show, I was like, 'Do you think it would be better if I leave?'" she said. "And it was the ballroom community and it was Dashaun and Leiomy who got straight on the phone with me and they were like, 'You're not going anywhere.' And the contestants like, grabbed one of the producers and were like, 'Don't let her leave,' and it was because they don't believe in ostracizing people. They believe in inclusion and not exclusion."

And that, she said, was her "first big lesson of really experiencing the heart of ballroom."

She defended herself and Megan as judges, saying the show needed Hollywood names to get the proper attention it deserves.

The show's message of acceptance is so strong, one of the eight houses competing is comprised entirely of cis women. (Cis is a term for people whose gender identity matches their sex assigned at birth.)

Wesley said he was involved in making that decision, which also has faced criticism among the ballroom community.

The message: It doesn't matter who you are as long as you can bring it to the runway.

Those involved with the show say they hope introducing ballroom culture to a broader audience leads to more understanding and acceptance of LGBT culture.

"There are two different types of people that I'm really looking forward seeing (the show)," Jamil said. "One, are the young kids who might be queer or trans themselves, who haven't seen themselves reflected back on mainstream television being glamorized and glorified. I think it's important for them to know that like, 'Oh, maybe not in my hometown, but somewhere there is a place for me and there's a community for me where I would be accepted.'"

Next, she said she can't wait for parents of such children and "people who maybe feared this culture or thought there was something wrong or dirty or shameful about it" to see the show.

"They can see the beauty and the joy of it," Jamil said. "And, you know, I think that a lot of ignorance and bigotry just comes from fear of the unknown. And so let's get to know these people."