Artemis is the movie most foul 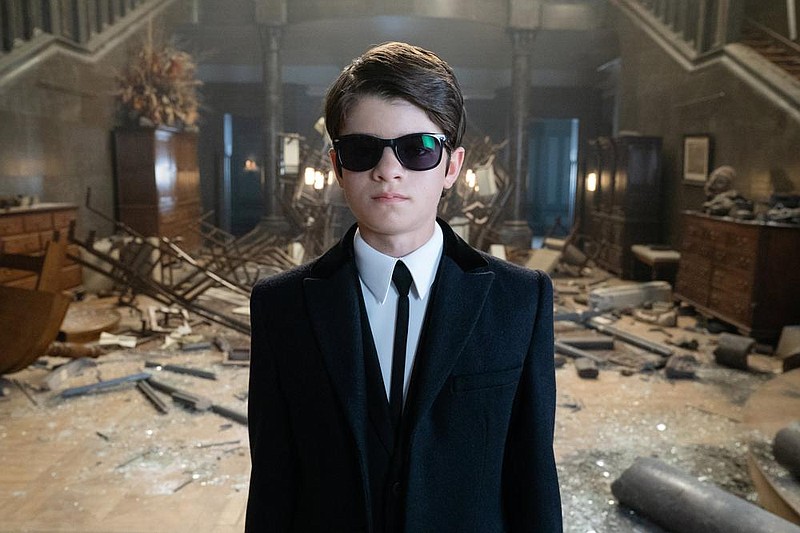 Young Ferdia Shaw, who plays the title character in Kenneth Branagh’s often-delayed Artemis Fowl, might recover from having starred in this misbegotten Disney Plus fantasy feature, but it could take years.

With most reviews the writer will try to keep his or her real thoughts on the movie a secret buried at least a few paragraphs in, so readers won't just skim the top and close the tab. But with a headline like mine, that's simply not possible.

Secret's out that I think Artemis Fowl is a pile of hot steaming garbage. All I can do now is try to dip my brush into cow dung and paint as vivid a picture as possible. That way I can accurately relay just how truly awful it is. Because nobody should be forced to watch this movie. Doing so would violate treaties and protocols established during the Geneva Conventions.

Before I dive into how bad Artemis Fowl is, allow me to establish my credentials as a professional viewer of god-awful cinema.

In high school and college, my friends and I would spend our weekends picking terrible movies and watching them for fun, just to see how much we could endure. I've witnessed all four sequels to Highlander. Each grows progressively worse until your eyes bleed about halfway through Highlander: The Source. That movie was so bad, Syfy turned down a planned trilogy centered around it. Syfy, as in, the folks who made Sharknado and Raptor Island, looked at it and said, "Hard pass."

I've watched The Room multiple times, Catwoman, Superman IV: The Quest for Peace, Superbabies: Baby Geniuses 2, Meet the Spartans, Alien 3, and the first three Left Behind movies (not the one with Nicolas Cage). I've seen some stuff. And Artemis Fowl is right up there with the worst of them.

It's hard to imagine someone taking such beloved source material, running it through a meat grinder, and then dumping out such a terrible movie. Or it would be, if I hadn't already seen what M. Night Shyamalan did to Avatar: The Last Airbender. Thank God I didn't read the Artemis Fowl books first, or I might actually be dead right now. Not having expectations might have been all that saved me.

I can only imagine how author Eoin Colfer feels right now, having watched his baby shredded and regurgitated in such a way. When I see such dire adaptations of young adult novels, in a way, it makes me glad nobody has ever made an Animorphs movie.

The story I was promised with this series was about a young criminal mastermind who interacted with magical creatures and went gallivanting around the world on secret missions. I witnessed none of that in this movie.

The plot and central characters revolve pretty heavily around fairies, which should be exciting. Fae are among some of the most popular mythological creatures to involve in fiction, and unlike vampires and werewolves, they've not worn out their welcome. I've read good stories involving the fae, from Tithe: A Modern Faerie Tale to The Dresden Files. And this movie, which had such great opportunity with these magical beings, reduces their role and significance to that of Christmas elves in The Santa Clause.

And it's not just fae. The movie has dwarfs, a centaur, a troll, goblins and an entire magical city deep at the center of the earth. Artemis Fowl somehow finds a way to suck the fun, magic, and mysteriousness from these creatures and give me a group of characters that wouldn't even be interesting by Disney Channel original movie standards.

That's what this movie felt like, a Disney Channel original movie with a bigger budget. But even that isn't a fair comparison because some Disney Channel movies were actually entertaining and knew what they were supposed to be, like The Thirteenth Year or Zenon: Girl of the 21st Century.

What's most spectacular to me about Artemis Fowl is how it somehow finds a way to squander everything. Magical creatures? They look TERRIBLE. This movie had a $125 million budget. What was all that cash spent on? The ears on every fairy look worse than Spock's ears in the first season of Star Trek. The troll looks like a home economics class designed a Halloween decoration. And for a film that's supposedly set in Ireland, there's not even a hint of gorgeous Ireland scenery!

Then there's Judi Dench, an Oscar-winning actress with more theatrical talent in her pinky finger than just about any other human on the planet possesses in their entire body. She's M from James Bond for crying out loud. And they brought her into this film to do nothing but grunt lines for 90 minutes. What a frustrating experience for her and the audience.

At least the actors in this movie can say they gave as good a performance as Judi Dench did, because they were all terrible. A criminal mastermind is supposed to be charming and charismatic. How hard could it have been to find a charming boy in the age range of 12-15? They failed miserably. Ferdia Shaw, who plays the main hero, might as well have been replaced by the actor for Plank from Ed, Edd, n Eddy.

Lara McDonnell, who plays the movie's main fairy lead, just shouted all her lines, probably in hopes of making the recording go faster so she could get home to cash her check and be done with this abomination of a movie. I can't really say much about the movie's villain. She had such little screen time, I constantly forgot the story even had an antagonist.

Everyone in this movie looked and sounded like they were ready to go home in every scene. There are some stretches of the movie where the actors just give their lines as quickly as possible, like the director just used test takes for placeholders while editing and then forgot to remove them.

The only actor who gave an OK performance was Josh Gad, who channeled every ounce of Jack Black he could to play Mulch Diggums. I can at least credit Gad with making me laugh exactly two times in the film.

Artemis Fowl is supposed to have this grand magic story, but the pacing and writing throughout the film are atrocious. Most of the movie takes place inside a single house. Oh what magic there be! And the way the movie just bounces from one scene to the next without any solid explanation leaves me baffled. The chronology is so muddled, that half the time I have no idea what's going on. Who are we fighting? What are we trying to accomplish? No clue.

The movie dumped so much exposition into my lap via cliches such as news footage, characters with the sole purpose of divulging background information, and Josh Gad constantly popping in to narrate to the point I wanted to scream, "Butt out!" at my television screen.

And yet, despite dumping so much background information onto the audience, the movie never once takes time to explain important details like how magic works, what the Macguffin does, who or what the villain's motivation is, how authorities suddenly know Artemis Fowl and his father are criminal masterminds, how the fairies came to be and what their relationship with mankind is, how the fairies can stop time, and so much more.

It's almost impressive really, how the movie can simultaneously flood me with exposition and not explain the most important parts of the setting and story. If the movie wins an award, it'll be for managing that feat. Picture a scientist working for years to develop lightspeed travel, but somewhere along the way, they merely manage to invent the perfect flavor of butter for popcorn. That's not what they set out to do, but it's kind of impressive they managed it.

It's very clear to me nobody wanted to keep this movie going, from Colin Farrell to Nonso Anozie. I probably put more effort into writing this critique than Conor McPherson and Hamish McColl put into writing the screenplay. If you want the biggest example of this, the movie kills off one character. One, in the entire flick. And the writers couldn't even commit to that. The death was already pointless, but somehow it sinks into a negative value of pointless when inexplicable magic is used to resurrect the character.

How did the magic work? Who knows. One moment, the fairies "jammed" all the magic in the house, apparently showing that magic is about as reliable as a cellphone signal on Scenic Highway 7, and the next second, the dead character glows a little bit and returns to life.

Never before had I been on the edge of my seat for a character's return. Not even the resurrection of Jon Snow was as exciting to me (for the love of God, please detect the sarcasm of those two sentences).

If this movie had one redeeming quality, and just a tiny one at that, it's the running time. At 95 minutes, the movie pretty much just runs up, screams in your face about geniuses and fairies, then vanishes, leaving you to understand or remember very little of it.

There are bad movies that are so terrible, you enjoy laughing at them, like Highlander 2. Then there are flicks like Artemis Fowl, which are bad, bland and boring. Nobody committed here, and it shows. The movie couldn't even provide a final showdown between the hero and villain, leaving its ultimate conflict resolution feeling cheap and unearned, like everything else in this uninspired heap of cinematic ashes.