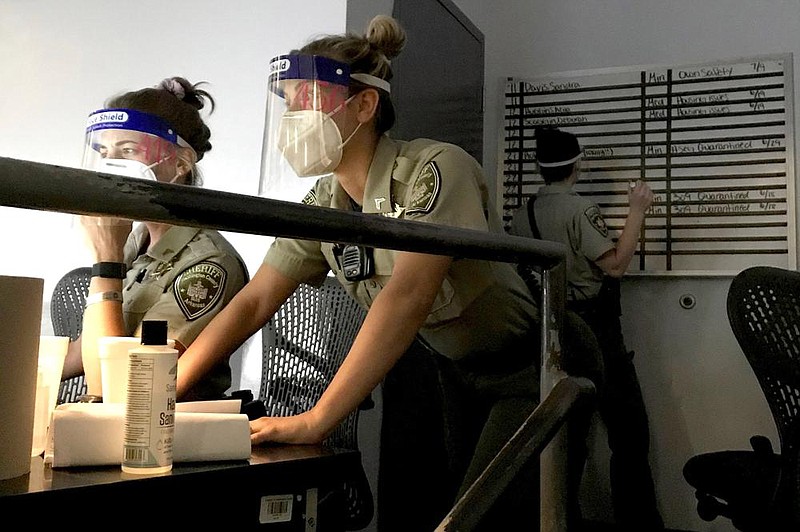 FAYETTEVILLE -- In Benton County, 164 inmates tested positive for coronavirus, but only one had symptoms and is hospitalized while the others are asymptomatic, Sheriff Shawn Holloway said at a Thursday afternoon news conference.

The hospitalized inmate has underlying conditions, but Holloway said he couldn't reveal the medical issues.

The asymptomatic inmates, who are showing no symptoms of the virus, are being held together in an area of the jail.

Shannon Jenkins, spokeswoman for the Sheriff's Office, said the jail has been averaging about 400 inmates per day. She said tests were also done on the other inmates and those tests were negative.

Holloway said they're waiting on the results of 50 inmates who had to be tested again.

Holloway said people booked into jail will be held in isolation to prevent the spread of the virus.

He said the Arkansas Health Department will contact individuals who have been released from the jail.

The asymptomatic inmates can still post their bonds and be released from custody, Holloway said.

No additional detainees in the Washington County jail have tested positive for the virus that causes covid-19 as of Thursday afternoon, officials said.

Kelly Cantrell, public information officer for the Washington County Sheriff's Office, said all of the detainees and most of the staff have been tested but not all of the test results have been returned.

Cantrell said the office was alerted Tuesday some detainees tested positive for the virus. According to a post on the Sheriff's Office Facebook page, Karas Correctional Health, the medical services provider for the jail, obtained some 15-minute covid-19 test kits and used them on 40 detainees being held in quarantine before being released into the general population. Several of the 15-minute tests showed a positive result and the Sheriff's Office contacted the Arkansas Health Department, which recommended testing all detainees and staff.

The Health Department tests on the 40 detainees in the first group to be tested showed 16 were positive, Cantrell said Thursday. The number of positive tests was initially put at 15 Wednesday, but Cantrell said one positive result came in later.

As of Thursday afternoon, Cantrell said, results were negative on 133 detainees who were tested. The jail population on Thursday was 385. Results for 94 employees have all been negative. Cantrell said all of the test results should be in within 24 to 48 hours.

Cantrell said no one associated with Washington County's jail has been hospitalized due to the virus. She said all detainees with positive tests are being held in a quarantine area, away from the other areas designated for new inmates.

With the presence of the coronavirus in the jail, Cantrell said the staff will continue booking detainees with the procedures already in place, with one added precaution.

"We will continue with the protocol per [Centers for Disease Control and Prevention] guidelines with one added procedure," Cantrell said "If a detainee shows any signs or symptoms per CDC guidelines, or is at high risk per questions at intake prior to entering the detention facility, they will receive the 15-minute rapid test and await results before entering the detention facility."

Cantrell said the Sheriff's Office will continue to accept prisoners under the current limitations, with area law enforcement agencies being asked to take people to the jail only if there are no other options.

Cantrell said detainees testing positive and able to pay the bond set for their release will be allowed to leave but the Health Department will be notified before their release.

Also Thursday, it was reported an inmate at the state Department of Correction work release facility in Springdale tested positive for the coronavirus.

"I'm aware of one positive case," Murphy said. "I was told of that last night. I get a daily update from the facility but I haven't heard more on that yet."

Murphy said there are 92 inmates housed at the facility but not all of them have work assignments.

Holloway said all Benton County inmates are required to wear masks when they are moved through the facility. Holloway said he ordered bandannas for inmates to wear because the mask supply was getting low and would appreciate any donations of masks.

He said inmates aren't being charged for any medical issues related to covid-19.

The temperature of inmates is being checked twice a day and the Sheriff's Office is following guidelines from the CDC and the state Health Department.

Holloway said the Sheriff's Office began working in March with prosecutors and judges to reduce the jail population.

The jail had about 700 inmates in March and Thursday's population was 379.

Cynthia Camp went to Holloway's news conference because she was concerned for her son, Jeffery Watkins, and other inmates. Camp said her son and other inmates complained to her about the conditions in the jail and they aren't receiving the proper care.

Camp said she wants the Sheriff's Office to be more transparent about the conditions in the jail and the treatment of inmates.

The number of covid-19 cases in Arkansas reached 13,928 on Thursday, a 322 increase over Wednesday, Gov. Asa Hutchinson announced. The death toll from the virus has reached 208, with 11 deaths being reported since Wednesday. Hutchinson said the emergency declaration put in place earlier in the pandemic will be extended 45 days. The virus was first identified in Arkansas in early March and the first confirmed deaths were reported March 24. 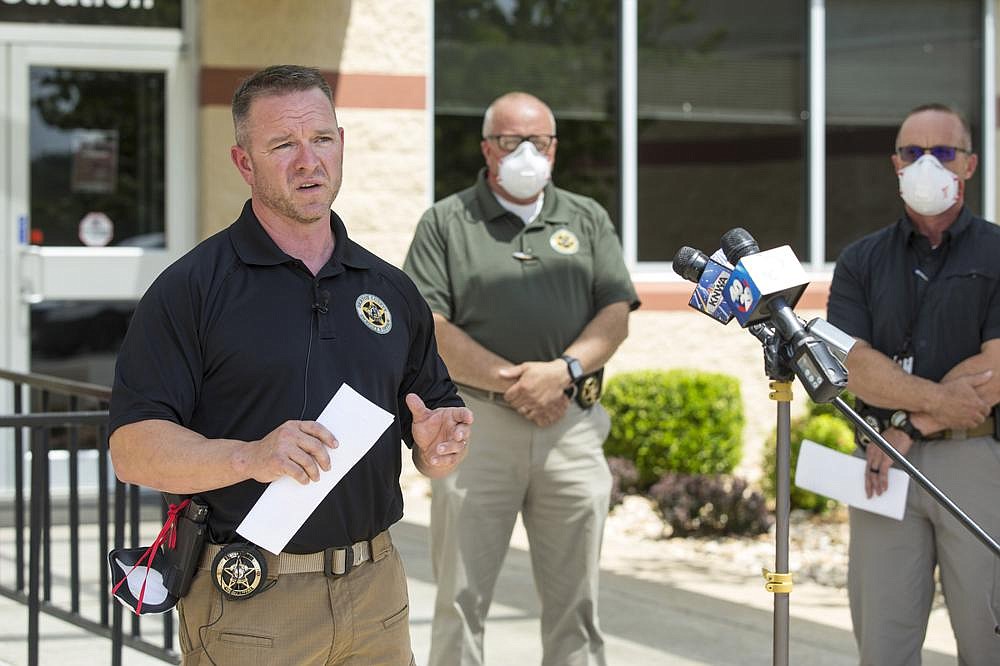