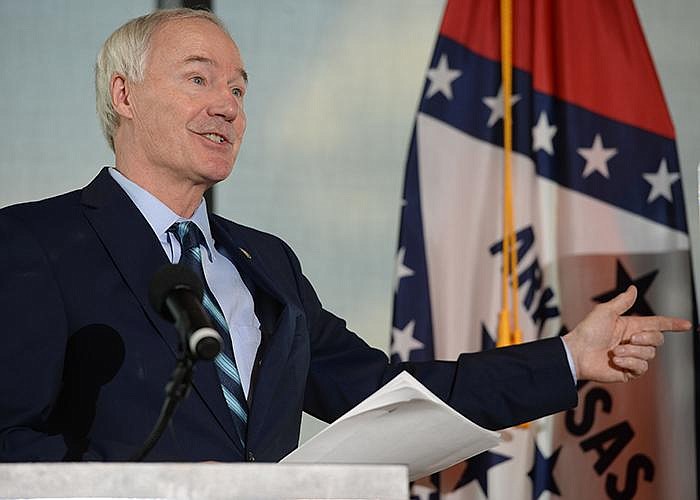 Arkansas Gov. Asa Hutchinson signed an order extending the public health emergency he originally declared in March by an additional 60 days as the state's count of deaths from coronavirus topped 200, including a record 11 deaths that were added to the total on Thursday.

The state's death toll from the virus, as tracked by the Department of Health, rose to 208, while the statewide tally of positive cases increased by 322, to 13,928.

The number of Arkansans hospitalized with the virus, at record levels and rising since Monday, increased by nine, to 226.

Fifty-three of the patients were on ventilators, a number that hadn't changed from a day earlier.

Meanwhile, Benton County Sheriff Shawn Holloway said Thursday afternoon that 164 inmates at the Benton County jail have tested positive for the virus, including one who is hospitalized.

Hutchinson said extending the emergency declaration would keep in place measures such as the executive orders he signed this week granting businesses and health care workers greater immunity from coronavirus-related lawsuits and extending workers' compensation benefits to Arkansans who contract the virus on the job.

He also noted language in the order giving him and Health Department Secretary Nate Smith "sole authority over all instances of quarantine, isolation, and restrictions on commerce and travel."

"Cities and counties shall not impose any restriction of commerce or travel that is more restrictive than a directive or guidelines issued by the Secretary of Health, in consultation with the Governor," Hutchinson said in the order.

[Video not showing up above? Click here to watch » https://www.youtube.com/watch?v=NOqGsef7XKM]

The Republican governor's original emergency declaration on March 11 had similar language, prohibiting cities and counties from instituting "quarantine regulations of commerce or travel" except "by authority of the Secretary of Health."

Despite those declarations, the Fayetteville City Council on Tuesday passed an ordinance requiring masks to be worn in most indoor public places.

"There's not any plan to challenge any of them," Hutchinson said Thursday of city mask requirements, "but everybody needs to understand, if a city rule is more restrictive than the state rule, then it's preempted by the state rule, and so it's state guidance that governs in terms of our policy on masks."

Asked if he considers the city requirements invalid, the Hutchinson said in a statement later Thursday: "The ordinances are valid to the extent they are not more restrictive than directives or guidelines issued by the Secretary of Health.

"Everybody should follow the directives and guidelines issued by the Secretary of Health."

Hutchinson's stance sets him apart from the Republican governors of Texas and Arizona.

After earlier saying that Texas cities couldn't penalize individuals for not wearing masks, Texas Gov. Greg Abbott said this week they could fine businesses that fail to require customers to wear them.

Arizona Gov. Doug Ducey, meanwhile, dropped his opposition to mask ordinances adopted by cities, citing the growth of virus cases in the state.

Fayetteville Mayor Lioneld Jordan didn't return a call seeking comment on Thursday on the city's plans for enforcing the ordinance. Scott didn't have a comment, his spokesman said.

At Hutchinson's daily news conference on the pandemic, held Thursday in Fort Smith, state epidemiologist Jennifer Dillaha emphasized the importance of masks as a way of preventing the virus from spreading.

Health Department directives require them in some settings, such as restaurants and hair salons.

In other public areas, health officials have recommended but not required that people wear them.

"If the majority of Arkansans were to wear their cloth face coverings when they're out in public, we could greatly reduce the transmission of covid-19 in Arkansas, but it's going to take all of us working together." Dillaha said.

Hutchinson pointed to some signs that the spread of the virus was slowing after a record increase of 731 cases on Friday.

He noted that the average number of new cases added daily over a rolling seven-day period had fallen in recent days in each of the Health Department's five public health regions.

"That doesn't mean it's going to be the same tomorrow and the next day, but that's encouraging news for us," Hutchinson said. "Hopefully people are paying attention to our guidelines."

Statewide, the average number of cases added each day over seven days fell from a record of 463 on Wednesday to 445 on Thursday.

He advised Arkansans who go to get tested for the coronavirus when they get back unless they and others at the rally wear masks or are able to practice social distancing, which is generally defined as staying at least 6 feet from other people.

"Let's welcome the president to this part of the country, but let's make sure that we have a high regard for the public health and those requirements that we know are so important," he said.

Hutchinson also said didn't receive any warning before the Kansas Department of Health and Environment added Arkansas, along with Alabama and Arizona, to the list of states from which travelers are advised to quarantine themselves for 14 days after arriving in Kansas.

Six states -- New York, New Jersey, Massachusetts, Illinois, Rhode Island and Connecticut -- were removed from the list, which also includes Maryland. People who have been on cruise ships or traveled internationally are also advised to quarantine.

"That came as a surprise because there's not very many states that are doing that now," he said.

He said he thought it was "a little bit ironic that New York is fine to travel to" but not Arkansas.

"That's just, I think, an aberration from what the other states are doing in handling this," he said.

Arkansas had previously required travelers arriving from New York, New Jersey, Connecticut, New Orleans and overseas to quarantine themselves, but that mandate was lifted Monday when the state entered its second phase of easing restrictions that were imposed to slow the spread of the coronavirus.

The Kansas health agency says on its website that it "uses a number of sources of data including the number of cases each state has and whether the state is reporting widespread community transmission" in deciding which states to include on its quarantine list.

The cases added to the total on Thursday included 46 in Washington County, 33 in Benton County and 23 in Pulaski County.

Infections among prison inmates accounted for 23 of the new cases. Such cases often show up in the statewide total several days after the test is performed after information from laboratory reports is entered into a state database.

At the East Arkansas Regional Unit near Brickeys in Lee County, the number of inmates who have tested positive increased by 75, to 550, according to Health Department reports.

The Benton County jail had just 375 inmates on Thursday, down from 700 in March, as a result of population-reduction efforts by the sheriff's office, working with prosecutors and judges, Holloway said.

He said the inmates who tested positive were being held in a different area from other inmates.

The number of cases in the state that were considered active, meaning the person had tested positive and had not yet recovered, fell from a record 4,413 on Wednesday to 4,344 on Thursday as 380 people were newly classified as having recovered.

The number of active cases fell by five, to 142, among nursing home residents and by 32, to 644, among prison inmates.

The Health Department on Thursday also provided the Arkansas Democrat-Gazette with its rules for allowing visitors, communal dining and visits to barbershops and beauty salons at nursing homes, assisted living facilities and other long-term care facilities starting next month.

Residents or staff who have had "prolonged close contact" with an infected person in the 48 hours before the person tested positive or developed symptoms should be tested.

Such contact is defined as being within 6 feet for more than 15 minutes without wearing recommended protective equipment.

Residents or staff members who have had such contact with an infected person should also be prohibited from having visitors and be excluded from communal dining and using facility beauty salons or barbershops until the test results are available.

For facilities where three to five residents or staff members have tested positive within the past seven days, visitation, group activities, and visits to barbershops and beauty salons for all residents should be suspended for 14 days from the date of the last positive test result.

In addition to people who have had contact with an infected person, the facility should expand testing to all residents and staff in the hallway where the resident lives or areas where the staff member was assigned.

Facilities where more than five people have tested positive in the previous seven days must suspend visitation, group activities and beauty salon and barbershop visits for at least 28 days, once the Health Department approves. In those cases, all staff and residents must be tested.

The rules also require precautions to be taken during visits, such as requiring visitors to wear masks and be screened for symptoms.

In preparation for the resumption of visits, all long-term care facility staff members and residents are being tested this month.

AARP Arkansas "commends state officials for working on a detailed plan that seeks to balance the resident's need for social interaction with the risk of exposure and transmission," the group's director, Herb Sanderson, said in an email.

He noted that federal Centers for Medicare and Medicaid Services guidelines recommend against allowing visits until a state reaches its third phase of reopening.

"As Arkansas has not reached Phase III, the State must exercise thorough and appropriate oversight to protect the safety of residents including monitoring of facilities to ensure the guidelines are followed," Sanderson said.

He also encouraged visitors to follow the Health Department's guidelines and said virtual visitation should be available to residents whose family or friends are physically unable to visit a facility in person.

Three of the deaths that were added to the state's total were in Craighead County, raising its death toll from the virus to five.

The count of virus deaths, as tracked by the Health Department, rose to 48 in Pulaski County, 13 in Union County and 11 in Benton County.

Health Department spokesman Gavin Lesnick said nine of the deaths occurred within the past week, and two happened earlier but were just recently reported.

At Craighead Nursing Center in Jonesboro, the number of residents listed in Health Department reports as having died from the virus increased from two to six.

An additional 20 residents and seven staff members at the nursing home have tested positive, according to the reports.

The department's count of deaths among nursing home residents, as listed on a state website, increased from 72 to 80.

Information for this article was contributed by Tom Sissom and Tracy M. Neal of the Northwest Arkansas Democrat-Gazette. 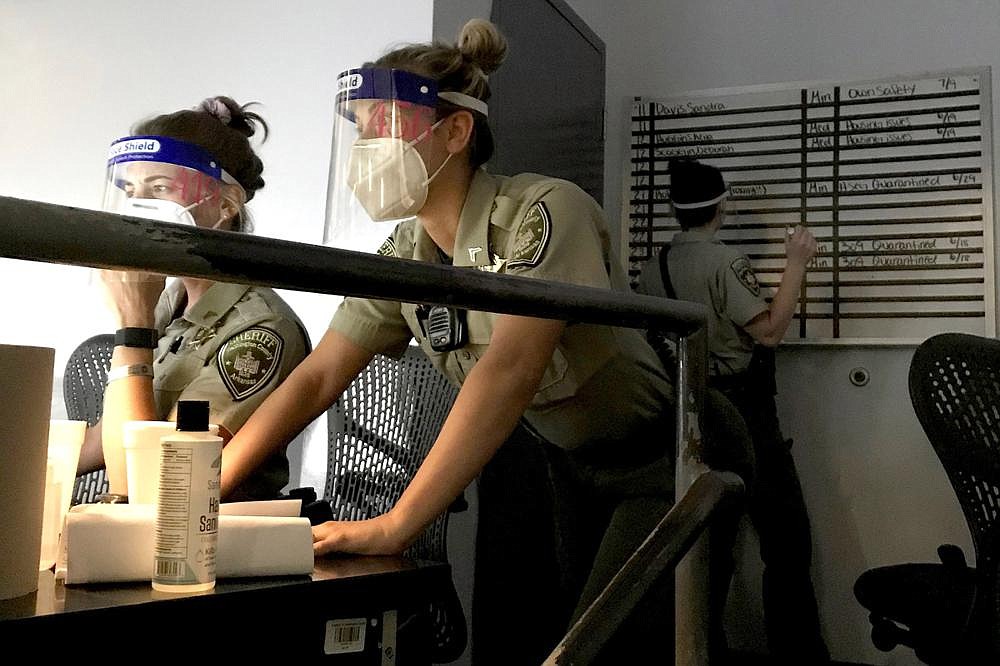 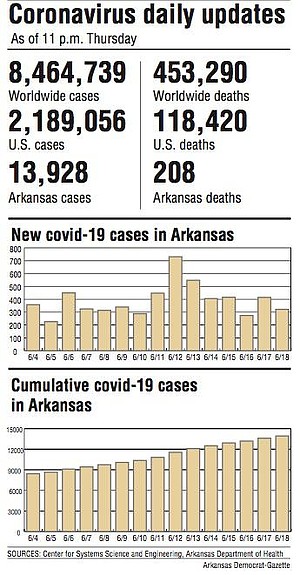