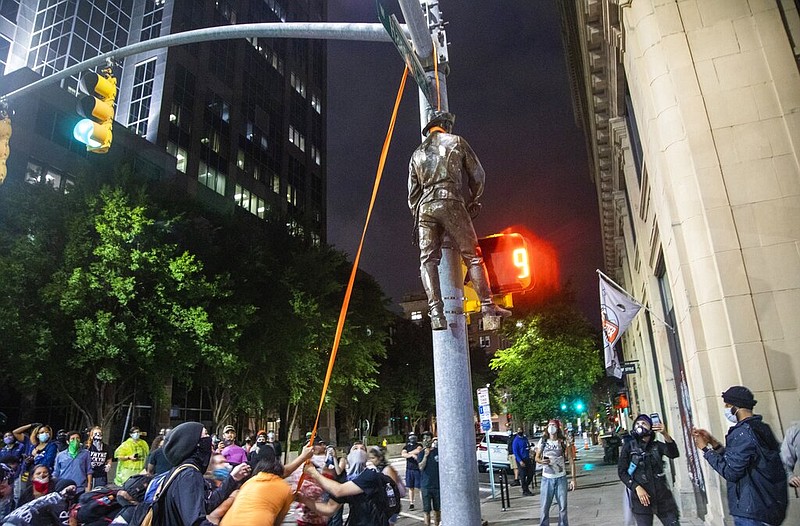 Protesters hang a figure pulled from the Confederate monument at the North Carolina state Capitol at the intersection of Salisbury and Hargett Streets in Raleigh on Juneteenth, Friday, June 19, 2020. (The News & Observer via AP / Travis Long )

RALEIGH, N.C. — Protesters in North Carolina’s capital pulled down parts of a Confederate monument Friday night and hanged one of the toppled statues from a light post.

Demonstrators used a strap to pull down two statues of Confederate soldiers that were part of a larger obelisk near the state capitol in downtown Raleigh, news outlets reported.

Police officers earlier in the evening had foiled the protesters’ previous attempt to use ropes to topple the statues. But after the officers cleared the area, protesters mounted the obelisk and were able to take down the statues.

They then dragged the statues down a street and used a rope to hang one of the figures by its neck from a light post. The other statue was dragged to the Wake County courthouse, according to the News & Observer.

Earlier in the day, hundreds of demonstrators had marched through downtown Raleigh and Durham to protest against police brutality and to celebrate Juneteenth, which commemorates the emancipation of enslaved African Americans.

Numerous Confederate statues have been vandalized or torn down across the South in recent weeks following the death of George Floyd, a Black man who was killed after a white Minneapolis police officer pressed a knee into his neck for several minutes.

Confederate monuments were toppled in nearby Durham and Chapel Hill in 2017 and 2018, respectively.