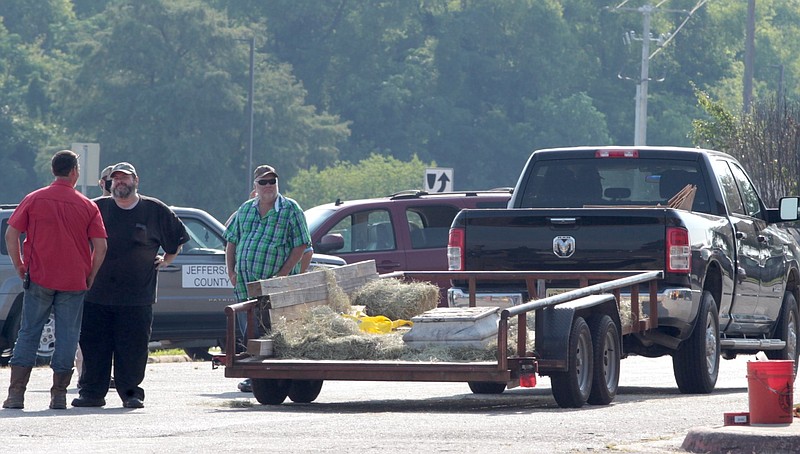 Workers helping to remove the Confederate statue at the Jefferson County Courthouse take a break while waiting for more part of the marble statue to be removed and placed for transport. The statue, according to Deelois Lawrence, a member of the David Owens Dodd Chapter of the United Daughters of the Confederacy, which owns the statue, it is being moved to an undisclosed storage location where it can be cleaned and repaired, and later will be erected at Camp White Sulfur Springs Confederate Cemetery just outside of Pine Bluff. (Arkansas Democrat-Gazette/Dale Ellis)

PINE BLUFF — A memorial marker to the Confederacy that has sat on the north side of the Jefferson County Courthouse for more than 45 years abruptly came down Saturday morning as part of a cooperative agreement between County Judge Gerald Robinson and the United Daughters of the Confederacy, who own the statue. Robinson had vowed over a year ago to have the statue removed, but said at the time that, because it is a historical artifact, he did not want it destroyed.

Just over a year ago, Robinson said that he intended to move the statue from the courthouse, and said at the time that the statue was an inappropriate symbol for the county.

“I think in today’s time we’re trying to move on, especially when dealing with racial harmony,” Robinson said in April 2019. “I don’t think the Confederate statue depicts our country.”

Deelois Lawrence, a member of the David Owen Dodd chapter of the United Daughters of the Confederacy said that she and Robinson have been working to raise private funds to relocate the statue for over a year.

Although not enough funding has been secured to relocate the statue to Sulfur Springs Cemetery, which is owned by the United Daughters of the Confederacy, she said a recent benefactor had made it possible to have the statue moved to an undisclosed location for storage where it can be cleaned and repaired.

"When we first talked to [Robinson] we told him that [the David Owen Dodd chapter] are all ladies who grew up in Pine Bluff," she said. "We love Pine Bluff and we don't want anything to happen to Pine Bluff that causes it to be in the same situation as some of these other towns are."

The 20-foot statue at the Jefferson County Courthouse, which depicts a Confederate infantryman at the top, was erected in 1910 by the David Owen Dodd Chapter of the United Daughters of the Confederacy, according to an inscription engraved onto the base of the statue.

The statue was originally placed on the grounds of Pine Bluff High School on July 22, 1910, according to the Encyclopedia of Arkansas History and Culture. In 1974, the monument was moved to the north side of the Jefferson County Courthouse. It was listed on the National Register of Historic Places in 1996.