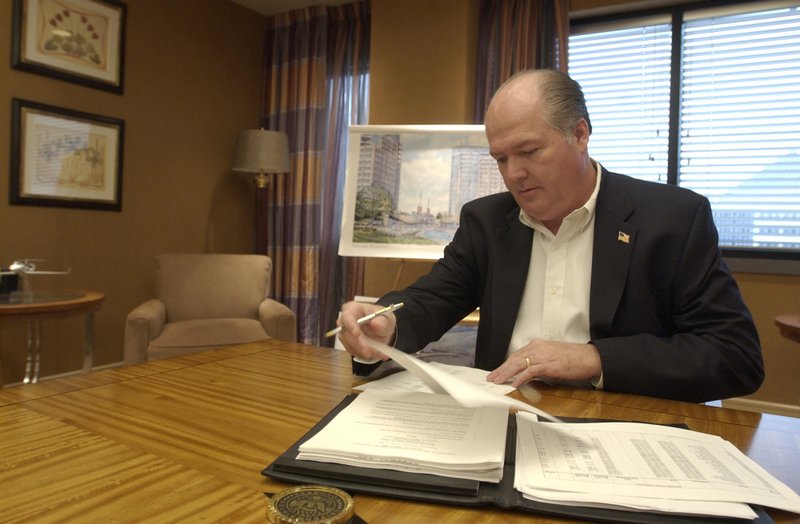 In this 2010 photo, Bill Schwyhart goes over budget figures for the Northwest Arkanas Regional Airport in a Pinnacle Tower conference room in Rogers.

A judge in Texas has approved the sale of the trustee's rights to a third party in the bankruptcy case of a former real estate developer from Northwest Arkansas.

In a hearing Friday on WebEx, Judge Harlin Hale of the U.S. Bankruptcy Court for the Northern District of Texas, approved the sale of the bankruptcy trustee's legal claims in the case of Bill and Carolyn Schwyhart to Recipio Investments Strategic Fund I LLC for $270,000.

Bill Schwyhart and his wife, Carolyn, filed for Chapter 7 bankruptcy protection in Texas in July 2018, claiming more than $90 million in debt, mostly related to business.

On June 8, Recipio was named the winner of an auction of the trustee's legal claims but the deal still required judicial approval. At a hearing the next day, Judge Hale denied the sale of the trustee Scott Seidel's rights to Recipio, contending the sale order's wording indicated the estate owned certain causes of action that were actually the property of Schwyhart creditor CHP LLC.

CHP had objected to some wording of the initial sale motion, contending that while the trustee may sell causes of action of the estate, it should be made clear that those rights don't include CHP's fraud and civil conspiracy claims. CHP contends in court filings that the Schwyharts have tried to hide their assets, including their interest in Pinnacle Villa -- an affiliate of Recipio -- as well as a home in Northwest Arkansas that CHP describes as a multimillion-dollar mansion.

The Schwyharts contend in court documents that they have done nothing wrong. Their attorney has asked the court that their bankruptcy be discharged, saying the couple never intended to hinder, delay or defraud, and that all acts or failures to act outlined in court documents were justified under the circumstances of the case.

During Friday's emergency hearing to reconsider the sale, Davor Rukavina, attorney for trustee Seidel, said the deal with Recipio removes provisions in the earlier sale order that were opposed by CHP.

He said the process was contentious and involved "quite a bit of arm twisting" by the trustee. Rukavina said the negotiations involved "parties that don't like each other, to say the least" but that all were in agreement or not opposed to the sale

"We have something that gets the job done today for everyone," Rukavina said.

The hearing also included mention of a $50,000 administrative claim for CHP that will be considered separately at a later date. According to court documents, the claim is "in recognition of, and compensation for, CHP's actions and services in bringing about a successful auction and sale, at a much higher price than anticipated."

In bankruptcy cases, the trustee's causes of action -- legal claims against another party -- may be considered property of the estate and therefore something that can be sold with court approval. The purchase gives the buyer the ability to step into the shoes of the trustee to use the trustee's powers to pursue a debtor or to choose not to pursue claims.

The sale order indicates Recipio is a good-faith purchaser even though it was alleged to be a potential insider of the Schwyharts. In court documents, trustee Seidel had identified Recipio and others as possible insiders in the case, a claim Recipio's attorneys have denied in an earlier hearing and in court documents.

In court documents and recent hearings, trustee Seidel and his attorney said the estate seems to have claims and causes of action against third parties in the Schwyhart bankruptcy, including Pinnacle Villa LLC and Recipio for potential fraudulent transfers and other causes of action linked to a scheme by the Schwyharts to hide assets, including real property and settlement assets.

In documents, Seidel said the sale of his causes of action was in the best interest of the estate since any trial would probably be lengthy and costly without any guarantee of success. He said the auction format ensured the final purchase price for the causes of action is fair and reasonable.

During the Northwest Arkansas building boom, Bill Schwyhart worked with trucking magnate J.B. Hunt and Tim Graham on the Pinnacle Hills Promenade mall, which opened in 2006. After Hunt's death later that year, his widow, Johnelle Hunt, and Graham broke ties with Schwyhart.

Schwyhart was also one of the investors, along with J.B. Hunt, in the now-defunct charter-jet company Pinnacle Air LLC, which did business as Aspen JetRide. It filed for Chapter 7 bankruptcy protection in early 2009.