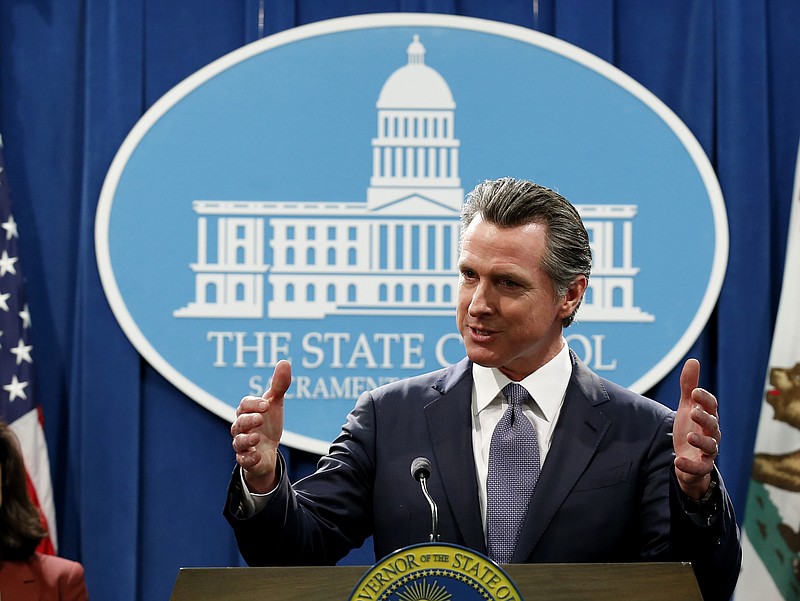 In this March 12, 2020, file photo, California Gov. Gavin Newsom speaks to reporters about his executive order advising that non-essential gatherings of more than 250 people should be canceled until at least the end of March, during a news conference in Sacramento, Calif. (AP Photo/Rich Pedroncelli, File)

LOS ANGELES -- Gov. Gavin Newsom has signed a bill to require county officials to mail a ballot to every registered voter for the November election, cementing into law the Democratic governor's earlier order to mail out ballots statewide in response to the coronavirus outbreak.

Newsom, citing health risks from large groups gathering at polling places, announced in early May that the state will send every voter a mail-in ballot for the fall contest, but his plan has been challenged in court. The bill, approved Thursday by the state Assembly, gives the governor's order the force of law and provides clarity for election officials, said Assemblyman Marc Berman, a Menlo Park Democrat who sponsored the bill.

"No one should have to risk their health and possibly their life to exercise their constitutional right to vote," Berman said in a statement. "In the midst of a deadly health pandemic, giving all California voters the opportunity to vote from the safety of their own home is the responsible thing to do."

In-person voting places will remain available for those who might need them.

The spread of mail-in voting as a reaction to potential health risks from the virus has become a point of conflict between Democrats and Republicans nationwide. President Donald Trump has been among the skeptics and has said that "a lot of people cheat with mail-in voting," without providing evidence.

Historically, there is no evidence of widespread voter fraud through mail-in voting. In the state's March primary, more than 75% of California voters received a vote-by-mail ballot.

The bill was passed 68-5 by the Assembly, with six members not voting. The opponents were all Republicans.

Under current law, mail ballots that have been postmarked by election day can arrive up to three days after the election and still be counted. For the November election, the bill extends that window to 17 days, two weeks later from the current three days.

Republican National Committee member Harmeet Dhillon called the extension to 17 days "bizarre" and predicted it would raise integrity issues with the vote count, lead to more challenges over the authenticity of ballot signatures and extend the date for determining the outcome in some races to December.