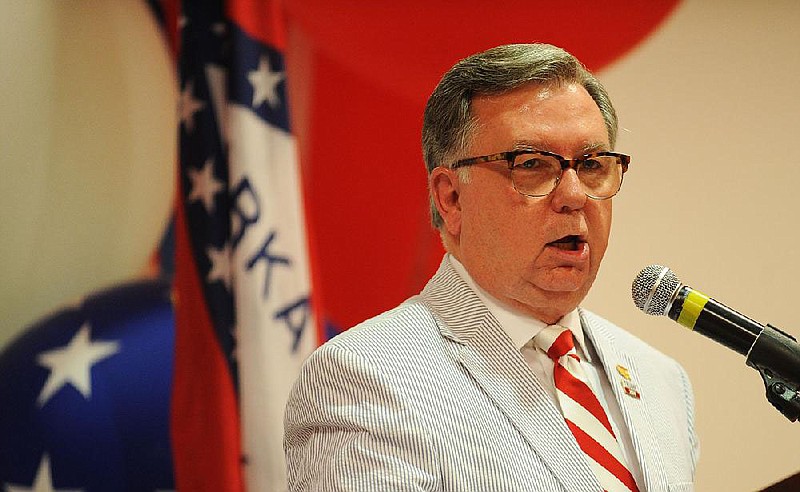 Twenty-five delegates were chosen. Three alternates had previously been picked at conventions in each of the state's four congressional districts; three others are automatically delegates because of their positions within the party.

All 40 are pledged to support President Donald Trump, who won 97.1% of the vote in the party's March 3 primary.

Originally, the delegation was scheduled to head to Charlotte, N.C., to meet Aug. 24-27. Earlier this month, the national party announced that it would shift most of the proceedings to Jacksonville, citing concerns about North Carolina's coronavirus restrictions on crowd gatherings.

Only a handful of Arkansans will travel to Charlotte for the initial activities, according to Jonathan Barnett, the state's Republican National Committeeman. Most will go directly to Florida.

"There's a lot of details to be worked out. ... But we do know Jacksonville wants us," Barnett said.

State Republican Party Chairman Doyle Webb predicted the revamped convention will be a success, despite the change of venues.

"It's going to be making good lemonade out of lemons," he said.

Trump campaign officials hope to have large crowds on hand when the president gives his acceptance speech.

At Saturday's gathering in Hot Springs, however, Republicans stayed spread out.

Gazing upon the audience, Gov. Asa Hutchinson expressed satisfaction with the social distancing on display. Chairs were spaced 6 feet apart. Many of the top party officials wore masks. Handshakes and hugs were scarce; hand sanitizer was abundant.

"I think this is a good illustration of how you can have a meeting under the Department of Health guidelines," Hutchinson told the crowd. "We're handling this in a way that we are adding to the solutions and not contributing to the problems."

The number of coronavirus cases in Arkansas climbed 511, to 15,142, according to Saturday's report from the Health Department. The number of deaths rose 10 to 224.

In his remarks, Hutchinson emphasized workforce data instead of fatality rates, portraying the state's economy as improving.

"People are going back to work. They're creating jobs again," he said. "One of the reasons that we are ... three or four points below the national unemployment rate is because we resisted the temptation in Arkansas and the national pressure to shut every business in Arkansas down."

Another speaker, U.S. Rep. French Hill, highlighted pre-pandemic data, telling the crowd: "In January, we had the best economy in 50 years."

"We created 7 million jobs in the last three years," he said. "We had increased household wealth in this country for all Americans over $12 trillion. Those were the important numbers. Then we had a little virus blow into the country. A little virus from China."

Hill credited Congress and Trump with taking swift action to shore up the economy and protect public health.

"Mother Teresa said, 'Joy, to be fruitful, must be shared.' So let's get out and share the joy of being a Republican running in 2020 to go back to that 50-year record of economic performance, back to the leadership in the world and back to a public health crisis being over and managed," the lawmaker from Little Rock said.

Hill did not run for delegate.

Hutchinson did. Backed by his fellow Republicans, he also was selected to serve as the delegation chairman.