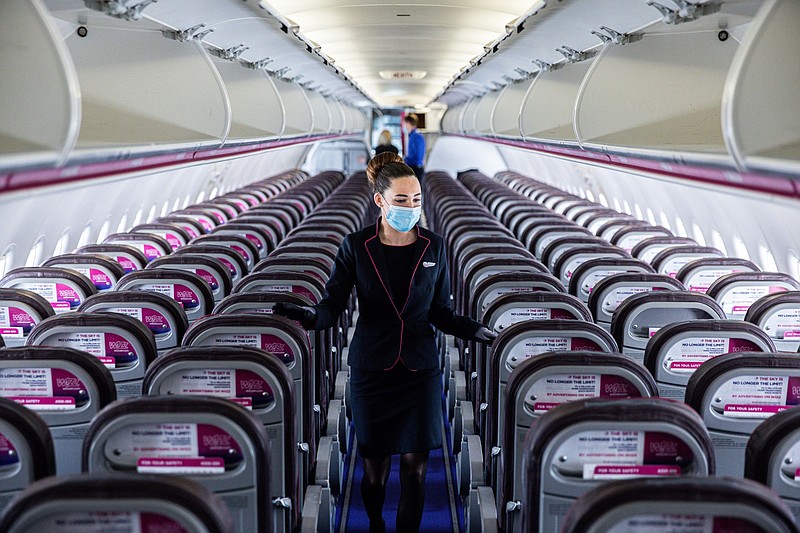 A cabin crew member wearing a protective face mask checks cabin seating ahead of Wizz Air flight at Liszt Ferenc airport in Budapest, Hungary, on May 25, 2020. MUST CREDIT: Bloomberg photo by Akos Stiller.

European airlines are offering some attractive discounts to people itching for an escape from months of coronavirus lockdown. But fares stand to rise quickly as demand picks up.

After months of idled flights, carriers are touting promotional summer prices as they return to the skies, with Ryanair Holdings PLC advertising return trips from London Stansted to Seville, Spain, in mid-July for $25, or Trieste in Italy for a little more than $60. The low-cost carrier's average return fare last year was $83.

"It's a great time to be a consumer," said Mark Manduca, an analyst with Citigroup in London. "You're going to get some great deals. Airlines are looking to fill their planes this summer."

Prices are down about 14% for travel this month and next compared with last year, and about 10% for August, according to data provider Skytra. How long those offers last depends on how fast people shrug off concerns about the virus and their own finances, and how well airlines are able to match capacity to demand in order to retain a measure of control over fares even in a depressed market.

Ryanair Chief Executive Officer Michael O'Leary has said a full-scale price war may be in the cards as European airlines chase market share in the aftermath of the pandemic.

While Ryanair touts its bargains, figures from UBS derived from an analysis of fares suggest the Irish company has the greatest scope to put the squeeze on rivals. Its prices are up around 20% overall for July and August versus last year. That compares with decreases across most other airlines.

Ryanair's ability to take on full-service operators may be limited, though, by multibillion-euro bailouts granted to companies including Deutsche Lufthansa AG and Air France-KLM, which O'Leary says will help them subsidize weaker routes. The U.K. market, Europe's biggest, has also been muddied by a 14-day self-quarantine rule for arrivals that could put people off flying whatever the price.

Fellow low-fare carriers EasyJet and Wizz Air Holdings, which brought back their first services in western Europe last week, appear less enthusiastic about unleashing a fare competition at a time when European consumers generally may have concerns that go beyond the cost of a ticket.

EasyJet CEO Johan Lundgren said recently he'll focus on profitable routes and expects fares to gain as demand begins to match supply. While the U.K. carrier will serve 60% of its usual network in July and 75% in August, daily frequencies will be slashed, with only about 30% of normal capacity deployed.

Wizz, eastern Europe's biggest no-frills carrier, expects to restore 60% of normal capacity by the end of the third quarter and has ambitions to add more western hubs to Vienna, Milan and London Luton. At the same time, chief Jozsef Varadi said this month that he won't be driven by pursuing market share and that the biggest concern is to restore margins and keep costs under control.

What's unusual about the current situation is that airlines are effectively starting from scratch, having lost out on several months of sales that would have steadily filled their summer schedules heading into the year's busy season.

That could limit the extent to which they're able to charge more for what would usually represent late bookings -- tickets purchased within three days of flying now account for 41% of sales, according to the International Air Transport Association. The airline trade group said last week that it has found consumer confidence in air travel has slipped since April.

Citigroup's Manduca predicts that Ryanair will cut fares in coming months and still fly with its planes only three-quarters full as people prove reluctant to resume travel. Pricing might not recover fully until summer 2023, he said.

UBS analyst Jarrod Castle said that while advertised prices point to fare increases at some low-cost carriers in the third quarter, airlines will seek to actively manage revenue and the build-up in capacity, leading to further fluctuations.

"Some consumers, as things open up, might still be a bit hesitant to travel but potentially there's a price at which they do," he said.

Asia could offer a clue to the development of flights and fares in Europe, as the region where the covid-19 outbreak originated has already begun a cautious return to travel.

Carriers there are offering promotions to entice people back on board, with low-fare carrier AirAsia Group offering unlimited flights between 16 Malaysian cities through March 2021 for $93. Korean Air Lines offered a 15% discount on international flights for two years if booked by May 31.

In both the Asia-Pacific region and U.S., where flying never shut down as fully as it did in many European countries, Skytra data portend an upswing in ticket prices for July and August from a year earlier, after drops of about 22% and 12%, respectively, in June.

While rising demand could lift fares, airlines are still likely to lose money. About half of the global fleet remains grounded, while costs are poised to rise as government assistance such as employment subsidies taper off.

The International Air Transport Association estimates carriers will lose a combined $100 billion this year and next, dwarfing the $31 billion loss during the 2008-09 recession. European airlines will shoulder $21.5 billion of that burden in 2020.

The airlines that ultimately emerge strongest in the region will be those that focus on what consumer data is telling them and have the agility to respond while keeping costs "razor low," according to Manduca.

"Short term they can fill their plane at a lower price and still make money," he said. "And in the long term they'll have the ability to take market share from incumbents."