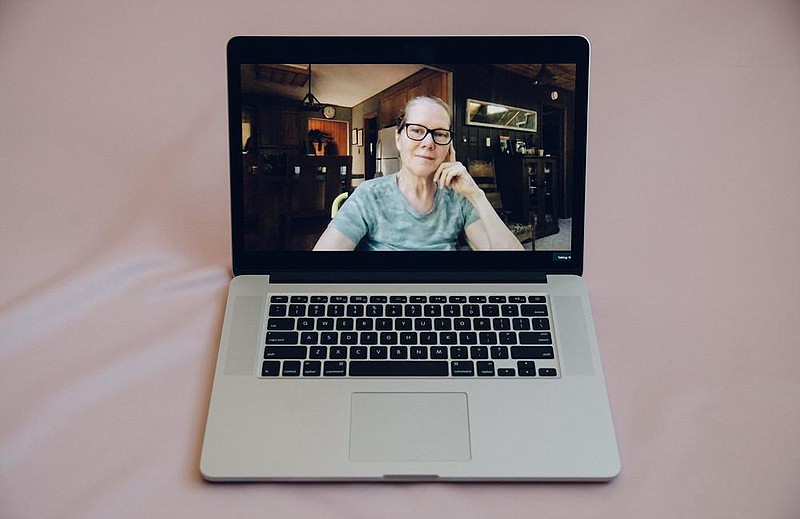 The Broadway actress Rebecca Luker is seen over video chat in New York, June 13, 2020. ‚ÄúWhen I sing, I think it heals me,‚Äù said Luker, who will perform in a Zoom benefit to raise money for research on an ALS drug. (Celeste Sloman/The New York Times)

It takes a lot for Rebecca Luker to sing these days.

After receiving a diagnosis of amyotrophic lateral sclerosis, or Lou Gehrig's disease, last fall, the three-time Tony Award nominee has to use her elbows to prop herself up on the arms of her wheelchair to produce the soaring strains that fans of Secret Garden and Phantom of the Opera have come to know and love, albeit in a lower register -- high notes are hard for her.

Though Luker's prognosis appears bleak -- ALS has no cure and is usually fatal within a few years -- she plans to continue to sing as long as she's physically able.

Luker's Tony nominations came in playing some of the sweetest soprano roles in the musical theater canon: Marian the librarian in The Music Man, Magnolia in Show Boat and Mrs. Banks in Mary Poppins. Her last Broadway appearance was as Helen in Fun Home in 2016.

She spoke candidly about the progression of the disease and the vulnerability that comes with sharing a voice affected by ALS (though her husband, Danny Burstein, a six-time Tony nominee, says she still sounds marvelous).

Q: What did you know about ALS before?

A: A high school friend, a young male athlete, had died of it. I knew only scary things because I saw him right before he died and it was bad. His progressed very quickly. Then I started talking to my doctors and reading more about other people who had it, and it affects everyone differently. You can arrest the disease, or even reverse it, which I'm aiming to do. But right now I am progressing.

I've been told I have a slowly progressing type of ALS, which is giving me hope. But beyond that, I really don't know. Some people live two years, five years, decades -- some even plateau and live many, many years, like Stephen Hawking.

Q: What's the most debilitating symptom you're dealing with?

A: My legs don't work. Not being able to walk is traumatic and awful. And my arms and hands are getting weaker, which is disturbing because without your legs, you really need your arms. I'm just hoping it doesn't get worse.

Q: Has ALS affected your ability to sing?

A: Yes. I have to hold myself up on the arms of my wheelchair to get a full breath of air, and even when I do that, I don't have much of a diaphragm anymore, so there's not a lot of support. It's not easy. I'm not quite sure how I'm doing it. But I'm trying to keep it up because it helps. Physically, it helps my lungs. But more than that, when I sing, I think it heals me. It helps me feel like I'm still a part of something, like I'm doing something that's worthwhile and not just languishing in a wheelchair.

Q: Would there ever be a point when you're still physically able to sing, but you wouldn't want to because you'd be worried that the quality wouldn't be up to your standards?

A: I don't sound like I used to, and that will be pretty apparent to people. High singing is hard because I have no support. But I sound OK. My husband says I sound beautiful. I'm proud that I can still sing.

A: Some days I don't have hope. The days that I do, I think about all the people who love and support me. There are a lot of exciting medical things coming down the pike in 2020. I know that I'm a strong person and that I can beat this.

Q: Has your diagnosis been more challenging mentally or physically?

A: Mentally, because I have all these fears that crop up. And that's saying a lot because the physical toll is huge.

Q: What has this disease taught you about yourself?

A: I'm ashamed of how I let myself get so depressed and angry sometimes. But I've also learned that I can be very strong mentally. And I've learned to somehow keep myself from going crazy, which is easy to do when you're stuck in a wheelchair.

Q: How have you been filling your time?

A: I started watching Ozark on Netflix -- and I'm obsessed -- but I haven't been watching anything of a musical or Broadway ilk. I don't know why I'm staying away from it -- maybe it reminds me of what I used to be able to do and can't now.

Q: How has living with ALS changed your outlook on life?

A: I want to tell everyone how lucky they are. I tell my friends that they can talk to me about their problems, but just to always be aware that if you can walk down the street and you're healthy, you have everything. I'm never going to complain again.