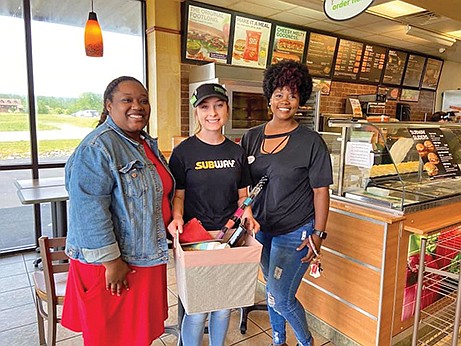 Cassie Halloway, left, and Victoria Stender, right, surprise Rebecca Reardon with some gifts for her dorm. Reardon graduated from Vilonia High School this spring and has worked at Subway for a year. She will attend the University of Arkansas Community College at Morrilton in the fall and plans on majoring in the medical field.

At first, Jessica Lavin, who was a senior at Quitman High School, was upset and frustrated that she was going to miss out on graduation, prom and other momentous occasions this spring as a result of the COVID-19 pandemic.

“It sucked a lot, at first,” Lavin said. “I was really upset about it, but after a while, I got used to it. I still get to talk to my friends, and we are planning on having a graduation next month.”

To help pass the time and get Lavin and other high school seniors through their final year in high school, Victoria Stender, who lives in Conway, created a Facebook group, in which people from all over Faulkner County virtually “adopted” seniors. Lavin’s mom is a friend of Stender’s; therefore, Jessica Lavin was one of the first seniors to be adopted by Stender.

“It was really nice,” Lavin said. “She asked a couple of questions, such as what is my favorite drink or snack, and would surprise me with them. I had no idea what she was going to do, but it was just a fun thing.”

Stender works for ERA TEAM Real Estate in Conway and has a 3-year-old daughter. She said one of the reasons she started the group was because she and her co-workers do a lot of work in the community, and she wanted to find other ways to help its residents.

Lavin, who plans to attend Arkansas Tech University in Russellville this fall, said Stender also purchased a bunch of stuff for Lavin’s dorm, including decorations and a makeup organizer. Lavin said she was surprised how quickly the Facebook group grew.

“It was very small when I first started, and then it just kind of blew up with everyone,” she said. “I met some other seniors through the group, and I think it definitely helped us get through this time.”

Stender started the group in April when she realized most of the seniors this year would not get to walk across a stage for graduation. She said since she started the group, more than 250 seniors have been adopted.

“My expectations for this is that we would get at least 100 people in this group, and they would adopt 20 or 30 kids, and in about a month, we had 1,000 members,” Stender said. “I just did not expect it would grow like it did, and it is not just Conway schools, but there are also kids from Greenbrier and Mayflower.”

Stender adopted four girls, including Lavin, a girl from Greenbrier and two from Conway. Stender said one of the girls mailed her a hand-written note to show how much she appreciated the gesture.

“It brought a lot of strangers together,” Stender said of the Facebook group. “People also posted information on where seniors could get free pizza, free doughnuts or free photo shoots if they wore their caps and gowns. They didn’t have to search for it. Some people even helped these seniors apply for scholarships, which I thought was awesome.

“This is what I was hoping and praying for.”

Carina Martinez’s son, Kristian Reed, was a senior at Conway High School, and this was his last year to play soccer in high school. She said there were many upsetting days leading to the school district’s decision on spring sports. She said for someone from the community to adopt Kristian made him feel special.

“He was amazed that a stranger would take the time to bring some joy into his life,” Martinez said. “It was a pretty neat day and memorable, too. Kristian will attend [Hendrix College in Conway] in the fall and continue to play soccer.”

Barbara Lyons of Conway, who adopted two seniors, including one at Conway and another at Greenbrier, said that at first, she wasn’t going to participate because she wanted to focus on her youngest daughter, Akayla Lyons, who graduated from the University of Arkansas at Fayetteville.

“But I saw a post from a student at Greenbrier, and she stood out to me,” Lyons said. “She was a cancer survivor, and that really stood out to me because both of my parents had cancer, and she had to fight cancer at such a young age.”

Lyons messaged her students’ parents and determined some of their favorite things and bought them each gift cards. She said she also purchased them candies, chips, drinks and other snacks.

“It was really amazing, and I didn’t anticipate that so many people actually chose a student that they didn’t even know and surprised somebody,” Lyons said. “It was a blessing to be a blessing to somebody else, especially in the midst of all they had to go through.”

Gail Dunaway of Conway adopted two seniors, and she said her daughter was one of the first who posted on the site and was adopted. Dunaway said one of the guys she adopted was legally adopted six years ago, after living in foster care.

“It was just really nice meeting him and his family — we stayed in contact,” Dunaway said. “He is attending John Tyler Community College [in Chester, Virginia] this fall and will play football for them.

“I felt so bad for the seniors this year, and I was surprised how fast [the group] grew, because at first it was just a few of us, and now there are people from communities all over Faulkner County.

“This gave them something to look forward to, and it was just something extra to help pass the time as well. It was fun getting on there and seeing all the kids’ pictures.”

Lavin said she was amazed at how some of the parents went above and beyond for their adoptive students.

“Some of the things that stood out to me that these adoptive parents did was place yard signs or balloons in the seniors’ yards,” Lavin said. “To have someone be proud of you for what you have accomplished — that’s what stood out to me.

“I think this community loves to do nice things for others.”