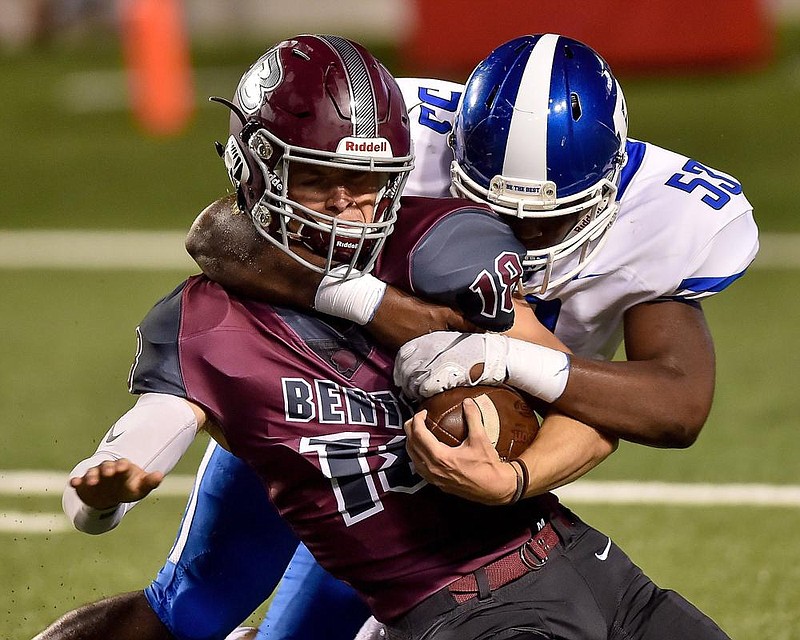 The Salt Bowl has been the state's most-attended high school football games over the past decade.

But with the coronavirus pandemic, an official date has not been set for the 2020 Saline County rivalry game between Bryant and Benton at Little Rock's War Memorial Stadium and contingency plans are being made for the event.

Shane Broadway, the Salt Bowl Committee's spokesman, told the Arkansas Democrat-Gazette that the tentative date for the game is Saturday, Aug. 29. Little Rock Catholic, which uses War Memorial Stadium as its home stadium, is scheduled to host Jonesboro the day before.

The Arkansas Department of Health currently has the state in Phase Two of its plan to roll back capacity restrictions. Phase Two requires large outdoor venue to limit events to 66 percent capacity. War Memorial Stadium's seating capacity is 54,120.

Broadway said the committee has had two meetings regarding the 2020 game and will have a third meeting this week. The meetings have included War Memorial Stadium's staff and administrators from Bryant and Benton school districts, including Bryant Athletic Director Mike Lee and Benton Athletic Director Scott Neathery.

Broadway said the Salt Bowl is operating as if there will be fans at this year's game.

"We would be likely be the largest event occurring since March and before college football," Broadway said. "We've reached out to the health department. If we need to take temperatures and social distance, we'll do it. We may have to limit people on the field.

"If we need to be the test for the health department, we'll do it."

Increased guidelines are nothing new for the Salt Bowl.

After the 2018 Salt Bowl was marred by a fight in the stands which led to what the Arkansas Parks and Tourism Department called a "mass panic situation," new safety and security measures were put in place at the stadium. Only clear bags are allowed, and there are metal detectors in place at each gate.

Broadway said the goal is to still have the game at War Memorial Stadium, with or without fans, citing the committee's relationship with the stadium.

"War Memorial Stadium has been a big part of this game," Broadway said. "We want to find a way to play it. Everybody is understanding the pandemic. We will have to listen to the advice of the experts.

"The kids like playing at War Memorial Stadium. It's a memory they'll always have."

Kenny Simpson had opportunities to move on in his coaching career.

But after nine seasons at Southside Batesville, Simpson decided to make the leap to a place that he considers a dream job.

Simpson was hired June 11 as the new head coach at Searcy.

Searcy is the defending Class 6A state champion, but Mark Kelley resigned in May after five seasons.

The Lions turned to Simpson, an Alabama native who graduated in 2004 from Harding University in Searcy. Simpson, who went 45-50-1 at Southside Batesville, led the Southerners to a share of the 2-4A Conference championship last season.

"I didn't know when the time would come for it to open," Simpson said of the Searcy position. "But I wanted to make sure Southside was stable. It's now a stable program and in a good position.

"It's bittersweet and hard to leave a place like Southside."

Simpson said Southside Batesville and Searcy have participated in team camps together in the past. He said the Lions' players are similar to what he had with the Southerners.

"They're gritty, hard-nosed and tough," Simpson said. "That fits my personality of wanting to play with a fire and intensity."

Simpson's first game with Searcy is scheduled for Aug. 28 at Cabot. But he said he is attempting to have the Lions not look too far ahead.

"For me, let's focus on right now," Simpson said. "I told my kids all the time when they ate their elephant [crackers], one bite at a time. We look so far ahead, sometimes, that we forget the details.

"We want our players to be more than just football players. We want them to be good in the community and represent us well."

However, Atkins Superintendent Jody Jenkins decided that with his football program's coaching vacancy, he wanted to go for the interim route for the 2020 season.

Matt Porter, who was Atkins' defensive coordinator, will be the Red Devils' interim coach this season. He takes over for Tommy Cody, who retired in May after nine seasons at Atkins.

Jenkins said covid-19 was the main reason for deciding not to hire a permanent head coach.

"I would have hated to have someone pack up from whatever they were at to come here," Jenkins said. "I don't know when it [the virus] will go away. We had some good applicants and interviews. But I couldn't pull the trigger with all of the unknowns."

Atkins will open the position back up after the 2020 season, Jenkins said.

The Red Devils open the season Sept. 4 against Dover.

North Little Rock has hired Arkadelphia assistant coach Chris Kizer to serve as the Charging Wildcats' defensive coordinator. Kizer is reuniting with Coach J.R. Eldridge, who left Arkadelphia in March for the North Little Rock job. With Kizer as defensive coordinator, Arkadelphia won two consecutive Class 4A state championships in 2017 and 2018. ... New Arkadelphia Coach Trey Schucker made three hires to his staff this past week, hiring Bobby Evins, Stockton Mallett and Andrew Steely as assistant coaches. Mallett, a former Yellville-Summit and University of Central Arkansas lineman, will be the Badgers' offensive coordinator and offensive line coach. He was Beebe's offensive line coach last season for Chris Gunter. Evins, who spent the 2019 season at Bryant after working at Jacksonville and Texarkana, will coach Arkadelphia's defensive line. Steely arrives in Arkadelphia from Episcopal Collegiate and will coach wide receivers. ... Des Arc is expected to promote assistant coach BJ Paschal to head coach at its monthly school board meeting Monday night, Des Arc Superintendent George Kennedy said. Paschal has been at Des Arc since 2017. The Eagles finished 9-3 in 2019 and won the 6-2A Conference championship.